Dr. Brien Seeley, Founder and President of the CAFE Foundation, hosted the evening and introduced your CAFE blog editor, who gave an overview of innovations in aircraft, avionics and powerplants he’d encountered on his daily hikes around Wittman Field.

Dr. Seeley had the honor of presenting this year’s PADA trophy to John O’Leary, Vice President and General Manager of Airbus Americas Engineering (AAE), for the parent company’s development of the E-Fan, a twin-motored personal airplane that has been a highlight of the Paris and Farnborough air shows.  With the flying displays behind it, the proof-of-concept machine will be the basis for two-seat (E-Fan 2.0) and four-seat (4.0) production variants that will bring smooth electric power to private flight.  The two-seater, which can double as a training vehicle, will be in production by the end of 2017.  The larger 4.0 would be introduced two years later. 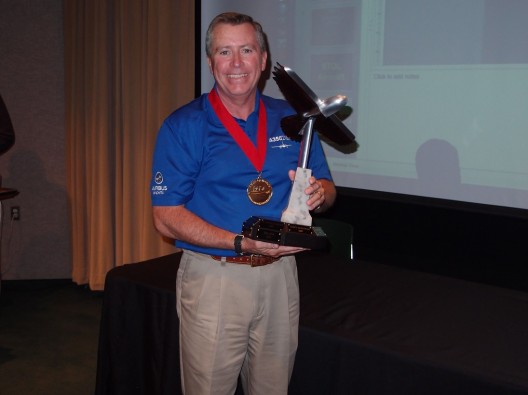 The two-seat E-Fan 2.0 and four-seat 4.0 aircraft will be produced by a new Airbus subsidiary, VoltAir, in a new factory at Bordeaux’s Merignac airport in France. Airbus Group Innovations is developing a “range extender,” a kerosene-fueled generator to charge batteries in flight on the 4.0  and potentially extend endurance by as much as 1.5 hours.

Airbus “believes aircraft prices will be competitive with similar-sized piston-engined aircraft. Operating costs are targeted at one-third of traditional piston-engine light aircraft, with a ground-based charging unit able to bring the aircraft back to full endurance in just 1.5 hours.”

E-Fan 2.0 and 4.0 will have fixed gear, prices competitive with existing aircraft, and twin electric power

As reported by Torkell Saetervadet, Executive Editor for the Norwegian magazine Fynytt, O’Leary noted, “Airbus is a fantastic company, but we are also a great company. In a project like this, it is convenient to work with a more compact organization. Therefore, we as recently as a few days ago established the wholly owned subsidiary Voltaire to develop and market the aircraft.”  Gilles Rosenberger and Aerodev will undertake industrial design for the facility and for the manufacturing processes involved with the new aircraft.

O’Leary explained that Airbus will, besides the Bordeaux plant, rely on Powerhouse, a facility near Munich that will develop electric propulsion systems in “close cooperation” with Siemens.

The new aircraft could include electronic control touchpads and morphing wings and control surfaces that would do away with traditional hinged surfaces.

The importance of this award can be measured by the achievements of past award winners.

The awards ceremony, highlighted by a trophy designed and crafted by Dr. Seeley and his son Tim, was followed by two detailed presentations on highly innovative new designs.

Oliver Garrow presented the technical details of a new tilt-wing VTOL aircraft—the Elytron.  The fourth iteration of a long-term effort to produce a practical machine that is simpler and better performing on less power than a helicopter, Elytron was on display all week in the Innovation Center as a two-seat, full-size display.  Its pivoting central wing is key to its ability to rise and descend vertically, and according to Oliver, is simple to fly and control. 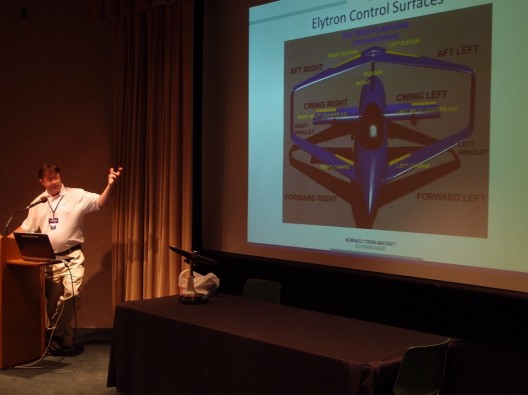 Oliver has flown the three preceding generations of craft, in radio-controlled form, on the field at NASA Ames Research Center in Mountain View, California.   The Elytre is both an extension of those designs and a significant change.

Oliver explained the cost breakdown for the original powerplant concept that would have cost over $180,000, with dual YASA motors, engines, generators and batteries.  The final choice of a Suzuki/Habayusa 1.4-liter unit may be a bit controversial, but it is less expensive at under $25,000.  Gearing and power transfer to the large dual propellers should be a daunting task.

With a pivoting main wing and all else retaining its position throughout flight, the aircraft may achieve the simplicity of flight that Garrow seeks to achieve.

Richard Hogan from Commutercraft presented “The Innovator—a New 3-surface Aircraft,” the prototype of which was on display all week near the Homebuilders Hangar.  Richard emphasized that despite folding wings and electric wheel motors, the Innovator is a roadable airplane – not a flying car.  The 120 pounds of batteries and a ground tractable landing gear enable the pilot to “drive” the compact airplane home to a safe spot in the carport or driveway.  It is not meant to take long trips on the ground, but to simplify trips to the airport (no car to park), reduce costs for hangars and make aircraft ownership far more convenient.  It’s a head-smacking (why didn’t we think of that?) elegant solution to an age-old pilot problem. 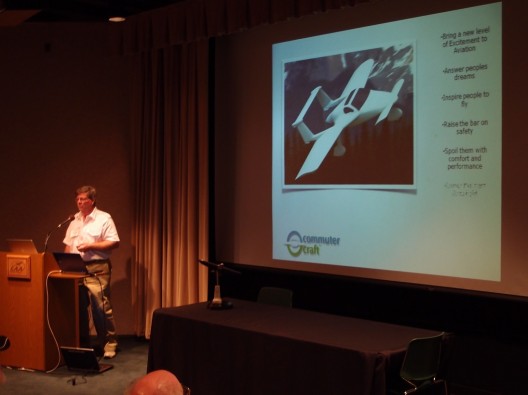 Richard Homan discusses the benefits of his three-surface flyer

The three-surface configuration certainly drew crowds throughout the week, and the tight installation of all components evoked a bit of wonder at the careful planning that went into the Innovator’s construction.  Despite that, Richard assured all that 250-pound Americans would have no trouble fitting, nor would they disturb the center of gravity or payload limits.  The airplane is promised to have excellent performance, handling , range and comfort.

The Prize award, two exceptional lectures on exciting new aircraft, and the opportunity to gain insight into creative minds hard at work – what more could one ask as part of truly experimental aviation?