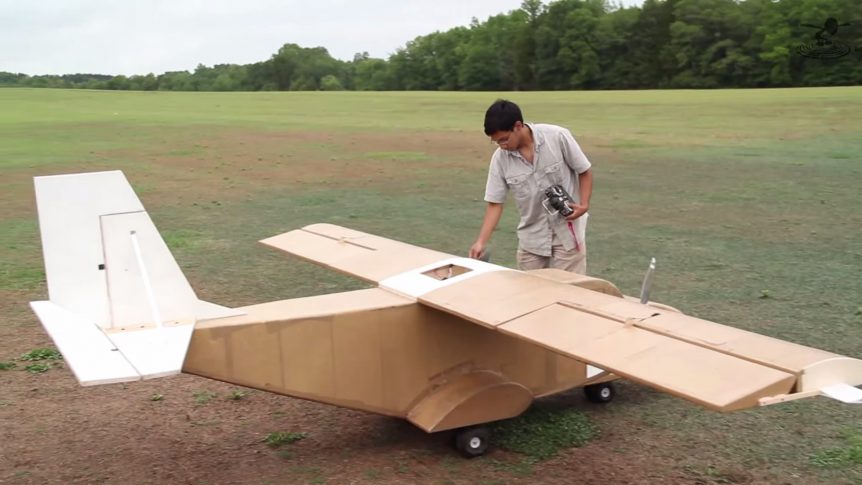 Peter Sripol is a high-energy model-airplane tester who put a twin-motor electric biplane together out of Home Depot/Lowes parts and flew it successfully.  That was a back of the envelope design that flew nonetheless.

Peter did something a little more professional for his second go-round, crafting some professional-looking drawings.  Don’t look for any drawings for the earlier machine, he cautions, explaining there are none  He also wanted a pair of larger, slower turning propellers to move a large volume of air more slowly than the Rotomax 150s installed on the biplane.  He notes he’s looking for a lower kV (turns per Volt input).

Peter works with Flite Test, a model airplane outfit seemingly willing to try anything.  That includes the giant cardboard twin-motored craft shown in the lead image.

He apologizes for not being further along on the project, but notes he took time out to build a tank(!) for a video-game client.  Let this be a rebuke to those who claim they don’t have enough tools in their workshops.  Peter’s neighbors might be excused for being a bit nervous about his Fourth of July celebration.

He gets the airplane outside, only to speculate on whether the gear is strong enough for even his light pilot weight.  In literary criticism, we’d identify this as foreshadowing, a device for letting the reader or viewer know something important’s going to happen later in the narrative.

His third video begins with the collapse of his landing gear, with a flashback to show the airplane’s wing construction and a lead-in to how this sad event came to be.

Here, we get a close-up of the motor, a Tiger Motor (“The Safest Propulsion System”) U15 made in China and rated at 100 rpm per Volt.  Weighing only 3.4 pounds it puts out 77 pounds of thrust with a 40″ prop.  It cranks that out at 3,543 rpm at around 60 Volts and 115 Amps if my math is correct.  The motors are $689 each and the props come as a clockwise/counterclockwise set for $448.  Peter may beat your editor on cheapness.  The company doesn’t seem to have a 200 Amp ESC, though, so it must be another firm’s controller involved.

We’re looking forward to Peter getting his Mark 2 back on an improved gear and flying safely.  His example shows that enthusiasm, hard work and a wildly optimistic outlook can accomplish almost anything.