Pie Aeronefs, a small team of dedicated builders in Switzerland is putting the finishing touches on the UR-1, a V-tailed, battery-winged electric racer expected to fly in next Air Race E series.

“Marc Umbricht’s vision is to create a 4-seater general aviation electric aircraft that shall equal or surpass the performances of standard piston engine aeroplanes. This new generation aircraft will bring a viable and sustainable alternative on the general aviation market.”

To achieve this ultimate goal, the Pie Aeronefs team has a series of iterative designs to explore, starting with a single-seat eRacer.  The small aircraft development firm in La Sarraz, Switzerland is on track to complete the airframe of its UR-1 Air Race E machine soon.

Innovative in the extreme, the small craft will store 12 in-series 10-kilogram (22-pound) battery packs in its wings.  Each 55-Volt pack stores 1.15 kilowatt hours of electricity.

The 13-member team chose lithium-ion polymer cells for their battery packs because they offer, “The best balance between power output and safety, despite the fire risks inherently found in Lithium-ion batteries.”  To protect the batteries and distribute their weight across the wing’s span, the group built a wing “with appropriate rigidity, as a flexible wing may damage the batteries.”  They’ve also designed “an original battery fire protection system in addition to a liquid cooling system.”  Stay tuned for more on this feature.  Part of that may come from the basalt fiber containers in which the batteries are ensconced.

Heat loss from the electric motor, controller, and other electronics will be dissipated through radiator plates on the inner skin of the fuselage.  This is similar to the radiator tubes that ran down the sides of the Supermarine S5 and S6 Schneider Cup racers in the 1930s. 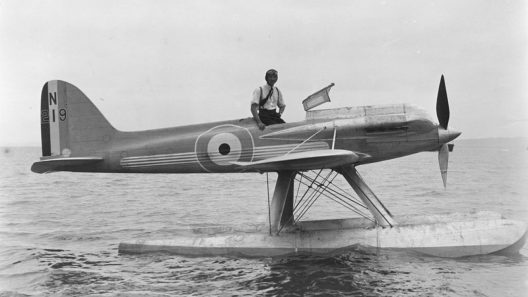 Supermarine S5 was predecessor of Spitfire, WWII fighter. Tubes running along fuselage cooled engine, much like inner skin on UR-1 cools the motor

All that stored energy will be fed to an Emrax 12-inch diameter motor weighing 40 kilograms (88 pounds), putting out 150 kilowatts (203 horsepower).  That’s projected to be enough to pull the 400 kilogram (880 pounds) maximum weight UR-1 around the pylons at up to 302 knots (560 kilometers per hour or 348 mph).  Racing four laps around the Air Race E course will probably see lower speeds because of the high G-force turns.  The projected 90 kilogram (198 pound) pilot will be subjected to those forces 16 to 20 times during a quick, intense race.

UR-1 has a fixed landing gear in accordance with the rules, and slotted flaps to slow things down for take-offs and landings.

The V tail is an approach to reducing interference drag, that part of the drag profile that comes from wings butting up against the fuselage, for instance, and tail surfaces interfering with each others’ airflows.  Eliminating one part and making the remaining two perform all functions simplified the airflow, but makes it a little harder to manage the stresses on the tail cone.  That may be why UR-1 has a fairly thick protrusion – looking a bit like what ornithologists call the “Pope’s nose” on a bird.  (Your editor is not making that up.)  Much like the aircraft, the bird may need that for structural reasons, all the tail feathers poking out from the bulbous posterior and needing muscles to move them appropriately.

On June 18, 2021, the EAS (Experimental Aviation of Switzerland) association approved the UR-1 project. a crucial step to permit the first Swiss all-electric race plane to fly.

In Switzerland, EAS offers support and help to every project in the experimental aviation field. According to Pia Aeronef, “They work with the FOCA (Federal Office of Civil Aviation) and are in charge of the supervision of the construction and the maintenance of self-built planes. The EAS association is actually managing the development of more than 130 aircrafts.”

UR-1 is a simple, straightforward design compared to what Marc Umbricht has envisioned for the future.  Following, if all goes well, could be UR-2, a distributed electric propulsion (DEP) race plane.  That would give way to the UG-3, a certified electric General Aviation craft capable of flying 500 nautical miles at 120 knots indicated air speed.  It could land and take off in 500 meters (1,640 feet).  Finally, Umbricht foresees the UB-4, a long-range short takeoff and landing (STOL) business jet with a 6,000 NM range, cruise of Mach 0.8 (613 mph!), and a 900-meter (2,952-feet) takeoff and landing distance.

It’s nice to see an enthusiastic group keeping a timeline and their ambitions on track.  We wish them well and safe racing.