One of the things that attracted your editor to the idea of electric flight was the introduction of powerful little permanent magnet motors in model airplanes.  With people like Jean-Luc Soullier and Brian Carpenter having used or exploring the use of model aircraft motors on their small, but people-carrying aircraft, we know that flight with these little marvels is possible. 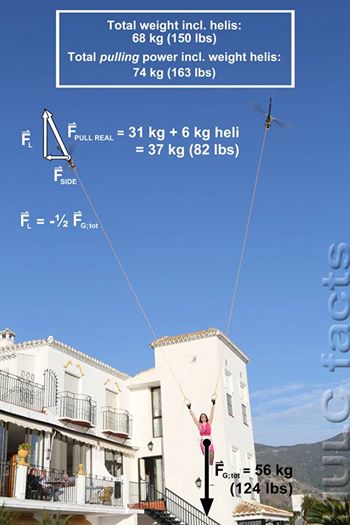 This vector diagram shows the forces involved and gives away the young lady’s weight – not very chivalrous!

But nothing prepares one to take in the flight of an attractive (human) model carried aloft by two H. U. L. C. (Heavy Ultra Lift Crane) model helicopters.

According to The Blaze, “’This is the first time in the world that a human person is being lifted by a remote-controlled aircraft,’ said Tobias Wagner, Heligraphix and H.U.L.C. pilot.”

“The team used upgraded Gaui X7 ‘megatron’ helicopters outfitted with some seriously heavy-duty components, to give each of the two model helicopters 10 kW of constant power, Wagner said.”

The team had performed an earlier, single helicopter lift with their eyes on achieving a person lift – the first for this type of model aircraft.

Maybe someone, somewhere, is planning a two-person lift.  Who knows what applications this heavy-lifting technology might find?