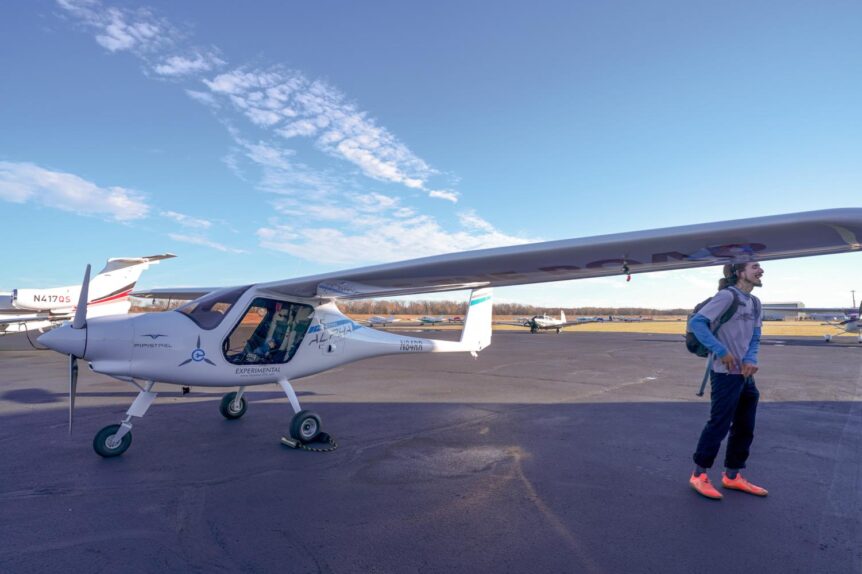 Last week, we reported on the planned flight from Hartford, Connecticut and back in a Pipistrel Alpha Electro.  Lafayette College student Remy Oktay devise a clever way to recharge the airplane along the way, enlisting a small fleet of Ford F-150 Lightning pickups to charge the small craft.  Remy managed to fly over the school’s football game that weekend, something even Super Bowl fans won’t necessarily see.  The scheme worked exceedingly well. as reported by the school newspaper and repeated here.  Jenny Davis did an admirable job of reporting on a complex project. 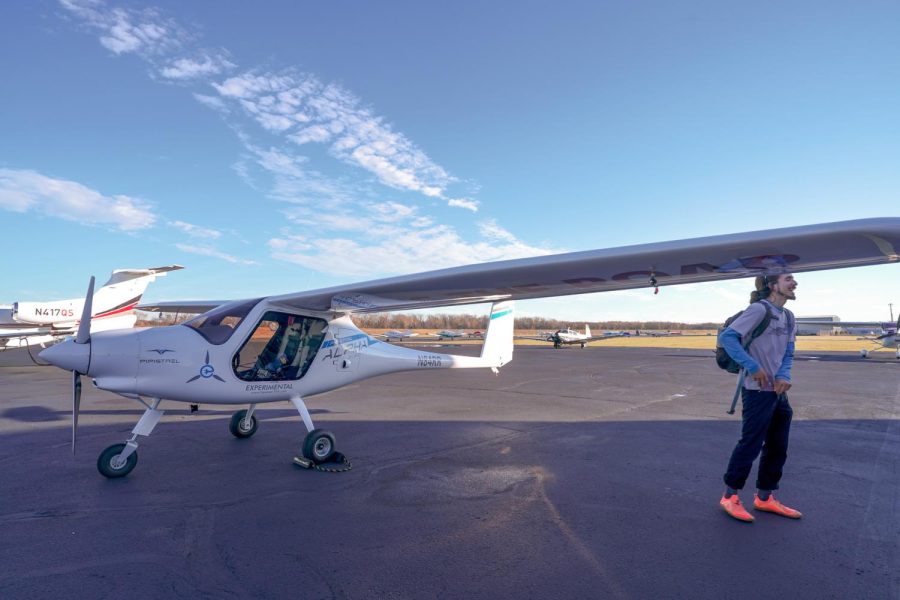 Remy Oktay ’24 plans to fly an electric airplane over the Rivalry game, a first-of-its-kind feat. (Photo courtesy of Lafayette Gets Electric)

With the help of Lafayette students, electric vehicle enthusiasts, pilots and environmental advocates, Remy Oktay ’24 set a world record this past weekend by traveling interstate with an electric airplane that was powered only by electric vehicles.

“If what you’re trying to do doesn’t break the laws of physics, the laws of this country or the laws of your moral compass, then you do whatever it takes,” Remy Oktay said.

And he did. Oktay spent approximately 350 hours coordinating with airports, reaching out to Ford F-150 Lightning owners and recruiting Lafayette students to serve as a documentary film crew all to accomplish and record one of two world records that will be set this week. The second record will be set on Saturday with a flyover of the Lafayette-Lehigh rivalry game – the first-ever flyover of a sporting event with an electric aircraft.

Remy Oktay’s plan to do a flyover of the rivalry game began about 11 weeks ago. However, it developed into something much larger when he decided to travel from Hartford, Conn. to Easton with the electric airplane, stopping only three times to recharge it using the power from electric vehicles.

Zach Fiske ‘23 coordinated one team of electric vehicles on the trip.

“[Remy’s] projects were always very exciting,” Fiske said. “We have film crews and newspaper people, and another ops team, which is amazing. So it’s crazy how much it’s snowballed.”

The electric plane, a Pipistrel Alpha Electro, is one of the only electric airplanes on the East Coast and is owned by Phil Smith at Hartford-Brainard Airport in Hartford, Conn.

“I think it’s just such a beautiful representation of Lafayette students,” Hurd said. “I mean, he found alums to help. He networked with all sorts of corporations … he really put his arms around the whole Lafayette family.”

While alum and administrative involvement greatly supported the journey, President Hurd allowed Remy Oktay and other students to take the reins.

“I think, one, that’s an incredible testament to President Hurd, and two, just so awesome that we’re able to do that,” Remy Oktay said.

Rutka was excited to share the Pipistrel airplane with Remy Oktay and his crew.

“Electric [aviation] is here,” Rutka said. “It’s going to be here to stay.”

Matt Troy, a film professor at New York University, led the student film crew in an effort to gather footage for a short documentary of the journey. The documentary is to be finished in the coming weeks in time for the team to apply to the Guinness World Records, Remy Oktay wrote in a follow-up email.

Troy’s interest in both sustainability and film led him to work with Remy Oktay and the group of Lafayette students.

“Aviation is changing and there are electric airplanes, and trying to promote that aviation can be better for the planet if we all get behind and support it,” Troy said. “I want to help tell that story.” 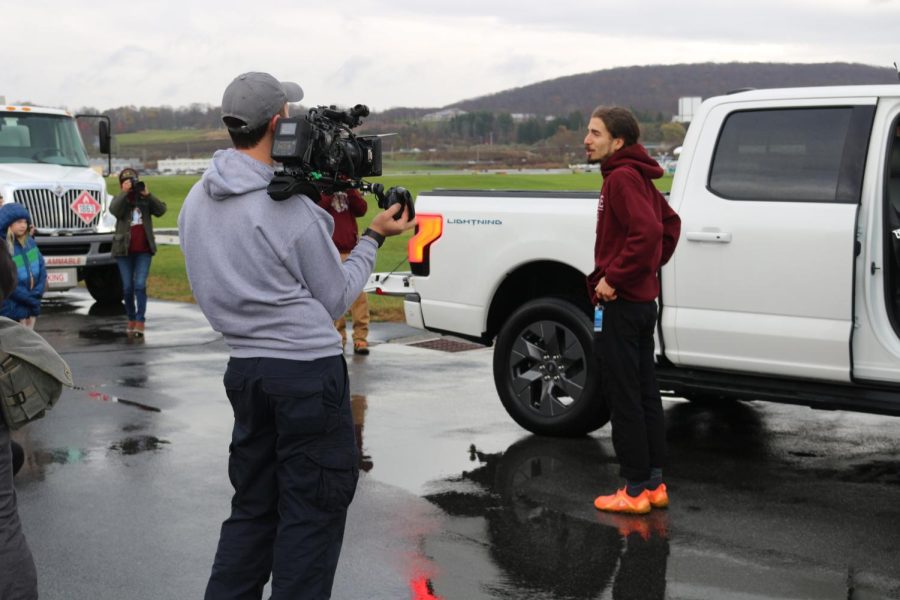 Photo by Jenny Davis
A group of volunteers led by Matt Troy, left, recorded the project for an upcoming documentary.

Upendra Pandey ‘23 was a part of the film crew recruited by Remy Oktay.

“I made this experimental film for my class … and I projected my film inside Remy’s bus,” Pandey said. “He reached out to me: ‘I have this project if you want to get involved.’ And after that, we talked with Matt and the film crew … and planned a bit then that’s it. That’s how [I’m] here today.”

At the start of the trip, four F-150 Lightnings, three Teslas, a Cessna aircraft and a helicopter transported the crew to document the trip. At each stop, power from the trucks was harvested and used to recharge the electric aircraft as people and press gathered to meet Remy Oktay and the crew.

“[The] F-150 Lightning is, I think, as of right now, the only electric vehicle that you can take electricity out of as opposed to putting it in,” Feza Oktay, Remy Oktay’s father and one of the Tesla drivers, said.

Mel and Lisa Hardy, two Connecticut residents that drove one of the F-150s, said that they joined the journey and tested charging the airplane by using power from the truck before the trip.

“I just had seen an article about the plane about two weeks prior in our local paper,” Mel said. “I think you’re going to open people’s eyes to not only electric vehicles but also electric planes, and the possibilities are endless.”

Technology nuts, Ford fans, sustainability proponents and electric vehicle enthusiasts alike demonstrated interest in the Lafayette Gets Electric project by meeting the crew at airports and sharing photos and videos on social media on Saturday.

“I came across this on Twitter when the CEO of Ford tweeted it out,” Mike Gilbert, a Lightning owner who met the crew at Danbury Municipal Airport in Danbury, Conn. said.

“I actually shared this with two of my friends. One … has a Lightning, and the other has his personal pilot’s license and is interested in aviation. So it was on both sides of that fence, right?”

“I heard about it from a friend of mine … and I live nearby so I thought that sounds pretty cool,” Bickel said. “Electric is the future for everything.”

“I’m an EV enthusiast,” Chastain, a former computer engineer said. “I found out about the event from a Citizens Climate Lobby post from a friend of mine … and while I was at a Walmart charging with Electrify America yesterday, I met Jon, who’s in one of the F-150 trucks and just happened to casually mention, you know, have you heard about this electric airplane thing?”

“He told me he was involved with it, showed me the flight plan, and that’s when I committed to come out from about forty minutes away in Newburgh, N.Y., so definitely worth coming out,” Chastain said.

After leaving Danbury Airport, the crew faced a few complications, particularly with the helicopter.

A mechanical malfunction rendered the helicopter unusable and Rutka, the pilot, returned to Hartford in the Hardys’ truck. Even without all of the vehicles present from the beginning of the trip, the electric aircraft successfully made its way back to Easton.

“I think this is a great example of approaching projects with an engineering and/or pilot’s mindset of having backup plans,” Remy Oktay said. “Preparing for the worst, hoping for the best and improvising the rest.”

Trebor Maitin ‘24 led another group of vehicles from Hartford to Easton on Saturday and managed the team’s social media.

“It’s going to show not only the capabilities, but the possibilities of the electrification of vehicles,” Maitin said. “To say that, you know, some college kids can do all this, it goes to show that … while electric vehicles right now may be intangible for most people, they won’t be for long.” 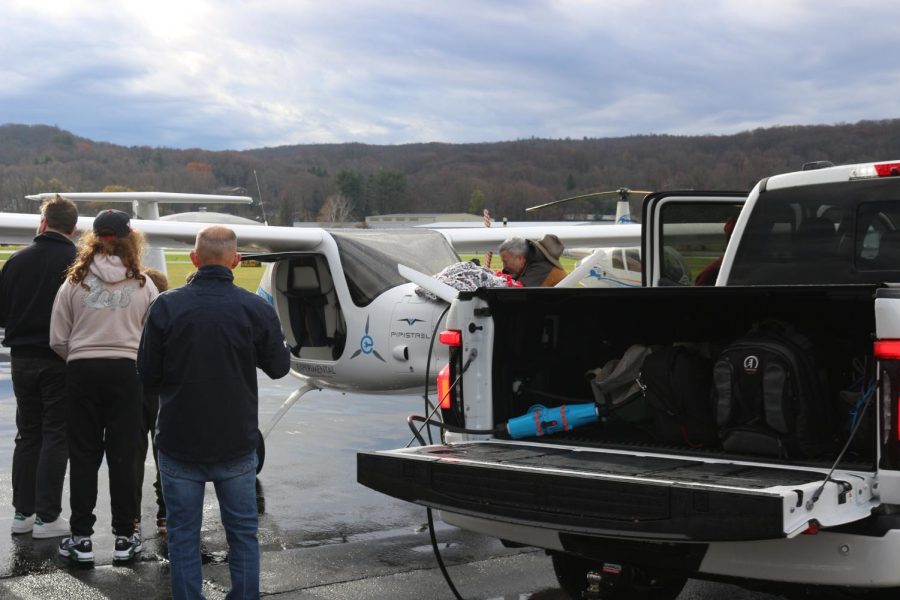 Photo by Jenny Davis
The plane was powered entirely by the Ford F-150 Lightning, an electric pickup truck.

Not only did the crew set a world record last weekend, but they found themselves growing closer as a group, despite some members having met each other for the first time on Saturday. After a few days apart, the group met at a residence hall to make dinner together, unrelated to the trip.

“Everyone still feels very connected because of that experience,” Fiske said. “It’s amazing given such a short time span. Because of that shared experience, we are already seventy percent of the way to becoming great friends.”

Remy Oktay said that he was very pleased with the outcome of the trip and looks forward to traveling back to Hartford next week to return the aircraft, which is currently at Braden Airpark just outside of Easton.

“I found that the only thing that’s guaranteed is that nothing goes according to plan but it does work out in the end,” Remy Oktay said. “I can’t thank everybody who came out enough for making this crazy dream of eleven weeks ago all come together. I’m extremely happy with … how everything worked out in the end and looking forward to both the plane tour starting tomorrow and to the flyover on Saturday.”