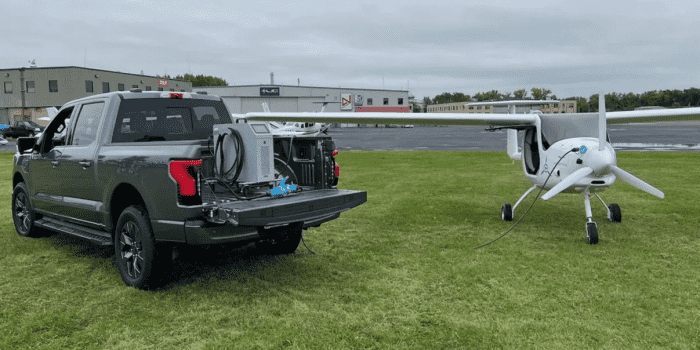 Using Ford F-150 Lightning pickups to charge a Pipistrel Alpha Electro will enable spectators at the Lafayette College-Lehigh football game to see an electric airplane flyover.  Remy Oktay wants to perform at his school’s football game, and needs to fly the craft from Hartford, Connecticut to the game in Easton, Pennsylvania.

Bringing Your Own Charging Stations

Recent attempts to fly reasonably long distances with electric airplanes have shown a few limitations.  Aside from the self-recharging craft like Solar Impulse or the Raymonds’ Solar-Flight Duo, planes with rechargeable batteries cannot go far without needing a compatible charger. 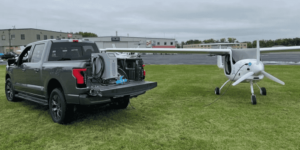 We reported on several of these distance flight, noting the accommodations each made to fly beyond their home fields.

Gabriel DeVault made a California outing into a search for viable charging station.  Friend Bob Mackey flew a Maule along the route, carrying a charger to keep Gabriel’s eGull going.

A Swiss team flew to the North Sea, with chase cars lugging their charging gear along.

Joseph Oldham made it from Fresno, California and back using Beam Global solar-powered charging stations at each stop and claiming the world’s longest off-grid-charged  electric flight record.

Not the Blue Angels, but Electrifying

Electrek reports, “Remy Oktay, a student at Lafayette College, is planning the first electric plane flyover at a sporting event at the Lafayette-Lehigh football game on November 19, 2022.”  Maybe it’s not the Blue Angels, but it should be an exhilarating, first-time event, already gaining wide press coverage a week before the game.

Peter Johnson explains the problem faced by Remy.  “The electric plane is based in Hartford, Connecticut, and needs to get to Easton, Pennsylvania. However, the issue is the EV plane will need to be recharged three times, and there is no charging infrastructure, so Ford F-150 Lightning owners are stepping up to help power the flight.”

Flight distance is around 195 miles, about the same as the trip Joseph Oldham took between Fresno and Sacramento.

As experienced by the Swiss flyers heading over Germany and Oldham traversing the Central Valley, the Pipistrel is good for about an hour’s flight before needing to set down with a legal 30-minute reserve.  That means stopping along the way.  Most stops, though, are not set up to accommodate electric aircraft.

At each stop, Oktay has arranged for F-150 owners to have their Pro Power Onboard equipped trucks in place.  These trucks have demonstrated their ability to keep a house powered through the 2021 Texas blizzards, for instance, and their 9.6 kilowatt Pro Power Onboard provides  four 120V outlets in the front trunk, two in the cab, and four in the bed. The bed also features a 240V outlet, according to Ford.

Although Remy uses his Nissan Leaf to power the battery to 80 percent, he will use the Ford Lightning to charge it fully as a “safety precaution,” using the total 7.2 kW output in the bed.  Remy has successfully charged the plane on two separate Lighnings Pipistrel modified the firmware to make the plane’s slightly higher Amp rating work with that of the truck.

The total trip mileage is around 250 miles or so, so the Ford F-150 Lightning Extended Range model would only need to recharge once, if that.  Instead, the crew gathered two electric trucks, one from a local Ford Lightning owner, and another from Monaco Ford stepped up to help. 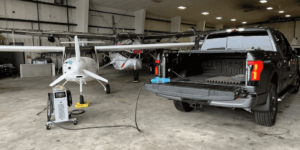 Remy was featured in the Lafayette newsletter last year for his conversion of an old school bus into a solar-powered living space.  Dubbed “the Solar Busman,” he solved the problem of creating a more than adequate “dorm” while enjoying the benefits of free energy.  He apparently inspired his sister to do the same and create her own tiny home bus. 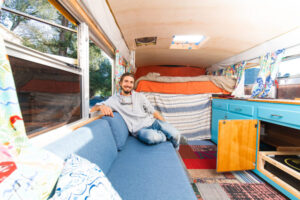 Lafayette’s motto is “Cur Non,” or “Why Not?” Remy seems to exemplify that try anything attitude, and his engineering skills, entrepreneurial attitude, and concern for the environment will serve our planet well.