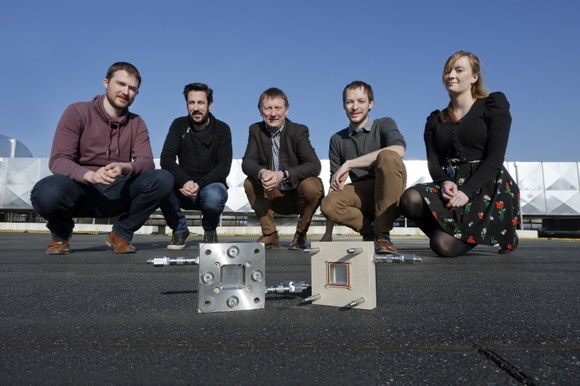 Students at the University of Leuven, the Netherlands, have won the first Energy Award, sponsored by Febeliec – the association of industrial energy consumers, a Belgian trade association. 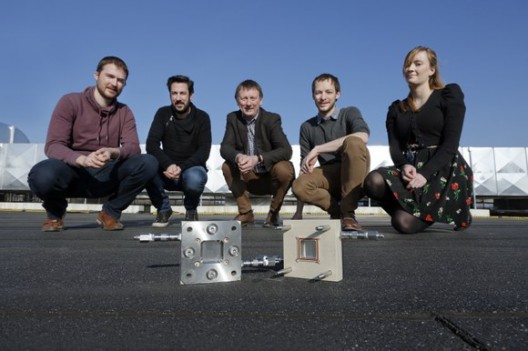 Their miniature solar panel produces hydrogen gas when exposed to sunlight, not unlike “artificial leaves” of other researchers.  The bioscience engineers crafted a small square panel that can be mounted to rooftops, including those of cars, to convert water vapor in the air to H2 that could feed fuel cells in the building or vehicle.  This could also reduce CO2 “on a large scale to convert it into useful substances,” according to the team of young scientists.

Generating electricity and producing hydrogen at the same time is a neat trick, but the roughly foot-square generators could be combined with more conventional solar cells to provide both electricity for immediate use and H2 to be stored for use on demand.  This coexistence concept would help overcome the relatively low output for the current miniature panels – which is expected to improve, of course.

What’s kept hydrogen from becoming a prime mover in mobility?  Johan Martens of the the KU Leuven Centre for Surface Chemistry and Catalysis (and research leader for the project) says, “Hydrogen gas does not occur in nature. It is traditionally derived from fossil fuels, and this process comes with the emission of CO2. Research is being conducted into alternative technologies such as electrolysis: you send an electric current through water, and this creates oxygen and hydrogen gas. In itself, this process is not polluting, but it still requires electricity that is often derived from fossil fuels. The current challenge is to find a truly sustainable production method that can compete economically with fossil fuels.”

The team claims to be the first in the world to produce hydrogen gas using nothing but sunlight and water vapor from the air. “We have already tested our solar cells on the roof, and they work.” In the experimental stage, however, the solar cells make up only a dozen square centimeters.

“The device consists of a reactor with two compartments: light and air enter through one side, and hydrogen gas comes out of the other. Between the two compartments are the paper-thin solar cell, covered with filtering membranes, and catalysts, substances that trigger the production of hydrogen gas. We don’t need to add water, acids, or any other auxiliary substances, and the sunlight provides the energy.”

This all-in-one system uses air as its source of water, and could even work in the desert, where the driest air still contains about five grams of water per cubic meter (about 35 cubic feet).  The device is carbon neutral, with no net use of water.  Any water it captures to make hydrogen is released back into the air from which it was pulled.

Martens thinks that, “We shouldn’t ban carbon emission from our economy.”  He thinks we can collect CO2 from the air and recycle it to obtain new fuel or chemicals.  For instance, “By adding hydrogen gas to CO2 you can, for instance, produce synthetic natural gas,” he believes.

With the little solar squares distributed on houses, all energy could be produced locally.  “Or we could equip the bodywork of cars with our technology to produce hydrogen gas. You could compare it to charging an electric car – except you don’t need a charging point, just sunlight.”

He concludes, “Chemistry is often frowned upon as a polluting industry, but for a challenge such as climate change, it may very well provide the ultimate solution.”

The industry group that provided the energy award prize reviewed several entries before coming up with three finalists.  “It was not an easy task” declares François Cornelis, President of the jury. “We had 3 strong finalists and each project contained some strong elements. It was finally the innovative content of this project that made the difference. It combines new scientific insights in the field of catalysis with a pragmatic method to produce stand-alone hydrogen. The project shortens and simplifies the route to produce a storable energy vector (hydrogen) from solar energy.”