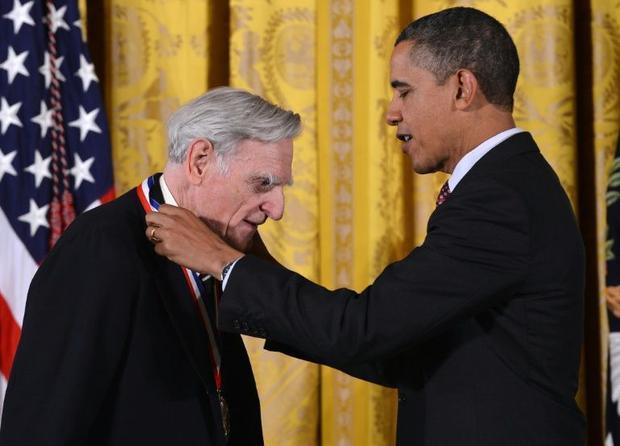 If the man responsible for co-invention of the lithium-ion battery says he has found ways to make it better while eliminating its less desirable characteristics – we will listen.  94-year-old John Goodenough, professor in the Cockrell School of Engineering at The University of Texas at Austin, says as much.  He and researchers including Maria Helena Braga, claim to have created “A low-cost all-solid-state battery that is noncombustible and has a long cycle life (battery life) with a high volumetric energy density and fast rates of charge and discharge.”  Their findings can be found in the journal, Energy & Environmental Science. 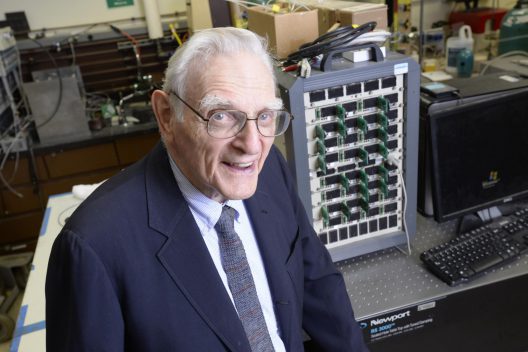 John Goodenough in his Cockrell laboratory, University of Texas at Austin

Non-combustibility is a big sales point for those worried about having their vape pipe vaporize their underwear, or having a flight-diverting event on their jetliner.  Long cycle life will appeal to people seeing the odometer on their EV turn over in the left-most column.  High volumetric energy density will lighten up the car (or airplane) and make it perform better.  High charge and discharge speeds will have a profound effect on EV utility.  The Austin team makes some great claims, even though their battery is still in the laboratory stage

Currently working with commercialization of their technology, the team has created a battery that gains approval from Goodenough.  “Cost, safety, energy density, rates of charge and discharge and cycle life are critical for battery-driven cars to be more widely adopted. We believe our discovery solves many of the problems that are inherent in today’s batteries.”

.The researchers claim to have demonstrated that their new battery cells have at least three times as much energy density as today’s lithium-ion batteries.  Several factors make this possible.   Instead of using liquid electrolytes, the U of T battery has a glass electrolyte.  This allows the use of an alkali-metal anode, without the hazard of growing dendrites (“metal whiskers”) that cause short circuits in liquid electrolyte batteries.

Alkali-metal anodes, which can be lithium, sodium, or potassium, are not possible in conventional batteries because of their tendency to grow dendrites.  Their use in Goodenough and Braga’s solid-state battery increase the energy density of the cathode and allows up to 1,200 cycles (so far) with low cell resistance.

The solid-glass electrolytes, which Braga began developing at the University of Porto in Portugal, have high conductivity at -20 degrees Celsius, making for a solid-state battery cell that can operate under 60 degrees. Celsius. 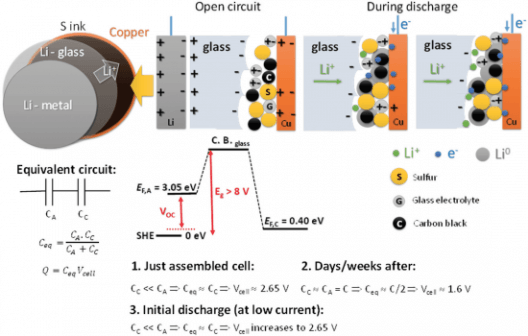 Braga began developing solid-glass electrolytes with colleagues while she was at the University of Porto in Portugal.  Collaborating with Goodenough and researcher Andrew J. Murchison at UT Austin, she used their insights to help patent a new version of the glass electrolytes.

About two years ago, she began collaborating with. Braga said that Goodenough brought an understanding of the composition and properties of the solid-glass electrolytes that resulted in a new version of the electrolytes that is now patented through the UT Austin Office of Technology Commercialization.

Another benefit is the use of low-cost, earth-friendly materials.  Braga notes, “The glass electrolytes allow for the substitution of low-cost sodium for lithium. Sodium is extracted from seawater that is widely available.”

For the Advanced Placement students in the room, the team’s abstract is a condensed, and highly-charged item that is elucidated further in the paper’s text.

The advent of a Li+ or Na+ glass electrolyte with a cation conductivity σi > 10−2 S cm−1 at 25 °C and a motional enthalpy ΔHm = 0.06 eV that is wet by a metallic lithium or sodium anode is used to develop a new strategy for an all-solid-state, rechargeable, metal-plating battery. During discharge, a cell plates the metal of an anode of high-energy Fermi level such as lithium or sodium onto a cathode current collector with a low-energy Fermi level; the voltage of the cell may be determined by a cathode redox center having an energy between the Fermi levels of the anode and that of the cathode current collector. This strategy is demonstrated with a solid electrolyte that not only is wet by the metallic anode, but also has a dielectric constant capable of creating a large electric-double-layer capacitance at the two electrode/electrolyte interfaces. The result is a safe, low-cost, lithium or sodium rechargeable battery of high energy density and long cycle life.