Friend and frequent contributor Colin Rush sent this Economist item about Semprius, a concentrating solar cell maker about to go into production with their highly efficient technology.

It’s big news that a production solar panel is able to convert 42.5 percent of sunlight falling on it into energy, when the world’s record for any solar cell was set last September by the German Fraunhofer Institute for Solar Energy Systems with an experimental multi-junction solar cell that’s 44.7 percent efficient.  The 42.5 percent for Semprius cells drops to about 35 percent when they are surrounded by the normal mounting flanges and connecting lines – still well above most production panels. These may achieve 50 percent with suitable refinement.

Using breakthroughs devised by John Rogers of the University of Illinois, Urbana-Champaign, Semprius is able to mass produce these four cells stacked on top of one another and deploy them in the field.

The Economist explains that, “Solar cells are made of semiconductors, and every type of semiconductor has a property called a band gap that is different from that of other semiconductors. The band gap defines the longest wavelength of light a semiconductor can absorb (it is transparent to longer wavelengths). It also fixes the maximum amount of energy that can be captured from photons of shorter wavelength. The result is that long-wavelength photons are lost and short-wave ones incompletely utilized.”

Dr. Rogers’ layered look uses a different material for each of the four layers, with the bottom of the band gap of the top layer matching the top of the band gap of the next layer down, with that sequence progressing down the stack.  As the Economist points out, “Each layer thus chops off part of the spectrum, converts it efficiently into electrical energy and passes the rest on.” 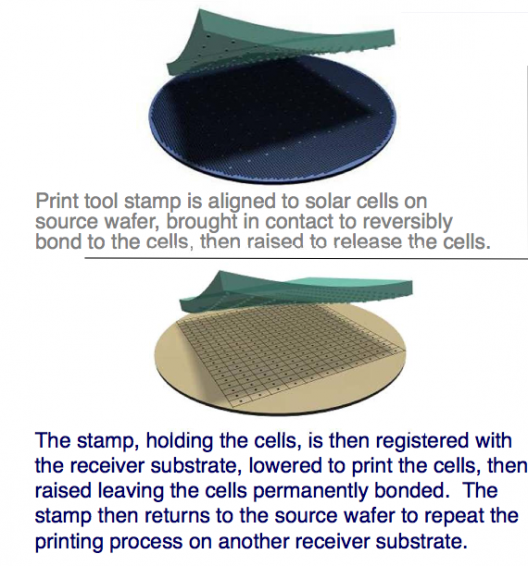 Rogers plays another trick by scattering mere dots of semiconductor materials over the panels, instead of covering the entire surface, as on most silicon-based arrays.  Rogers’ half-millimeter stacks cover only 0.1 percent of the surface.  An area of 125 square meters (1,345 square feet) will have a half-million stacks, each with a “cheap glass lens” mounted over it.  These focus all incident light onto a corresponding semiconductor. 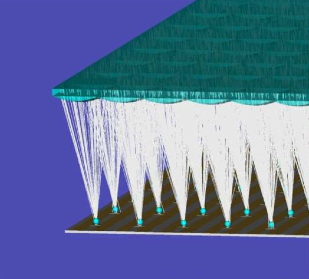 Despite the seeming complexity of making a four-layer solar cell, “The semiconductor stacks themselves are printed onto a cell one layer at a time by a rubber stamp, which picks them up from a crystal wafer of the appropriate material. This wafer has been grown as a series of layers, separated by a substance which can easily be dissolved away. By scoring a checkerboard of cuts through the layers to create squares of the correct size, and then dissolving the filler, layer after layer of semiconductor squares are created, which the rubber stamp peels away and places on the cell. Repeat the process with the other three semiconductors, and package the whole thing with electrical connectors and a transparent protective coat, and—presto!—you have a highly efficient solar panel.”

Being tested at 14 sites around the world, the final price for mass-produced quantities is not yet clear, but Siemens, a Semprius investor, thinks they could compete favorably against coal-fired generators.  As the article notes, when significant advances are made in “banking” that energy for overnight and long-term use, the technology will be finally a viable competitor to fossil fuels.

The 99.9 percent of the solar panels not covered by stacks appear black and can be filled in with artwork, which could be an aesthetic boon to designers, and make normally not-so-pretty panels a desirable addition to architecture. 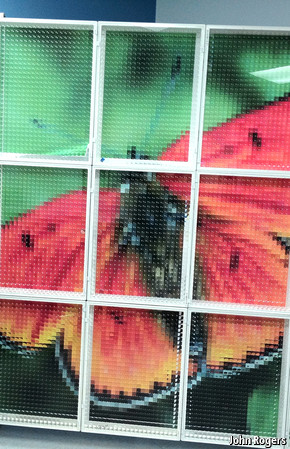 99.9 percent of the solar panel’s area can be devoted to artwork. Photo by John Rogers

Considering the multiple layers and concentrating solar lenses, can these types of arrays find happiness on mobile applications such as automobiles or even aircraft?  The answer would appear to be no for now, based on the use of Semprius stacks for charging the Nuna 7 solar racer from Delft Technical University in last year’s World Solar Challenge, but only in a limited way.

Business Wire examined Semprius’ contribution to the Nuna’s success.  “Earlier this year, the Nuon Solar Team approached Semprius hoping to leverage Semprius’ record module efficiency and compact module design to reclaim the title in 2013. A key challenge, however, was to reduce module weight as much as possible to meet the stringent requirements of the race that limit each team to a total budget of only 160 kilograms. With input from the Team, Semprius modified their standard commercial modules to reduce their weight by sixty percent. Changes included substituting Semprius’ standard front cover glass with a thinner, lightweight glass sheet and replacing Semprius’ steel module enclosures with carbon fiber.”

Despite these weight reductions, “Because Semprius modules must be pointed directly at the sun to generate electricity, the modules cannot be used while the car is in motion. During the race, however, there are mandatory 30 minute breaks every 300 kilometers. During these breaks, the Semprius modules will be deployed on manual trackers to capture extra energy for the Nuna7. Jorrit Vervoordeldonk, Technical Manager of the Nuon Solar Team, calculates that by using Semprius’ modules, it should be possible to decrease the Team’s overall racing time by one hour – perhaps providing the margin of victory for the Team.”

At about 2:10 into the video, the team leaders give credit to the specially-crafted Semprius solar concentrators for their victory.

Perhaps there will be a further breakthrough that allows concentration of sunlight coming from any angle.  This is almost necessary anyway to allow electric aircraft to get the optimum benefits of the free energy streaming our way.