The program continues the drive and immense logistical planning evidenced by Solar Impulse 1’s across-America flight last year.  “What better way to demonstrate the importance of the pioneering, innovatory spirit than by achieving ‘impossible’ things with renewable energy and highlighting new solutions for environmental problems?”

This attitude will be necessary to overcome the challenges of five-day, cross-ocean flights each pilot will face, and to meet the meteorological conditions following the equator much of the way.

The bigger, heavier SI2 will cross deserts, the Great Wall of China, and repeat its journey across America on its five-month circumnavigation of the globe.  Beginning in March, 2015 from Abu Dhabi, Solar Impulse will make stops in Asia, the United States, southern Europe and North Africa before returning to the host city in July, 2015. 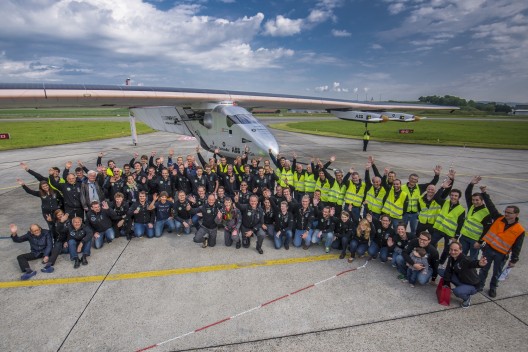 Solar Impulse 2 will require a great ground game, too, with a team to match

As with Solar Impulse 1’s flight to Morocco in June 2012, the move to depart from and arrive in Abu Dhabi has symbolic import.

“Flying to Morocco’s Ouarzazate region is filled with symbolism as it is both Solar Impulse’s and the Moroccan Agency for Solar Energy’s (MASEN’s) common message: to invest in innovative projects today for job creation and sustainable growth tomorrow.”

Abu Dhabi and Masdar, that country’s renewable energy company, will host Solar Impulse as it prepares for its flight.  The big plane will be delivered by cargo plane late in the year and begin test flights and training in January.  It will also be showcased during the World Future Energy Summit as part of the Abu Dhabi Sustainability Week, which is hosted by Masdar between January 17 and 22, 2015.

The Solar Impulse blog reports, “This well-matched partnership will show Abu Dhabi to be a center of expertise when it comes to renewable energy and at the same time Solar Impulse will demonstrate the far-reaching applications of clean energy during the first solar-powered flight around the world,” declared Bertrand Piccard. André Borschberg continued: “We have chosen this location as being the best and most suitable departure point for the round-the-world tour, due to its climate, infrastructure and commitment to clean technologies.” 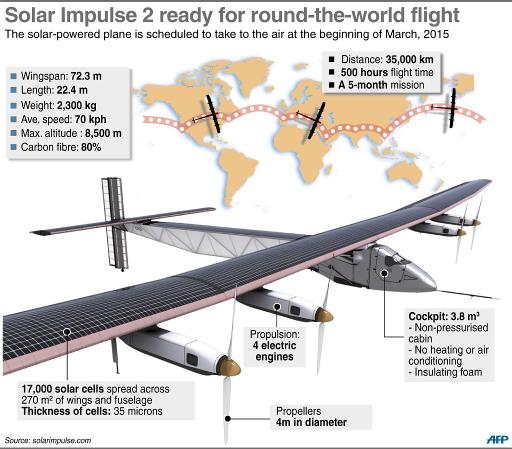 Solar Impulse lists the following as a sketch of their coming flight:

This massive support team seems appropriate for the massive airplane, with a wingspan larger than a Boeing 747 Intercontinental.  The journey, at ultralight speeds, will be a test of patience and technology, and one which we will follow avidly.