Irena Raymond shared the following about her and huband Eric’s flight across the Alps from northern Italy to Switzerland and return – a four-day tour of the mountainous country, and validation of the Sunseeker Duo’s performance. 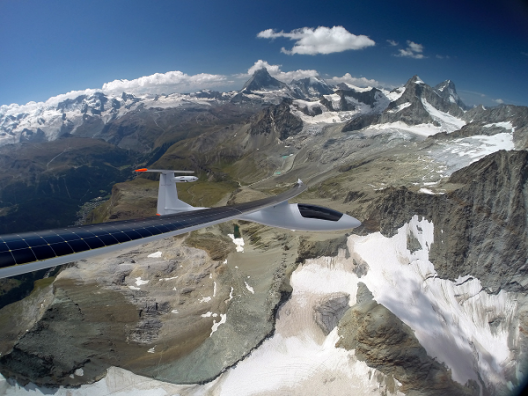 Coming and going, the Raymonds topped the Matterhorn, its peak shrouded above

The latest of a series of accomplishments, the trip’s mission was to “stop and show the airplane at different airports,” according to Irena. Remember that Eric crossed the United States on solar power in Sunseeker I in 1990, 23 years before Solar Impulse managed the feat. Eric crossed the Alps on his way from Friedrichshafen, Germany to the World Air Games in 2009, guiding Sunseeker II over sometimes cloud-shadowed peaks. Now he and Irena have made a two-person Alps crossing and tour of the country in a practical solar-powered airplane. By comparison, Solar Impulse, wonderful as it is, does not qualify as “practical” aerial transport, being pursued around the world by a 60-member crew. Eric and Irena, usually the only pilots and crew of the Duo, are showing a hoped-for future that will allow all of us to fly in a fuel-free way.

Your editor assumes the couple started from their home field in Verghora and, as they describe, headed to Torino Aeritalia airport on August 2, flying in, “smooth air up high so the crew was able to cruise level with a slight climb on the solar panels. The distance flown due to restrictions of the airspace was 171 [kilometers].” (About double the straight-line distance.)

The next day was more difficult and longer, with the intrepid couple facing low clouds and a steep climb from the foothills of the Italian Alps, struggling with downdrafts on the Italian side of the Matterhorn, and confronting what Irena described as “an impassible wall of ice.”

Eric, founder of Solar Flight and designer of the Sunseeker Duo, explained, “We needed to climb several thousand feet more, just to slip into Zermatt, but the batteries were low from all the motoring. We flew back south and soared in difficult conditions until the batteries were fully charged. We were looking at the wall of ice again from below, but I promised Irena another world just on the other side when we started the motor again, less than 10 miles from Zermatt. Using less than half the battery we crested the lowest point, crossing a few hundred feet over people skiing.” 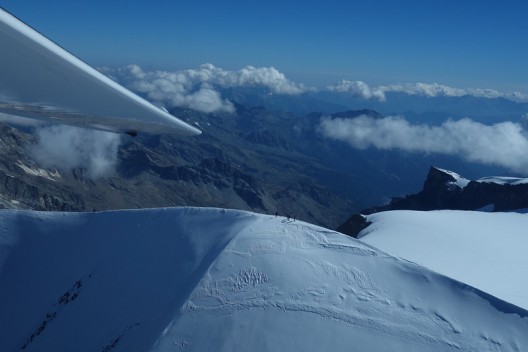 While the skiers wonder how that airplane got there, we wonder the same about the skiers

Since their goal, Munster-Geschinen airfield, was now easily attainable, “Eric and Irena Raymond detoured to the Aletsch Glacier and high mountains behind it – the top of Switzerland, the Jungfrau, Eiger and Mönch.” At 4,090 meters (over 13,000 feet) they could have continued to Interlaken, Bern, Lucerne or Zürich, but kept to their original goal of landing in Münster. They may follow the route north on their next Swiss flight. They had traveled 384 kilometers (238 miles) and charged the Duo’s batteries after landing. 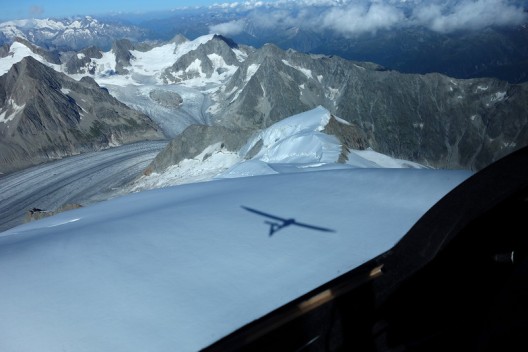 Chasing its shadow over the high peaks

Eric’s mother was Swiss, and left him with “precious memories of the mountain hikes they did together.” On August 5th, Irena got to hike to the top of the Eggishorn with members of the Swiss ground crew, while Eric took his hang-gliding friend Stefan over the ice floes. Irena used a long telephoto lens to take magnificent photos of the Duo skimming over the glaciers.

Irena’s daughter Janja had a full day, accompanying her mom to the Eggishorn as part of the photo crew in the morning and getting a flight in the late afternoon around the Jungfrau, Eiger and Mönch, as well as the Rhône Glacier. 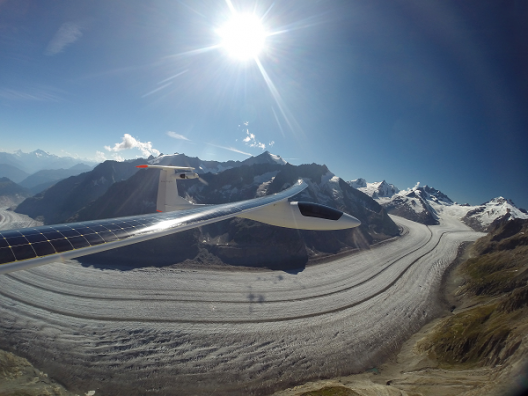 Brilliant alpine sun, ancient glacier, the future of flight all in one scene

The Friday August 7th flight back to their home based was easier than the struggle up the Matterhorn on the trip into Switzerland, with perfect weather that made topping the cloud-cap peak for the spectacular view a photographer’s dream. Eric explained one difficulty. ”The maximum altitude we climbed was 4,545 meters (14,900 feet). We could easily go much higher, unfortunately we do not have a dual oxygen system yet.” This four-hour, 230 kilometer (143 mile) flight took them from the crystal-clear air of the Alps to the hot cloudiness of the Po Valley. Not many can boast of having spent five days flying over two countries and not having used the gasoline credit card. 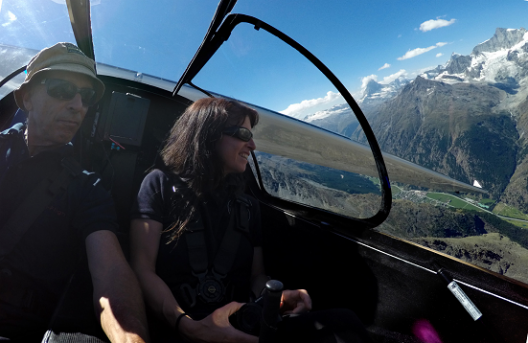 A skilled couple enjoying the fruits of their labors

You can see more stunning photos of the flight here . Did we mention that Eric and Irena are professional photographers?