According to scientific history, or perhaps legend, Archimedes had his Eureka moment when settling into his bathtub and seeing the water rise around him.  He came up with his idea that a body’s mass displaced an equal amount of water, something that’s proved to be useful to know.

Zachary Favors, a graduate student at the University of California at Riverside, had a similar moment of discovery when leaving the water after surfing near the beaches of San Clemente.  According to the UCR press release, “he picked up some sand, took a close look at it and saw it was made up primarily of quartz, or silicon dioxide.”  This led him to research locations in the United States where sand with high proportions of quartz existed.  He found that the Cedar Creek Reservoir, east of Dallas, had sand with the qualities for which he was searching. Not only that, it was close to his boyhood home. 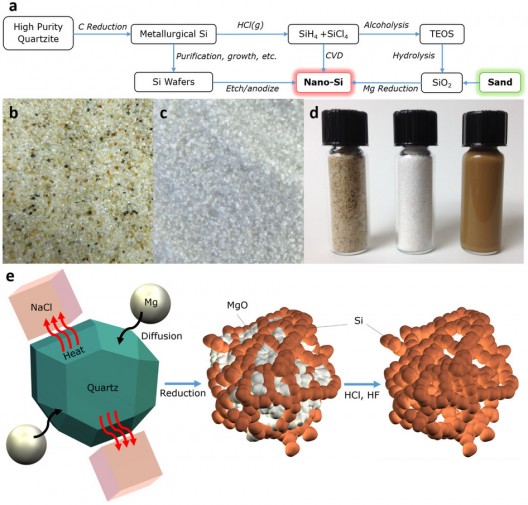 What would lead him to want a particular type of sand?  Favors works with Cengiz and Mihri Ozkan, both engineering professors at UC Riverside and themselves working on improving lithium battery performance with silicon in place of graphite in anodes, the negative side of the battery.  These researchers are focused on using silicon at the nano scale, because it offers superior performance to  graphite, but degrades quickly and is hard to produce in large quantities. 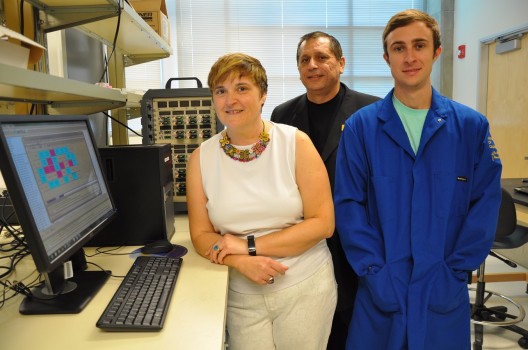 From left, Mihrimah Ozkan, Cenzig Ozkan and Zachary Favors in the Ozkan’s laboratory

Favors saw a solution to this in the right sand, which he brought to the laboratory at UCR.  After milling it to the nanometer scale, he purified the sand in a series of steps that changed its color from brown to bright white, “similar in color and texture to powdered sugar.”

He then ground salt and magnesium, “both very common elements found dissolved in sea water,” into the purified quartz.  Heating the resulting powder caused the salt to act as a heat absorber, the magnesium removed the oxygen from the quartz, and Favors ended up with pure silicon.

According to UCR, “The Ozkan team was pleased with how the process went. And they also encountered an added positive surprise. The pure nano-silicon formed in a very porous 3-D silicon sponge like consistency. That porosity has proved to be the key to improving the performance of the batteries built with the nano-silicon.”

That performance includes three times the lifespan and more than three times the energy density of “traditional graphite anodes.”  The team is working to expand the size of their improved batteries from the current test coin size to pouch sizes common in portable electronic devices.

To see their findings, read “Scalable Synthesis of Nano-Silicon from Beach Sand for Long Cycle Life Li-ion Batteries,” in the journal Nature Scientific Reports. Besides Favors and the Ozkan’s, authors were: Wei Wang, Hamed Hosseini Bay, Zafer Mutlu, Kazi Ahmed and Chueh Liu. All five are graduate students working in the Ozkan’s labs.

The abstract for the paper reads:

“Herein, porous nano-silicon has been synthesized via a highly scalable heat scavenger-assisted magnesiothermic reduction of beach sand. This environmentally benign, highly abundant, and low cost SiO2 source allows for production of nano-silicon at the industry level with excellent electrochemical performance as an anode material for Li-ion batteries. The addition of NaCl, as an effective heat scavenger for the highly exothermic magnesium reduction process, promotes the formation of an interconnected 3D network of nano-silicon with a thickness of 8-10 nm. Carbon coated nano-silicon electrodes achieve remarkable electrochemical performance with a capacity of 1024 mAhg−1 at 2 Ag−1 after 1000 cycles.”