Glaser-Dirks Flugzeugbau, the German sailplane manufacturer, has introduced the DG-1001te, a two-seat, electric turbo craft that can sustain flight and even show a modest rate of climb, but is not capable of self-launching.

The “turbo” designation is common on European craft that rely on a pop-up motor to maintain flight in unfavorable soaring conditions.  Following an aero-tow or winch launch, the sustainer engine is used to allow “get-home mode” operation, or to maintain altitude while the pilot searches for areas of better lift.

Until recently, single- and two-cylinder Solo two-stroke engines served on many applications.  Electric motors are beginning to find favor, though, because of their ease of starting and the fact that their light weight and high power output counterbalance the added weight of batteries.  The battery pack can be kept small because of the small power output required to keep sailplanes airborne – under five horsepower at best gliding speed for even large birds.

Luka and Matija Znidarsic, father and son team from Slovenia, led the charge for electric sustainers with a nose-mounted propeller drive and controller of their own design which they installed and flew on an LAK-17a.  Later, they enlarged the motor and installed it in the smaller Silent 2 to achieve self-launching capabilities.  Such a system requires a small enough propeller to allow folding it along the nose of the aircraft and a high enough landing gear clearance to avoid striking the unfolded propeller on the ground.

For Motorseglers that cannot accommodate a propeller in their nose (it helps if the plane has a nicely symmetrical shape to allow incorporating a prop spinner seamlessly), the “traditional” folding mast and propeller are most common.  Glaser Dirks has opted for this on the DG-1001te, the electric sustainer version of their flagship soarer.

The firm makes a Solo-powered self-launching 1001M, a small Solo-engined 1001T, and an electric-powered 1001te.  The latter required “a comprehensive market analysis” in an attempt to find a practical motor.  After several vendors were unable to meet the production or time-line requirements for DG, the designers turned to Enstroj, the Slovenian company usually associated with Pipistrel. 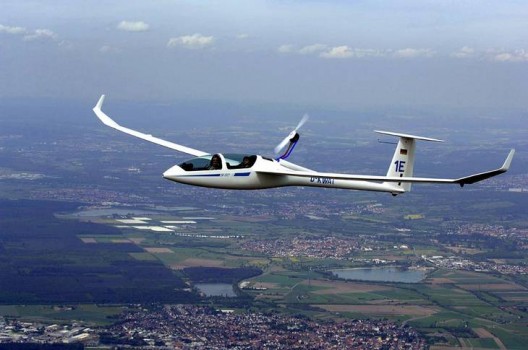 The standard Emrax 222 can deliver a peak 30 kilowatts at 1,700 rpm, but DG elected to modify the windings to increase the output speed to 2,650 rpm.  72 Kokam SLPB7821621H cells are used for energy storage.  To mitigate fire risks, designers took several measures.  First, they developed a battery management system to protect individual cells from harmful over- and under-voltages.  They inserted the cells on mounting plates of high-strength aramid flame-retardant resin.  They used aluminum covers for the battery packs to dissipate heat.  They also built two battery compartments, the largest with 48 cells mounted in the motor bay and the smaller with 24 cells in the former fuel tank area.  Batteries in both areas are arranged in 12-cell modules, each with monitoring electronics.

Pitronik supplied the motor controller, adapted from their unit normally used with the Emrax 222.  An Eltek Valere battery charger replenishes energy between flights, and everything is connected through a CANBus interface. 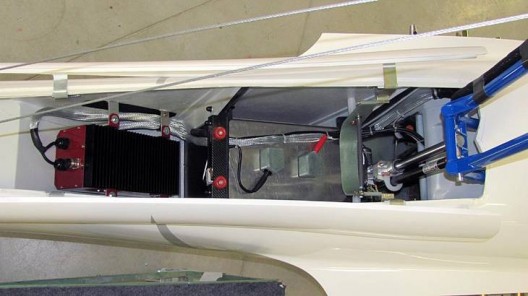 According to DG, test runs show the electric sustainer to produce about 15 percent higher output than the internal-combustion version, with a higher rate of climb for pulling out of down air.  With two motor runs of about 10 minutes possible (20 minutes being the demonstrated run time) on the moderate battery packs, the plane should be able to climb far enough to gain 100 kilometers (62 miles) in gliding distance.

Videos of the power system being tested show a 10-second extension to start time, with no extra seconds required for pressing a primer bulb, attempting a restart, or other potentially disastrous time wasters associated with two-stroke mid-air restarts.