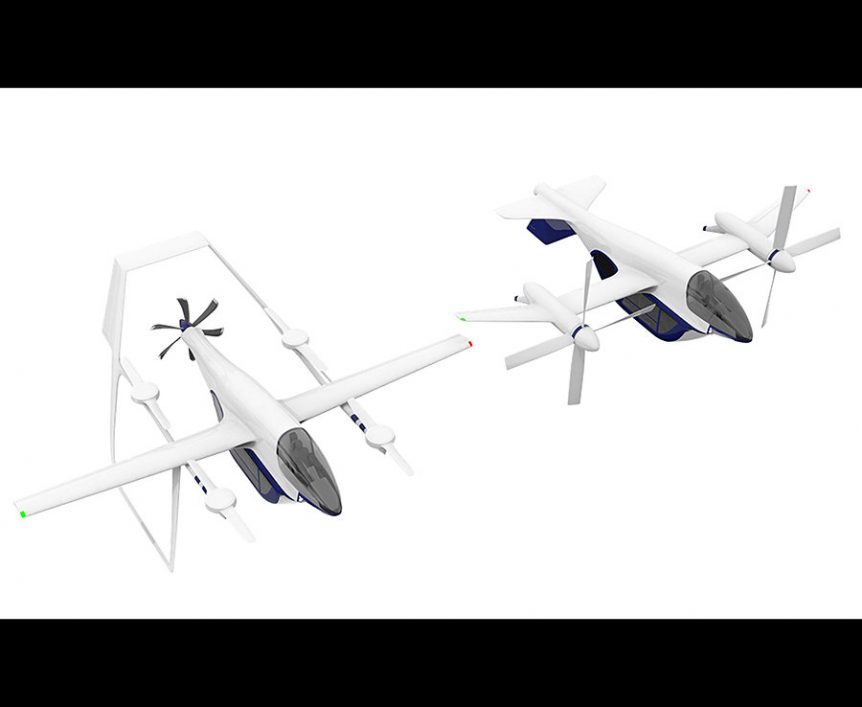 Terrafugia, unabashedly calling its vehicles “flying cars” in many of its public pronouncements, has floated a concept that is a serious departure from their two previous designs.  The TF-2 will be the equivalent of a shuttle bus, but with an aerial means of making a longer haul than mere in-town hops.

Started by MIT graduates, many of them members of the rocketry club, Terrafugia has managed to garner an enormous number of media hits.  It even became a possible Christmas gift in the 2010 Hammacher Schlemmer Christmas catalog.

Hammacher Schlemmer offered early version of Transition in its 2010 catalog

It flew its Transition before the crowds at AirVenture in 2013, and was able to obtain certification as a Light Sport Aircraft since then, but with a slightly higher than original LSA weight allowance.  That seems to be moot at this point, since the FAA is going to allow LSA pilots to fly aircraft up to 3,600 pounds.

Popular Science reported in 2014, “To meet highway-safety requirements, the Transition needs to be heavier than the 1,320-pound limit the FAA has set for LSAs, which lead Terrafugia to apply for a waiver from the limit in 2014. The stall speed of the flying car is also inevitably going to be above the 45-kt. maximum for LSAs, but certain automotive safety features like a safety cage and crumple zone could be beneficial in general aviation, leading the FAA to waive the weight and stall-speed limits for the Transition. It’s a big win for the car, which still faces a host of challenges before it can really come to market.”  Because it’s a flying car, the craft has airbags, something not widely adopted in airplanes.

Features in the promised 2019 production models will include a hybrid-electric motor combining an internal combustion engine and a LiFePO4 (lithium iron phosphate) battery.  The throttle will include a boost feature “for a brief burst of extra power while flying.”  The interior will seat two in front of an “intuitive user interface experience.”  Three rearview cameras in drive mode will add to driving safety. Dynon will provide Electrical Flight Information Sytems (EFIS) and BRS will supply a full frame parachute system.

With its purchase by China’s Geely Holding Group (also owner of Volvo and Lotus car groups), Terrafugia has since introduced a concept vehicle, the T-FX.  It seems to be the combination of SUV and flying taxi, able to be kept in the garage and lofting its passengers skyward with a few touches of buttons and probably autonomous controls and navigation.  It’s the best of the Jetsons and early Popular Mechanics covers. 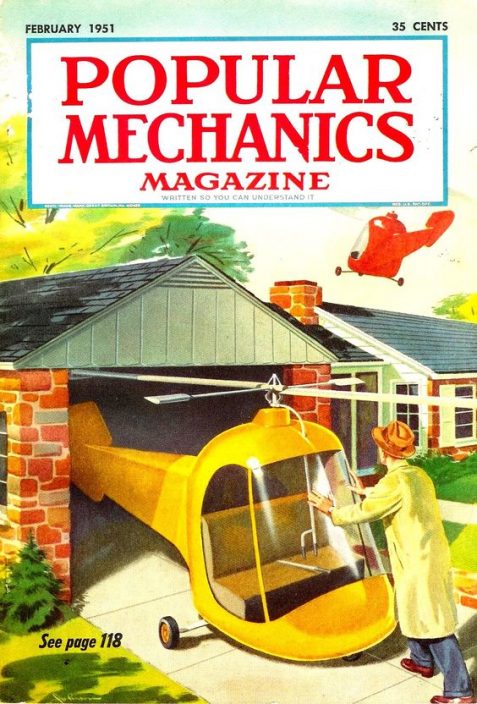 Popular Mechanics promoted home-bound flight vehicles throughout its history.  You can visit the actual machine in the Hiller Aviation Museum in San Carlos, California

A hybrid, the TF-X would fly with a 300-horsepower (220 kilowatt) engine and two electric motors for a combined output of a megawatt (1,341 horsepower).  These are projected to give a top speed of 200 miles per hour, a cruise speed of 160 mph, and enable a 500-mile range.  The highly automated control system would allow a new pilot to learn to fly the TF-X in about five hours, according to the maker.

The T-FX has caused some Tweets, mainly about where it is in its stage of development.  Donald Bensen asked: @Terrafugia when will the TF-X appear at either an auto show or an air show? Would love to check it out.

He received this response: The TF-X is still in concept at this point but check out our newest item at http://terrafugia-tf2.com  ! #ExcitingThingsAreHappening! #FlyingHigh

That Tweet seems to be a bit of a diversion, but it points to another Terrafugia concept, the TF-2.

There seem to be several renditions of the TF-2, each carrying a similar “LPP” cargo pod.  One is a tilt rotor machine, with two large Osprey-like fans and a single large propeller in the tail to propel the machine forward.  The TF-2 shown in the first video has the two large tilt rotors, for instance, but at least two configurations. 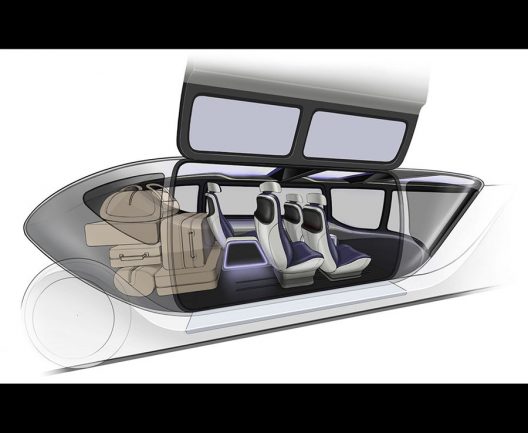 LPP pod can carry either passengers or cargo

The current video shows a multi-rotor TF-2 with four vertical lift rotors and one rearward-facing propulsors (the vocabulary is still under development).  The number and arrangement vary in different renderings, making it a guessing game until the prototype is unveiled.

With a large infusion of cash from Geely, Terrafugia seems to be taking a new course, possibly a more realistic one than their original vision.