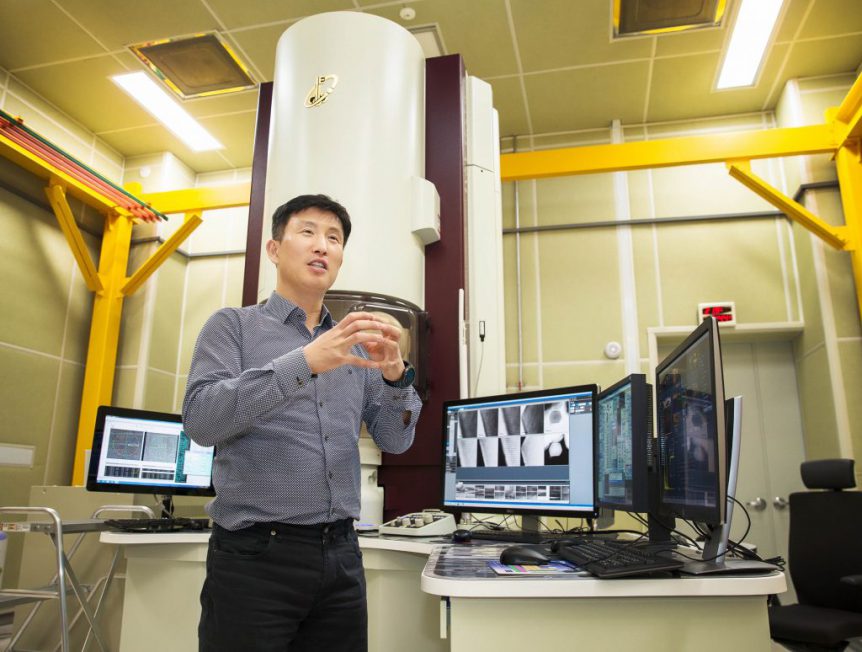 Jaephil Cho has a surprise for us – an aluminum-air battery that is potentially (no pun intended) more energetic than gasoline.  Director of the Research Center for Innovative Battery Technologies and Professor in the School of Energy and Chemical Engineering, at Ulsan National Institute of Science and Technology (UNIST), Cho and his students have released over 350 papers, including one titled, “Seed-mediated atomic-scale reconstruction of silver manganate nanoplates for oxygen reduction towards high-energy aluminum-air flow batteries.”

While such titles might not get him on the NY Times best-seller list, Cho is widely respected, UNIST reporting he has been named to the 2017 Highly Cited Researchers List in materials science, a second such honor for him.

Professor Cho’s paper (in full) describes the aluminum flow battery he and his team developed.  According to the UNIST News Center, “…Compared to the existing lithium-ion batteries (LIBs), the new battery outperforms the others in terms of higher energy density, lower cost, longer cycle life, and higher safety.  One drawback – the battery is a primary storage device, meaning it cannot be recharged.  It can be readily swapped out of its host vehicle, though.

Even better, it’s more powerful than gasoline – on a pound-for-pound (or kilogram-for-kilogram) basis.  Cho explains, “Gasoline has an energy density of 1,700 [Watt-hours per kilogram], while an aluminum-air flow battery exhibits a much higher energy densities of 2,500 Wh/kg with its replaceable electrolyte and aluminum.   This means, with 1[kilogram] of aluminum, we can build a battery that enables an electric car to run up to 700 [kilometer] (434 miles).” 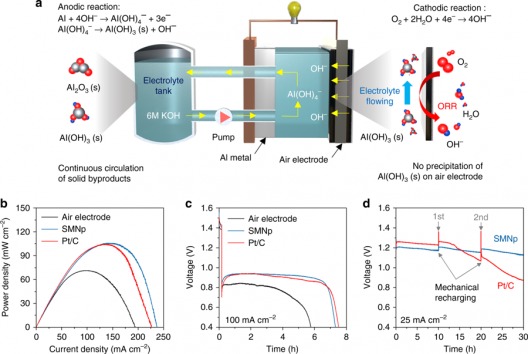 An Israeli firm, Phinergy, promotes its aluminum-air battery as delivering eight kilowatt-hours per kilogram, capable of driving a small car 1,000 kilometers (620 miles) and being recharged in three minutes.  Comparisons are difficult since Phinergy does not have hard data on its web site.  Earlier reports show that Eviation showed interest in powering its aircraft with Phinergy cells, though.  “EViation says that the battery is ‘coupled with a high power rechargeable battery buffer, and managed by a clever mission specific power analytic algorithm.  This unique technology provides high energy density ‘at a cost that beats gas, and with zero emissions.’”  Little new has been heard from the battery company until this last February, when it formed a joint venture with China’s Yunnan Aluminum.  The combined company, Yunnan Phinergy Chuang Neng Metal Air Battery Co Ltd, will have a registered capital of 813.82 million yuan ($128.97 million).

The Israelis were probably drawn to aluminum for the same reasons Cho’s team was – such batteries are potentially “lighter, cheaper, and have a greater capacity than a traditional LIB (lithium-ion battery).”

Aluminum batteries using “traditional” electrolytes faced problems with high anode costs and difficulties removing byproducts when they were discharged.  Professor Cho and his team developed a flow-based aluminum-air battery to continuously circulate the electrolytes, solving these issues.  The battery and its electrolytes are also fire and explosion proof. 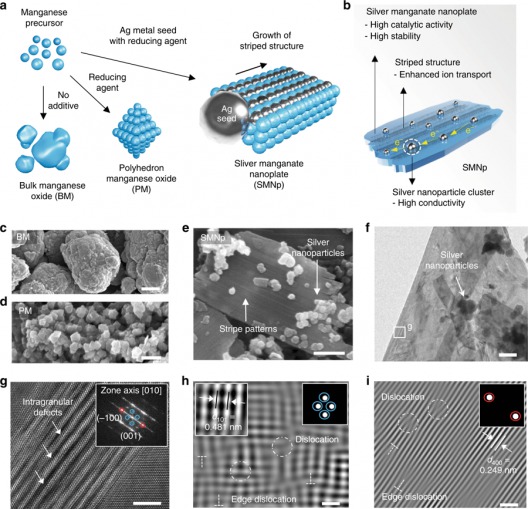 Formation of the stripe pattern and dislocation. a, b Schematic of the synthesis process (a) of the bulk manganese oxides (BM), polyhedron manganese oxide (PM), and silver manganate nanoplate (SMNp), and the summary of the catalytic effects (b) of the SMNp. c–e Scanning electronic microscopy (SEM) images of the BM (c), PM (d), and SMNp (e) showing plate-like structures with silver nanoparticles. f, g High-resolution transmission electron microscopy (HR-TEM) images of the SMNp (f) and high-magnified image (g) of the box in f, which shows zigzag atomic arrangements with intragranular cracking. Fast Fourier transform (FFT) image of g presents the lattice planes of (–100) and (001) along the [010] zone, indicating the orthorhombic structure of Ag2MnO4. h, I Inverse FFT images of applied masks at the blue circle (h) and red circle (i) in g, showing a wide range of dislocations with defects. The dislocations are shown by circles and edge dislocations are represented by a T-shaped symbol. The upper right insets in h and I indicate the applied masks and the lattice spacing of the (101) plane is denoted as the left inset in h. Scale bars, 5 μm (c), 500 nm (d), 200 nm (e), 100 nm (f), 4 nm (g), and 1 nm (h, i).  Illustration and caption: UNIST

According to UNIST, this increased the discharge capacity of aluminum-air flow battery 17 times compared to conventional aluminum air batteries.  “…The capacity of [the] newly developed silver-manganese oxide-based catalysts was comparable to that of the conventional platinum catalysts (Pt/C).  As silver is 50 times less expensive than platinum, it is also competitive in terms of the price.” 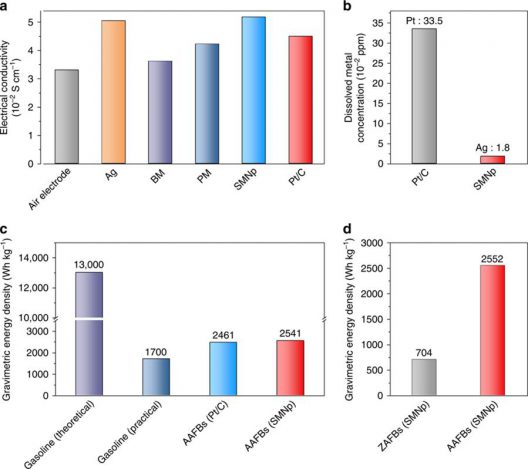 Jaechan Ryu, first author of the study says, “This innovative strategy prevented the precipitation of solid by-product in the cell and dissolution of a precious metal in air electrode.  We believe that our AAFB (aluminum air flow battery) system has the potential for a cost-effective and safe next-generation energy conversion system.”

One aspect of the study deserves more attention, in your editor’s opinion.  The definition of energy density for “gasoline (practical)” could use a layman’s explanation.  We know that batteries traditionally have had lower energy densities than gasoline or other fossil fuels, but made up for that by the fact that internal combustion engines use only a quarter to a third of that energy in useful work, the rest consumed by heat exchanges and mechanical inefficiencies.  Cho’s work here puts his battery at a level with or superior to gasoline in practical terms.

For a discussion of the practical limits and applications of battery energy densities, see this discussion from GreenTransportation.info.  Your editor found their motto, “Why and how to joyfully move our butts around town, without mucking the place up,” to his liking.