The Air Force Thunderbirds F-16 demonstration team will become the first Department of Defense military air show group to fly on bio-fuel when two members of the team have their craft powered by a 50-50 mix of standard JP-8 and camelina-derived bio-fuel.  The flights were scheduled to place at Andrews Air Force Base for the Joint Services Open House on May 20 and 21. 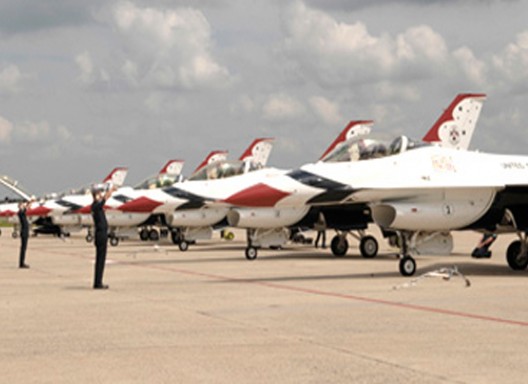 The team follows two other uses of camelina in military jets: the Earth Day 2010 flight of an FA-18s (the Green Hornet) and this year’s supersonic flight on the fuel blend by an F-22.  These demonstrations exhibit the interest DOD planners are taking in finding alternative fuels.

The Air Force press release makes the overall effects of such changes clear.  “The team will fly with Camelina-based hydrotreated renewable jet fuel as part of the nation’s overall strategy to reduce reliance on foreign energy and establish greater energy security through conservation and use of ‘home grown’ alternative energy sources, said Terry Yonkers, the assistant secretary of the Air Force for installations, environment and logistics.

The economic impact to the Air Force resulting from these types of energy efficiency initiatives could be savings in the ‘hundreds of millions of dollars on an annual basis,’ Mr. Yonkers said.”

According to Yonkers, the Air Force has “tested and certified biofuel as a 50-percent blend with regular jet fuel in the A-10 Thunderbolt II, the F-15 Eagle, the C-17 Globemaster III, and the F-22 Raptor,” with fleetwide certification “on track” for completion in 2013.

“‘The mission is to represent the pride, precision and professionalism of the nearly 700,000 Airmen of our Air Force … at the same time we are showing the Air Force’s dedication to alternative fuel, so it’s a great opportunity,’ said Lt. Col. Case Cunningham, the lead pilot and Thunderbirds commander.”