Australia supplies 3,000 kilometers (1,860 miles) of smooth road and abundant sunshine every year for the Bridgestone World Solar Challenge that bisects the country north to south.  Growing in numbers annually, this year’s five-day race drew 47 teams from 25 countries, with two teams from the Netherlands,  one from the University of Michigan in the United States and one from Tokai University in Japan trading the lead almost daily and battling it out for the first four places in the Challenger Class with daily consistency. 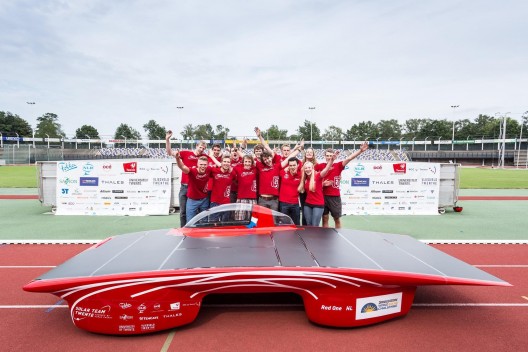 University of Delft students had their second win in two years, while rivals from the University of Twente (the Netherlands) achieved a very strong second place overall.  The University of Michigan’s team was a consistent third-place contender, only to be bested at the end by Tokai’s final sprint.  Even at 3,000 kilometers, Nuon and Solar Team Twente were just over two and a half minutes apart.  Delft’s car traveled the 3002 kilometers in 37 hours, 56 minutes and 12 seconds, an average of 91.75 kilometers per hour (56.885 mph).

Teams included a goodly contingent of people beside the drivers.  Rules require at least the following:

Shipping a car and up to 17 support personnel to the Land of Oz is a challenge in itself.  Meeting the stringent rules is another.  Cars race in at least three classes – Challenger, Cruiser, and Adventure Class, with the possibility of an Evolutions Class involving entries from previous races if the race organizer agrees to allow their entry.   No one participated in the Evolution class this year.

You can see examples of each class in the video.

Most wonderfully, only two Challenger teams did not finish this year, and all those who did make it to Adelaide posted creditable times, with 20 making the entire run on solar power and nine being towed varying distances.  Several days saw speeds over 100 kilometers per hour, or 62 mph. This level of performance from creations by student teams shows the learning curve is being shared to everyone’s benefit.

Cruiser class cars vary more in configuration, from twin-hulled catamaran types to fairly conventional sports coupes, all stressing greater practicality, cabin space and comfort than the outright competition-oriented Challenger Class machines.  Five of the 12 entrants in this class made it all the way on solar energy.  Entrants ranged from Poland to Iran to Indonesia to home country Australian favorites.

Stella Lux from the Eindhoven University of Technology is an outstanding example of what can be accomplished following Paul MacCready’s dictum of doing more with less.   It seats four and generates energy from 5.8 square meters on its aerodynamically-curved roof.  That charges a battery that can hold 15 kilowatt hours of electricity.   Stella Lux used only 64 kWh of electricity for the 3002 kilometers.  The Delft team claims this is an “energy positive” car, using less electricity than it accumulates along the way.  That energy could be plugged in at home at night to power off-grid homes – a boon for Outback lodgings.  Note that this is possible by starting with a “full” battery, running at moderate speeds, and having an Outback level of sunshine to draw from for a long day.  Otherwise, the 390 kilogram (858 pound) car is a light, highly-efficient electric vehicle.

Consider that Stella has two pods, not unlike the 2011 Green Flight Challenge winner, the Pipistrel G4, and that it carries four with great efficiency.  We might learn a lot from solar-powered cars traversing the Mad Max-like landscape.