This is not pulp fiction, but pulp fact, trees being converted into squishy new nerf-like batteries.

Researchers at Sweden’s KTH Royal Institute of Technology and Stanford University have made elastic, high-capacity batteries from wood pulp.  The foam-like battery material can withstand shock and stress, according to the schools.  Max Hamedi, a researcher at KTH and Harvard University, says, “It is possible to make incredible materials from trees and cellulose.” 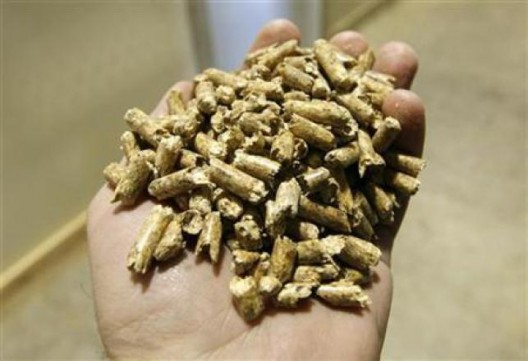 The wood-based aerogel material can be used for three-dimensional structures, important for overcoming certain restrictions imposed by two-dimensional approaches.  Hamedi explains, “There are limits to how thin a battery can be, but that becomes less relevant in 3D.  We are no longer restricted to two dimensions. We can build in three dimensions, enabling us to fit more electronics in a smaller space.” 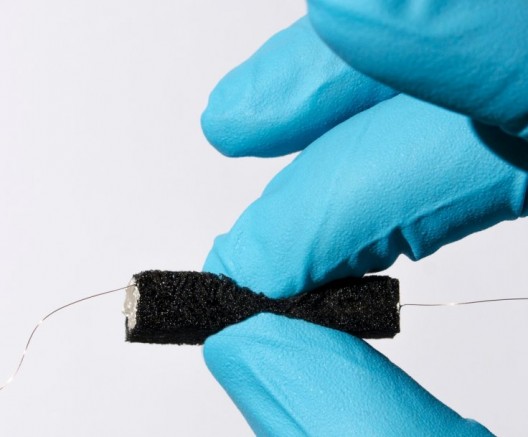 Flexibility plus! Wood fiber battery can be squeezed considerably while still storing energy

Moving past former obstacle of using three-dimensional, porous materials in crafting electrodes, researchers managed to make this a non-problem.  Hamedi adds, “In fact, this type of structure and material architecture allows flexibility and freedom in the design of batteries,”

Think of the process as nano-pulping, breaking down tree fibers and making them “roughly one million times thinner.”  Researchers dissolve, freeze and then free-dry the resulting nanocellulose, with the moisture in the pulp undergoing sublimation – evaporating without going through a liquid state. 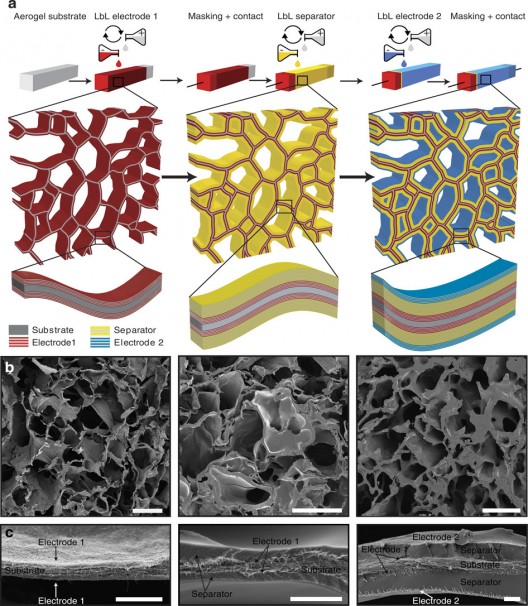 Manufacturing stages in a different kind of wood working

In a vaguely worded description, the KTH press release explains, “…The material goes through a process in which the molecules are stabilized so that the material does not collapse.”

Like Nerf, the resulting material is strong, light and soft, resembling foam in a mattress, “though a little harder, lighter and more porous.  You can touch it without it breaking,” Hamedi notes.

In a tiny and extremely enclosed space, researchers added conductive ink within the aerogel. “You can coat the entire surface within.”

Hamedi compared the surface area of the finished material to a pair of human lungs, a cubic decimeter of which would cover most of a football field.  All these nano-materials seem to emulate graphene in having incredibly high surface areas – important to conductivity. 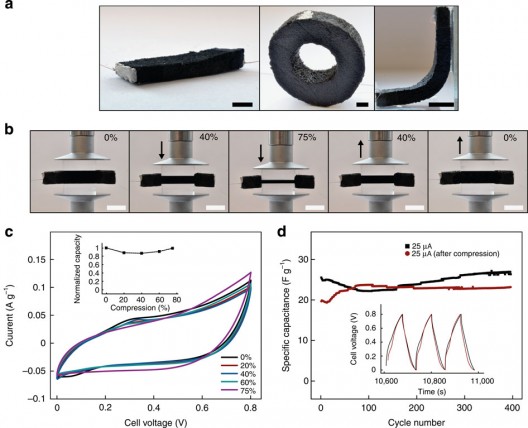 Wood battery ends up having reasonably good electrical characteristics, having survived 400 cycles, but not quite at lithium performance levels – yet.  It’s a battery that passes the squeeze test

“You can press it as much as you want. While flexible and stretchable electronics already exist, the insensitivity to shock and impact are somewhat new.”  This may lead to the battery’s use in electric car bodies and in clothing – as long as the garment has a lining – insulated from electrical as well as temperature fluctuations.  The flexible nature of the material may even provide a degree of crashworthiness.

The Wallenberg Wood Science Center at KTH performed the research, under the leadership of KTH Professor Lars Wågberg, whose work on aerogels is the basis for the invention of soft electronics.  Professor Yi Cui from Stanford University provided extra input.

The abstract for their paper provides additional details on the supercapacitor’s fabrication.  “Traditional thin-film energy-storage devices consist of stacked layers of active films on two-dimensional substrates and do not exploit the third dimension. Fully three-dimensional thin-film devices would allow energy storage in bulk materials with arbitrary form factors and with mechanical properties unique to bulk materials such as compressibility. Here we show three-dimensional energy-storage devices based on layer-by-layer self-assembly of interdigitated thin films on the surface of an open-cell aerogel substrate. We demonstrate a reversibly compressible three-dimensional supercapacitor with carbon nanotube electrodes and a three-dimensional hybrid battery with a copper hexacyanoferrate ion intercalating cathode and a carbon nanotube anode. The three-dimensional supercapacitor shows stable operation over 400 cycles with a capacitance of 25 F g−1 and is fully functional even at compressions up to 75%. Our results demonstrate that layer-by-layer self-assembly inside aerogels is a rapid, precise and scalable route for building high-surface-area 3D thin-film devices.”