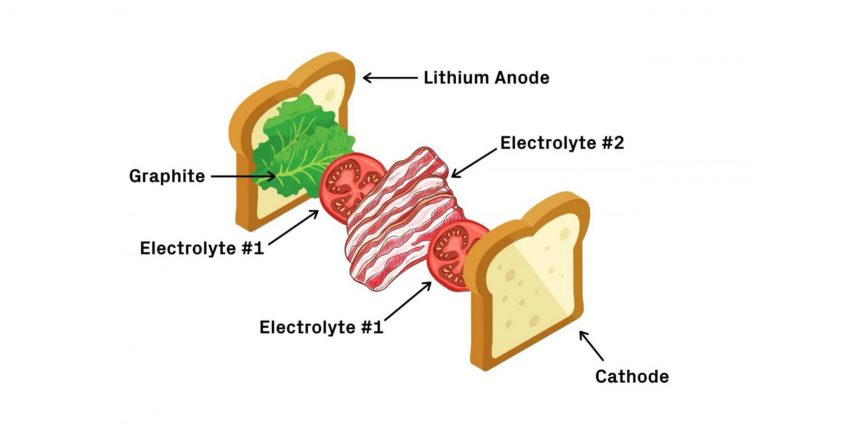 Hope reigns eternal for those tracking battery developments.  But for once, or even twice, there may be a glimmer of hope with two cutting edge batteries.  Researchers at Zhejiang University in China and Harvard University in America report promising numbers for very approaches, as divergent as their geographical locations.

Researchers at the verbosely named MOE Key Laboratory of Macromolecular Synthesis and Functionalization, Department of Polymer Science and Engineering, Key Laboratory of Adsorption and Separation Materials and Technologies of Zhejiang Province, Zhejiang University, announced their extreme long-life battery under the almost equally verbose title shown above.

The journal Science Advances published the research team’s paper in its December 15, 2017 issue, making one wonder why it’s only now being noted in publications here.

The abstract for the paper reports remarkably high charge retention after a quarter million cycles and what would seem abusive “folding.”  “Rechargeable aluminum-ion batteries are promising in high-power density but still face critical challenges of limited lifetime, rate capability, and cathodic capacity. We design a “trihigh tricontinuous” (3H3C) graphene film cathode with features of high quality, orientation, and channeling for local structures (3H) and continuous electron-conducting matrix, ion-diffusion highway, and electroactive mass for the whole electrode (3C). Such a cathode retains high specific capacity of around 120 mAh g−1at ultrahigh current density of 400 A g−1 (charged in 1.1 s) with 91.7% retention after 250,000 cycles, surpassing all the previous batteries in terms of rate capability and cycle life. The assembled aluminum-graphene battery works well within a wide temperature range of −40 to 120°C with remarkable flexibility bearing 10,000 times of folding, promising for all-climate wearable energy devices. This design opens an avenue for… future super-batteries.”

The idea of a battery lasting a quarter-million cycles and retaining almost 92 percent of its capacity is astonishing compared to the 500 to 2,000 cycles with 80-percent retention most batteries demonstrate.

Finding a way to make an aluminum-ion battery function all that well has been blocked up to this point, though.  The anode usually demonstrated excellent performance, but cathodes were weak electrically.  Researchers found a graphene film (trihigh tricontinuous or 3H3C) design that could be formed into nano-channels could enable the flow of electrolytes and ions. 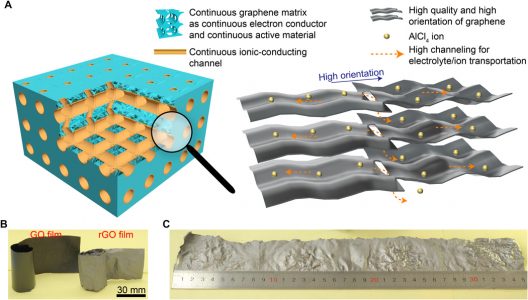 Performance is high, even when the pouch cells were folded in half over 10,000 times.  This makes the GF-HC battery a good candidate for wearable energy storage.  Charge and discharge capacity remain remarkably stable even after a quarter-million cycles. 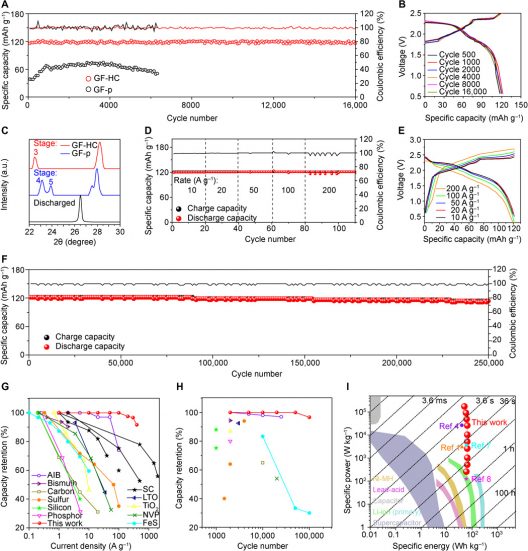 (A) Comparison of specific capacities between GF-HC and GF-p cathodes at 6 A g−1. (B) Overlapped charge/discharge curves of the GF-HC cathode at different cycles, exhibiting two charging plateaus of 1.7 to 2.3 V and 2.3 to 2.5 V and two discharge plateaus of 2.3 to 2.0 V and 2.0 to 1.5 V, which correspond well with cyclic voltammetry in fig. S10. (C) In situ XRD results of fully charged GF-HC, GF-p, and fully discharged GF-HC cathodes. (D) Stable specific capacities of the GF-HC cathode at ultrahigh current densities from 10 to 200 A g−1 and (E) corresponding charge/discharge curves. (F) Stable cycling performance of the GF-HC cathode at current density of 100 A g−1 within 250,000 cycles. (G and H) Comparison of rate capability and cycle life characteristics between the GF-HC cathode and various research results. Legends of (H) are also listed in (G). Detailed data are listed in table S1 (1, 2, 4, 7, 8, 15, 16, 33–48). (I) Comparison of the energy/power density of Al-GB with multiple commercialized energy storage technologies and various research results (49).

Harvard researchers built a bacon, lettuce, and tomato sandwich of a battery – at least that’s how the school’s Gazette describes it.  Researchers describe it this way.  “Our multilayer design has the structure of a less-stable electrolyte sandwiched between more-stable solid electrolytes, which prevents any lithium dendrite growth through well localized decompositions in the less stable electrolyte layer. A mechanism analogous to the expansion screw effect is proposed, whereby any cracks are filled by dynamically generated decompositions that are also well constrained, probably by the ‘anchoring’ effect the decompositions induce.”

The Gazette expands on its description of what goes on in the battery.  “The first electrolyte (chemical name Li5.5PS4.5Cl1.5 or LPSCI) is more stable with lithium but prone to dendrite penetration. The second electrolyte, (Li10Ge1P2S12 or LGPS) is less stable with lithium but appears immune to dendrites. In this design, dendrites are allowed to grow through the graphite and first electrolyte but are stopped when they reach the second. In other words, the dendrites grow through the lettuce and tomato but stop at the bacon. The bacon barrier stops the dendrites from pushing through and shorting the battery.”

The illustration helps visualize matters, but makes one wonder about the analogy.  If dendrites (teeth-like projections) can pierce the first piece of bread, the first layers of lettuce and tomato, but stop at the bacon, is it possible to eat the sandwich?  Coming from either side, the bacon would be impervious.  It’s great for batteries, anyway. 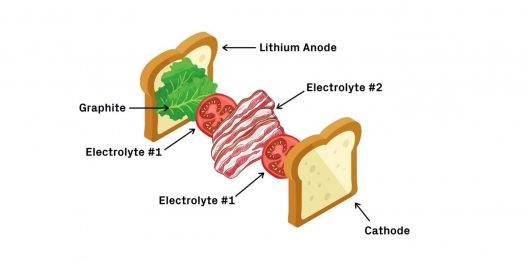 While not as long-lived as Zhejiang University’s battery, the Harvard cell is sufficient for all practical purposes.  the Li-metal anode paired with a LiNi0.8Mn0.1Co0.1O2 (lithium, nickel, manganese, carbon) cathode is very stable, retaining 82-percent of its charge after 10,000 cycles at 20C.  Oddly enough, at a lower 1.5C rate, the battery keeps only 81.3-percent capacity after only 2,000 cycles.  (10,000 cycles would allow a full charge-discharge cycle every day for over 27 years.)

Performance at the micro-meter-sized cathode level is great, with a specific power of 110.6 kilowatts per kilogram and a specific energy of up to 631.1 Watt-hours per kilogram.  One wonders what the numbers will be at real-world scale.

A paper on the work, “dynamic stability design strategy for lithium metal solid state batteries,” is published in the journal Nature.  Even the abstract is highly detailed.

A solid-state electrolyte is expected to suppress lithium (Li) dendrite penetration with high mechanical strength.  However, in practice it still remains challenging to realize a lithium metal anode for batteries, because micrometer- or submicrometer-sized cracks in ceramic pellets can frequently be generated during battery assembly or long-time cycling. Once cracks form, lithium dendrite penetration is inevitable. Here we describe a solid-state battery design with a hierarchy of interface stabilities (to lithium metal responses), to achieve an ultrahigh current density with no lithium dendrite penetration. Our multilayer design has the structure of a less-stable electrolyte sandwiched between more-stable solid electrolytes, which prevents any lithium dendrite growth through well localized decompositions in the less stable electrolyte layer. A mechanism analogous to the expansion screw effect is proposed, whereby any cracks are filled by dynamically generated decompositions that are also well constrained, probably by the ‘anchoring’ effect the decompositions induce. The cycling performance of the lithium metal anode paired with a LiNi0.8Mn0.1Co0.1O2 cathode is very stable, with an 82 per cent capacity retention after 10,000 cycles at a 20C rate (8.6 milliamps per centimeter squared) and 81.3 per cent capacity retention after 2,000 cycles at a 1.5C rate (0.64 milliamps per centimeter squared). Our design also enables a specific power of 110.6 kilowatts per kilogram and specific energy up to 631.1 watt hours per kilogram at the micrometer-sized cathode material level.

Not Ready for Prime Time

Note that neither battery is anywhere near production, both being at the laboratory phase.  Both, however, show promise for the future.  How far in the future is unknown.