Protoplane, the French manufacturer of the Ultra ultralight two-seater, has big plans for increasing the efficiency of an already efficient aircraft. Their petrol-powered, 450 kilogram (990 pound) all-up weight monoplane can cruise, according to the company, at 220 kilometers per hour (137 miles per hour) on only 12 liters (a little more than 3 U. S. gallons) per hour, achieving 43 miles per gallon.  At slower speeds, the plane can stay aloft for nine hours on its 90 liters of fuel. Protoplane hopes to market the first electric two-seater in 2010, basing the design on improvements in “weight, aerodynamic efficiency, batteries, motors and propellers.” 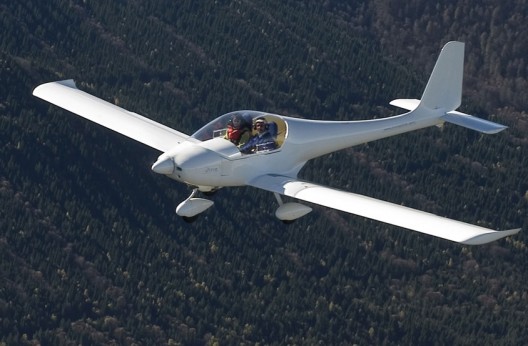 Their web site sets forth Protoplane’s objective. “Making an electric aircraft is very difficult, because one pound of mogas stores the same energy as 54 pounds of the best space designed Lithium-Ion battery cells ; So Ultra-e focus[es] on the objective of running 280 km (174 mi) at 160 km/h (100 mhp) with 21 kWh, equivalent to 3,2 l of mogas (0,85 USG).” These are astonishing numbers, considering the fuel use of their admittedly already highly efficient craft. With its Wortmann airfoils, 11 meter wing, and a claimed L:D of 24:1, the current design will need considerable refinement to reach the stated goal.

Protoplane adds a grace note to their siren song. “To save Earth resources, solar panels on hangar’s roof will provide the Ultra-e with 2 to 3 daily flight hours.” This sounds a great deal like Greg Cole’s plan for his Goshawk, shown on CAFE Foundation advertisements for last year’s Electric Aircraft Symposium, and hints that great minds do indeed independently think along similar paths.