Just days after flying his electric Lazair for the first time, Dale Kramer attached a float, outriggers, and retractable landing gear to his ultralight craft, took off from the grass field near his home, and flew to a nearby lake to make his first water landings and takeoffs.  He even managed to ridge soar the aircraft and stalk floating ducks.

Having designed the Lazair 30 years ago, Kramer was heavily involved in the burgeoning ultralight movement, and over 1,200 of the twin-engined craft were built.  Today, he’s taking a lead in creating a low-cost ultralight electric flyer, topping the considerable accomplishment with a true world first – a twin-motored ultralight electric amphibian. 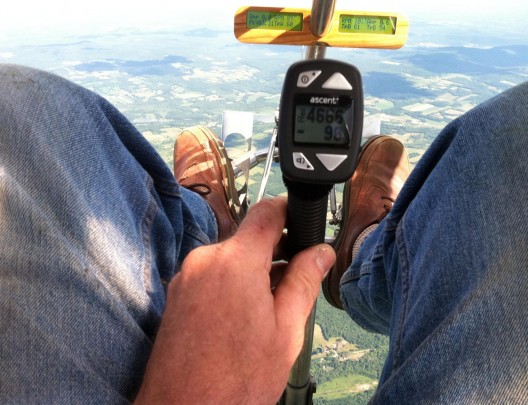 Electric Lazair at a chilly altitude. EagleTree motor monitors are on a piece of wood from Glenn Curtiss' home.

He uses a pair of Joby JM1 motors, monitored by Eagle Tree instuments mounted to a piece of wood that was part of Kramer’s house in Hammondsport, New York.  The house, Kramer found after living there nine years, was once home to Glenn Curtiss, chief rival to the Wright Brothers and considered the “father of naval aviation.”  Curtiss’ middle name was Hammond, perhaps accounting for the town’s name.  Kramer has the small piece of brightwork at a point where he can readily scan them along with an Ascent variometer and height gauge attached to the top of the control stick.

Having made two flights of over two hours each over the weekend and reaching altitudes where the temperature was low enough to make him regret wearing only a T-shirt, he took the adventure to a new level on Tuesday. 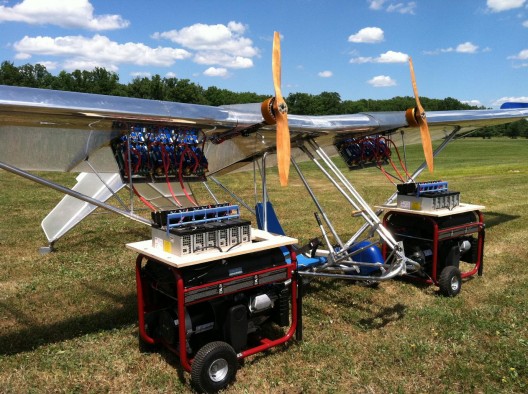 “…Earlier today I took the wheels off the Lazair and re-installed the mono-hull amphibious float. The airport I have been flying at is about 3 miles east of our house and about 700 feet higher than the lake. I wanted to fly the Lazair off the grass runway and land on the water in front of our house as quickly as possible so that the batteries would still be mostly charged up. That short flight took about 7 minutes. The whole day I kept reminding myself that I must remember to retract the gear when I got over the lake, fortunately I remembered.  I waited on shore for a few minutes for the people who saw the takeoff at the airport to arrive at the lake and then I got back in it to see how well the Lazair performed in water takeoffs. 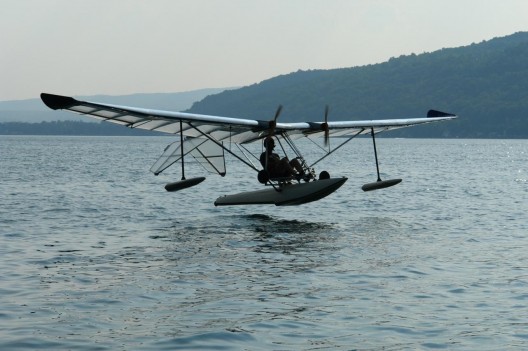 Dale Kramer bringing the amphibian back from some ridge soaring

“The first water takeoff was straightforward and I would say it performed not quite as well as our JPX gas engines but very adequately. I spent the next 15 minutes or so just having fun around the lake and flying down the lakeshore waving at cottagers. I found that I could cruise 50 feet off the water at about 3100 rpm which is about 70 amps draw (it seemed to take 2600 rpm and 45 amps to keep me up with the wheels only Lazair) . I threw in a touch and go right in front of our house and then noticed the gusty wind at water level was smoother a couple hundred feet up and it was about 45 degrees off perpendicular to the lakeshore hill. There were also some seagulls ridge soaring the trees along the shore. Sooo, up I went and started ridge soaring the Lazair. I was not able to turn the motors off completely for very long but at about 1800 rpm I could generally maintain height. I did this for 5 minutes or so and then decided to land in order to try another water takeoff at 50% battery state of charge.

“This second takeoff was much longer but mainly because it needed a new technique I had not yet figured out.  Once the bow wake had come back on the side of the float and stopped I needed to give full down elevator to force the airplane to continue to accelerate. Once I figured this out it was not long before I was in the air. I guess we learn something every day, or maybe I re-learned this one.

“I spent another 20 minutes or so having fun again and landed when the battery was done. I have not charged them yet so I do not know exactly what was used. It took till after dark to get all things battened down and then we got hit by a thunderstorm just as we were walking up to the house.

“You can see in some of the pictures how I put on a shield/cowl to cover the controller and protect it from spraying water from the float.

“At this point I am thinking of flying the amphib Lazair at Oshkosh, I will keep posting as I have more info.”