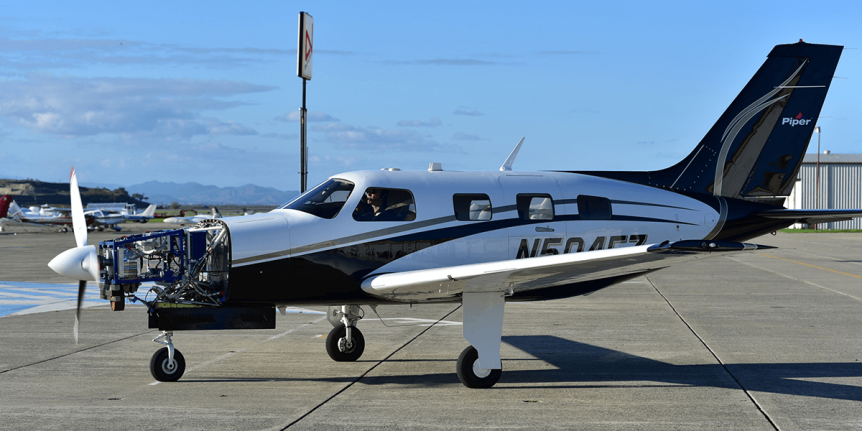 Tucked away in the quiet little airport at Hollister, California, ZeroAvia has stealthily been developing a hydrogen-powered Piper Malibu, and flying it for the last six months.  It sounds like a regular aircraft taking off and passing overhead, even with its two 130 kilowatt (174.26 horsepower) electric motors. ZeroAvia claims 275 kW (369 hp) for the pair.  From the videos, propeller noise seems to be much the same as a conventional, internal-combustion powered Malibu, but lacks the added noise of the engine.  Piper M-series aircraft are normally powered by a Teledyne Continental Motors TSIO-520BE engine rated at 310 hp (230 kW). 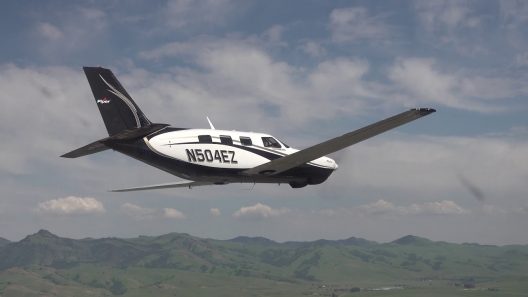 ZeroAvia’s 2-ton, 6-seat test platform is the largest zero-emissions aircraft flying, according to the company

Valery Miftakhov, ZeroAvia’s founder and CEO announced, “Right now we have an aircraft that’s six seats and 2 tons as an R&D demonstrator. Next year we’ll have a 20-seat aircraft and we’ll submit the design for [Federal Aviation Administration (FAA)] certification.  That’s what drives the 2022, 2023 timeline. At that point, we’re expecting to have certification and put the system into commercial service.”  The aircraft will have a range of 500 miles – commuter liner specs.

In response to your editor’s queries, Dr. Miftakhov (he has a PhD in physics) wrote that we will learn more about ZeroAvia’s partners (including motor suppliers) in the next few weeks. 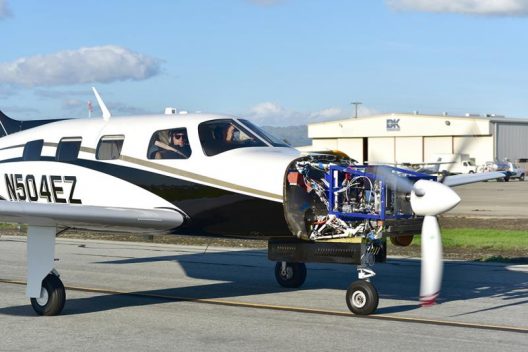 An even bigger problem faces H2-powered aircraft, however, and ZeroAvia has a plan to counter it.

The Big Hangup – From Where Do We Get H2?

Dr.  Miftakhov explained, “…Providing a path to clean hydrogen is one of the key components of our vision. We are working with a number of fueling partners to set up a network of on-site hydrogen electrolysis facilities powered by on-site or near-site renewable electricity. In Southwestern USA, it would likely be solar, in Norway – hydro, in UK – wind, etc, etc.”

He has already worked with distributed electric power systems, founding and leading eMotorWerks, “a world leader in EV charging stations and grid-smart charging.”  Enel acquired the company in 2017.  Many of ZeroAvia’s team members were with eMotorWerks, with others bringing expertise from Tesla, BMW, gas producer Air Liquide and NVIDIA, a firm specializing in computer hardware, software, and artificial intelligence development.  Peter Fairley, writing in IEEE’s Spectrum, notes that this leadership gives credibility to the enterprise.

The Spectrum article explains the firm’s unique business plan.  “Rather than build airplanes, ZeroAvia plans to lease its powertrain and also supply hydrogen fuel to aircraft manufacturers or airlines. ‘We’re targeting power levels that are in use today and we are able to utilize the airframes that exist today, with minor modifications,’ says Miftakhov.” 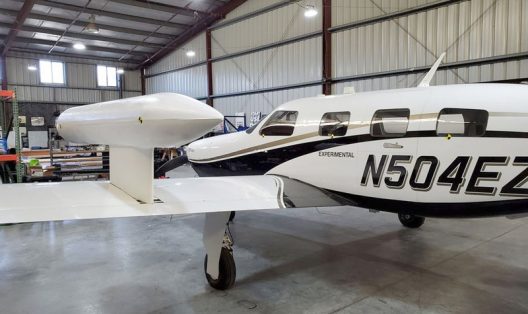 With hydrogen weighing in at one pound for the equivalent energy of a gallon of gasoline (which weighs about six pounds), the potential weight savings is an obvious draw for the elemental fuel.  Storage containers can reduce some of that advantage, but modern carbon fiber or other composite materials can reduce that weight.

After sorting out development of the Malibu-sized craft, ZeroAvia plans on powering a larger craft in the commuter-liner size range.  Miftakhov’s schedule is a rapid one, and we can look forward to seeing his leased powerplants flying overhead in the next few years if all goes well.