ZeroAvia is finding its way into the development of hydrogen-fueled aviation, and finding along its way great interest and challenges.

Val Miftakhov, founder and CEO of ZeroAvia, has grand plans for his company and the clients it will serve.

Lurking on the sidelines of the Victorville, California airport for what seemed years, this craft was a great mystery with unspecified potential.  Now it’s flying with a 550 horsepower RED (Raikhlin Engine Development) V-12 Diesel powerplant and seems to fulfill the dictum that if it looks good, it will fly well.

The bullet-shaped aircraft can fly for a mere $328 an hour, taking six passengers over 400 miles in that time.  Otto compares this to the $2,100 per hour operating cost for a more conventional executive transport.

With a ZeroAvia propulsion system, Celera would add the advantage of zero carbon flight.

Celera’s plans include a 1000L model, which will double interior volume within a slightly larger laminar flow fuselage. 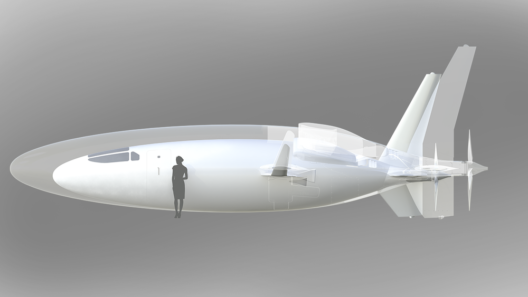 ZeroAvia has two Dornier DO-228 commuter craft – one in England and one at their Hollister base.  According to one statement, the projects will be similar in most respects, with each group trying different variations on the theme.

The 19-passenger load allows ZeroAvia some latitude in certifying their results.  Anything larger falls into a more stringent classification.

The 600 kW powertrain is expected to be certified within two years.

ZeroAvia will convert the Hollister 228 in three to four months to prepare for test flights, to be carried out with a conventional engine on one wing and a hydrogen-electric power system on the other.  Tests “will demonstrate passenger, cargo, and industrial use cases.”  ZeroAvia will expand its Hollister workspace with a new 15,000 square foot hangar and more staff.

Over 1,000 Mitsubishi Commuter Regional Jets (CRJ) are available for retrofits, allowing ZeroAvia to demonstrate the emissions reductions and potential cost savings for small, regional airlines.  With frequent takeoffs and landings and short routes, such regional craft undergo fairly rigorous schedules compared to long-range craft that only land or take off every ten or twelve hours. 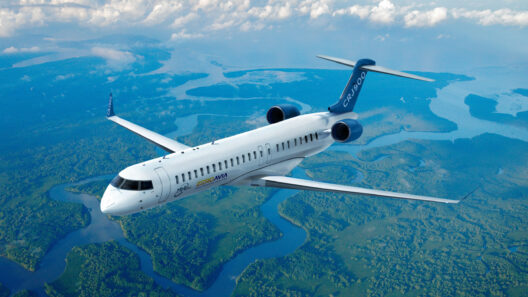 To expedite the retrofits MHIRJ will, ”Provide engineering services, data, and certification support relevant to the CRJ700, enabling ZeroAvia to optimize its hydrogen-electric powertrain.”

Miftakhov explained this made the CRJ a, “…frontrunner for the earliest operations using true zero-emission engines. This agreement is a giant step forward in delivering hydrogen-electric engines to the regional jet segment.”

He added, “There are hundreds of CRJ-series aircraft in daily operation across North America, transporting millions of passengers.  All these flights can and should be zero-emission well before the end of this decade.”

Working with Alaska Airlines, ZeroAvia is investing $5.5 million an old warehouse at Paine in Everett, Washington, also home to Boeing’s massive construction operation.  Washington State’s Department of Commerce awarded the company a $350,000 grant to help develop the research and development facility.  Miftakhov said the grant “closed a gap” to build out the aged facility.

Paine Field is part of Snohomish County’s more than 500 aerospace companies, as reported by Janice Podsada of the local HeraldNet news outlets. According to her report, “The cluster generates more than $60 billion in annual revenues and supports 159,000 direct and indirect jobs, according to Economic Alliance Snohomish County.” 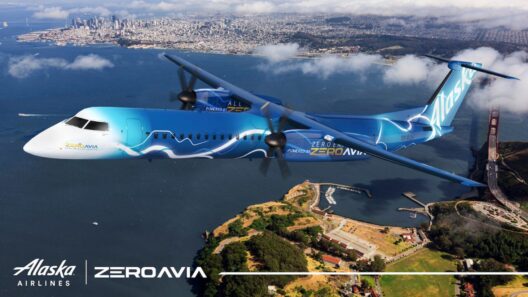 Washington Governor Jay Inslee explains, “This project is an important part of Snohomish County’s continuing efforts to maintain a competitive edge and strengthen the community with good jobs in the aerospace industry of the future.  It enables advances in manufacturing and exploring opportunities for cleaner aircraft fuel.”

The company has secured experimental certificates for two prototype aircraft from the Federal Aviation Administration and the United Kingdom’s Civil Aviation Authority.

Snohomish County Executive Dave Somers says. “This addition to our aerospace cluster at Paine Field will help expand our already impressive cutting-edge base of technology companies.”

United is the parent company of Alaska Airlines, so contiguity of efforts makes sense.  ZeroAvia will be retrofitting Alaska Airlines airplanes, and United could participate in conversions of its regional craft.

ZeroAvia would remove jets, replace them with H2-fueled props

Connected Places Catapult, in partnership with ZeroAvia, have built the first landside to airside hydrogen refueling pipeline with a trolley for aircraft refueling. Being the first in the UK to operate at high pressure, the pipeline enables the full ecosystem use of hydrogen in an airport environment; from production, storage, and to the aircraft for refueling. 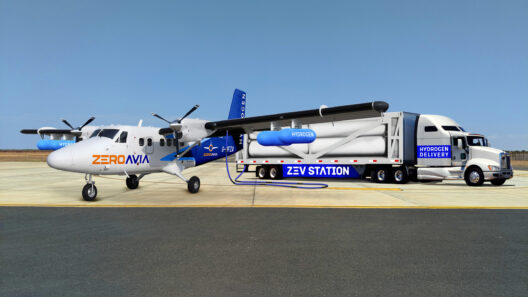 In America, ZeroAvia will develop hydrogen refueling systems at Californian Airports having signed a Memorandum of Understanding (MOU) with ZEV Station to develop green hydrogen infrastructure on the ground.

With multiple projects and daunting goals, ZeroAvia and its partners are embarking on aviation fueled by a very different approach than those already in play.  The stakes are high and the game is about to start.