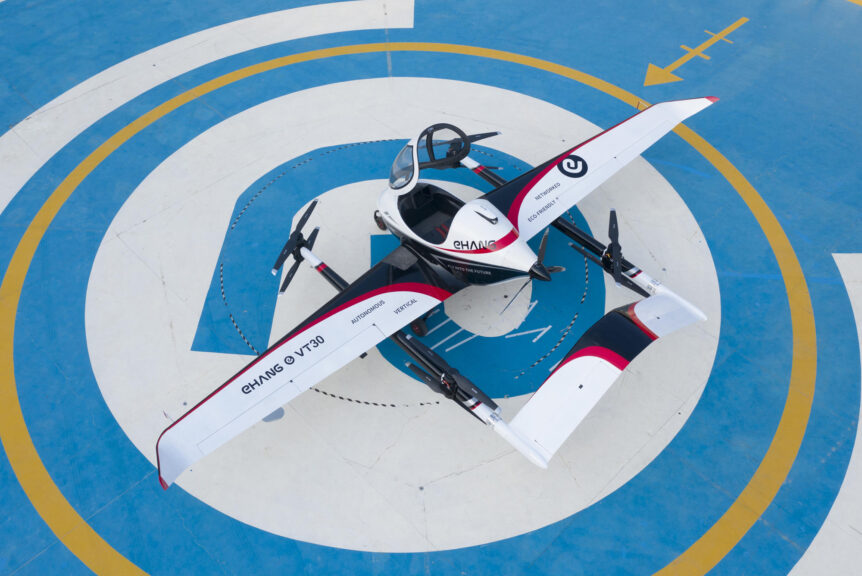 Some formerly rotor-only eVTOLs are transitioning to a new configuration – one with wings for greater range and speed.  Vertical takeoffs and landings are OK for short-range Urban Air Mobility (UAM), but not necessarily good for longer range flight.  Hovering flight requires thrust equal to the weight of the vehicle, and climbing requires additional thrust.  Switching to wing-borne flight reduces the power necessary and increases flight duration.

Some trends in housing and commutes indicate longer, regional flights may be necessary to fetch workers from ever more far-flung homes.  Purely rotor-borne flight will still be viable for short trips with batteries, but wings add speed and endurance.

Volocopter, having started with a simple multi-rotor prototype 10 years ago, now offers VoloCity, an 18-rotor eVTOL (electric Vertical Take Off and Landing) craft soon to start service in Singapore,  Since the island nation is only 283 square miles, about 3.5 times the size of Washington, D. C, that makes short hops within a tight urban setting plausible.

VoloConnect adds wings and two horizontal thrusters to propel forward aerodynamic, rather than vertical flight.  Six propellers provide lift and the craft transitions to forward flight with those six stopped and the thrusters enabling speeds up to 250 kilometers per hour (155 mph).  Cruising at 180 kmh (110 mph), VoloConnect can carry its four passengers up to 100 kilometers (62 miles).  The battery-powered craft can carry a payload of 300 to 400 kilograms (660 to 880 pounds).

Volocopter CEO Florian Reuter is enthusiastic about having an 18-rotor urban machine and a winged commuter under test at the same time.  “Having a whole family of electric aircraft in the test flight phase is a pioneering performance.”

Completing over 1,500 test flights and raising over  €495 million ($626 million) in capital from investors such as Geely, WP Investment, the Mercedes-Benz Group, DB Schenker, BlackRock and others, Volocopter seems ready to continue its 10-year line of successes.

E Flight Journal reported on the unveiling of Autoflight’s V1500M at the 13th China International Aviation & Aerospace Exhibition in Zhuhai, China.  “With maximum takeoff weight of 1500kg 3,307 pounds) V1500M is fully electric and has 4 seats, 200km/h cruising speed and 250km (155 mile) range. V1500M has 8 propellers for vertical takeoff and landing, and two propellers dedicated for cruise. AutoFlight plans to conduct maiden flight of V1500M in the near future and is already producing and operating the V400 unmanned cargo drone (with 400kg (880 pounds) maximum takeoff weight) in China under CAAC (the Chinese Civil Aviation Authority ) regulations.”

eHang is already widely flown in China and other locations, having even performed test flights with its brave board of directors and city officials from its home base in Guangzhou, China.  With over 2,000 such hops by 2020, the firm has demonstrated a good safety record with its two-passenger machines.

Its 100-minutes of flight, to achieve 186 miles range, would have to include at least brief periods of lift-off and touchdown, so something a little over 100 mph seems plausible.

Autonomous, the VT-30 has triply-redundant fly-by-wire controls, which, reported by eVTOL.news, “can be flexibly altered into multiple modes, providing a much higher safety level for the aircraft. The aircraft has been designed with inter-city travel in mind, that is, to fly people between two cities.”

According to eHang, “VT-30 is designed to achieve a maximum balance of hybrid lift and push, which has the advantages of intelligent safety features, autonomous flying capabilities, cluster management, low noise and so on.”