David Ullman, a professor emeritus at Oregon State University, predicted electric flight’s future in articles in 2009* and 2010**.  His predictions have come (mostly) true and David is working to fulfill the rest.  His background in mechanical and aeronautical engineering provides credibility for his prognostications, and he’s taking practical steps to take electric aviation to a next, very creative level.

While Uber’s Elevate Summit in Dallas earlier this year focused on big-money players in the vertical aviation world, David and co-creator Vincent H. Homer promoted their paper, “The IDEAL for Near-VTOL Aircraft.”  IDEAL represents “Integrated Distributed Electric – Augmented Lift” flight, using “thrust from distributed electric propulsion to improve the lift and drag performance of the aircraft during takeoff, cruise and landing.”  As their paper explains, VTOL flight requires power equal to 1.25 times the weight of the aircraft to ensure secure takeoffs and landings.  An IDEAL aircraft would require thrust equaling about one-third of the STOL craft’s weight to provide excellent performance. 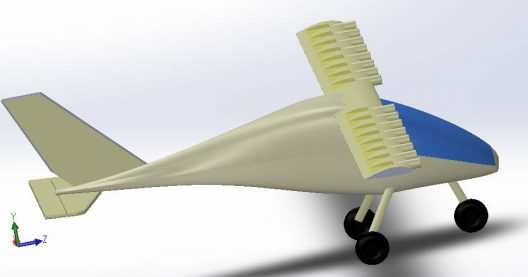 It doesn’t look much like a four-seat Jabiru, but that’s the donor plane for the DW-1 – the realization of an IDEAL

Because so little relative power is necessary, the IDEAL aircraft would have greater range “using current batteries,” or would be able to reduce battery weight for the same range as that of a comparable VTOL craft. 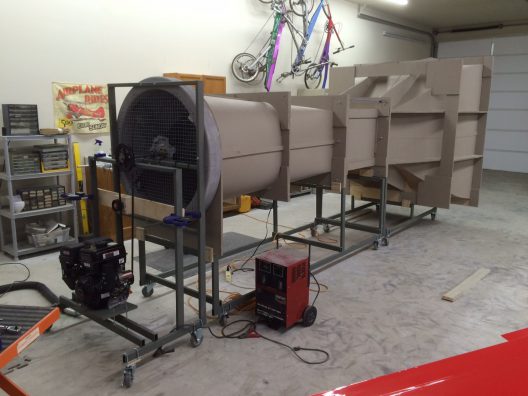 The Ullman wind tunnel in his Independence, Oregon Hangar/garage.

Even better, though, the design can provide management of the lift distribution on the wing, and the 16 to 20 motors David proposes would provide a high level of reliability.  When he first saw the design concept last year, your editor was a bit skeptical, but having seen David’s large wind tunnel and well-defined testing techniques, that outlook has been replaced by the attitude that David and Vincent are on to something with great promise. 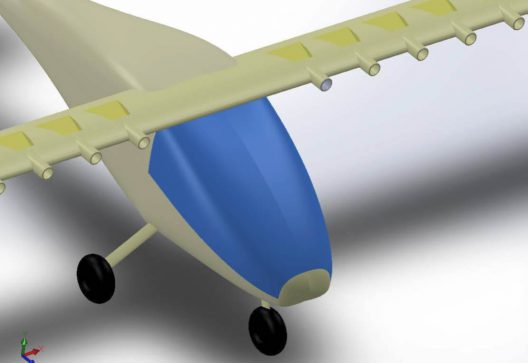 According to the presentation on the DW-1, the redesigned wing has only 60 square feet compared to the original’s 100.5, and the aspect ratio goes from 9.8 to 15.  That would reduce the overall chord of the wing to about two feet, requiring a good low-Reynolds number airfoil, something accommodated by the Riblett 37 A6 18 used in initial wind-tunnel tests. 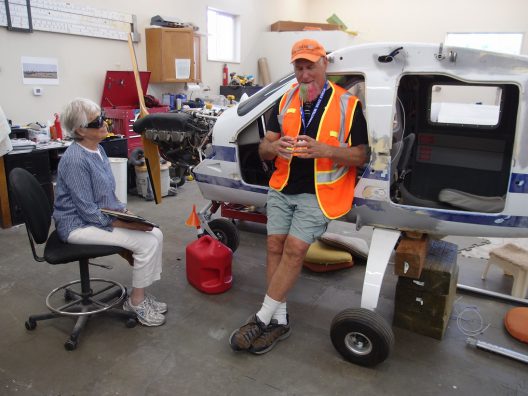 The Jabiru, which David is resuscitating from a wreck, has its six-cylinder Jabiru 3,300 cc engine in place for initial flight testing, which should take place soon.  After that, the new wing and distributed power system will take the old wing’s place, and the Jabiru will give way to a newly streamlined nose, which will also make the fuselage a lifting body.

David has selected an electric ducted fan that in the current design, will populate 16 places across the leading edge of the wing.  Each 50-millimeter (almost two-inch) diameter fan can produce 4.2 horsepower and nine pounds of thrust – 67.2 horsepower and 144 pounds of thrust total.   David notes that Airbus’s E-Fan’s two EDFs produced 86 horsepower peak.  At $375 each, the little powerhouses total $6,000 and weigh only 21 pounds total (including 11 pounds of 10 AWG wire).  Admit that it’s a bit noteworthy that the wiring weighs more than the motors. 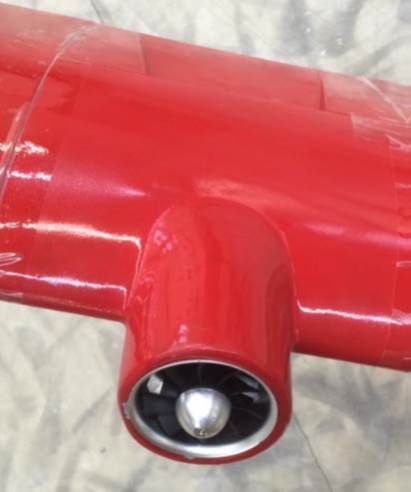 Besides the extremely redundant power system, the blowing adds to the lift coefficient for the wing.  A plain wing without flaps can take off at 51knots (58.65 mph), and the same wing with 10 degrees of flaps can leave the ground at 44 knots (50.6 mph).  30 degrees of split leading-edge flaps yields a 37 knot (42.55 mph) lift off, but David’s ducted wing drops that to 24 knots (27.6 mph) – ultralight speed.

A great deal will depend on available batteries.  David keeps an optimistic outlook about that, the chart below detailing current realities and projected, realistic assessments of the near future.  He sees batteries as evolving rapidly, with an annual rate of improvement in energy density, for instance, of seven to eight percent.  Costs are dropping, making future costs even more of an incentive to go electric.  DW-1’s 16 motors cost $6,000, but compare that to a $17,000 Rotax 912, which weighs 171 pounds and consumes about $25 per hour in gasoline.

We’ll be following up on the DW-1.  David’s history as a designer, teacher, and President of EAA Chapter 292 shows that he can organize and carry out significant programs.  His progress on what last year was a basket-case Jabiru shows his practical capabilities.  This could be a contender at STOL events in the near future.

Book Review:  What Will Your Grandchildren See When They Look Up?

Amazon explains a book edited by David Ullman this way.

“This book explores the future of aviation. It was developed by students in a class titled “The History of Aviation 1800-2200” offered through the Honors College at Oregon State University. The course reviewed the history of atmospheric flight and, in parallel worked with the students to generate a vision of the future, specifically at a time when their grandchildren become aware of objects in the sky – about 2050. The students make predictions about the future of drones, autonomous flight, supersonic passenger flight, the use of new materials and other topics driving the evolution of aviation in the twenty-first century.” 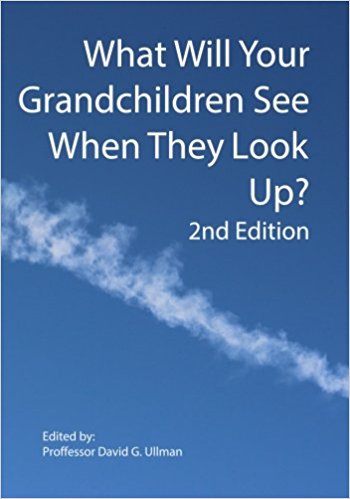 Your editor read the first edition, and aside from a few quibbles (former English teacher, you know) found the work of the young people involved to be a great reflection on David’s teaching skills.  The second edition, quibble-free, is available for a modest price and is well worth the time of any forward-looking reader.