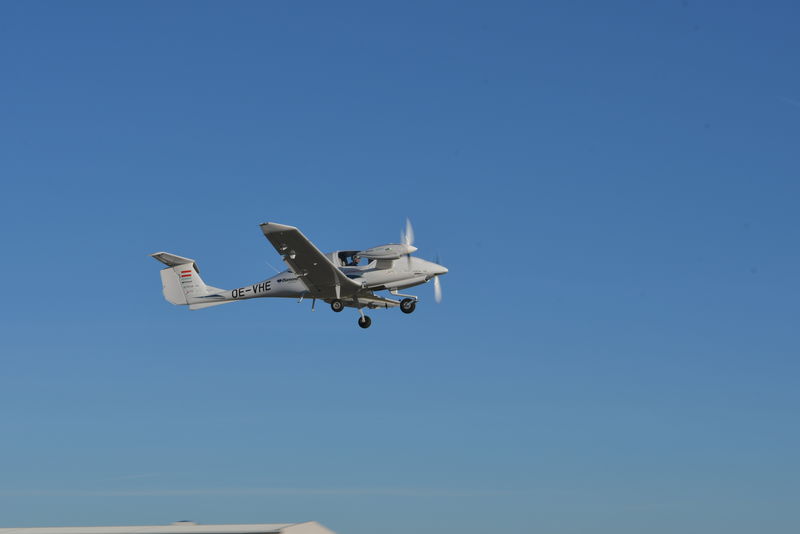 One should follow Dr. Frank Anton’s Twitter account – or at least check it occasionally.  Dr. Anton is head of Siemen’s Electric Aviation Division and posts new developments regularly.  Siemens is supplying motors to Diamond Aircraft’s prototype hybrid, a tidy tri-motor if you count the engine/generator in the nose of the formerly single-engine airplane. 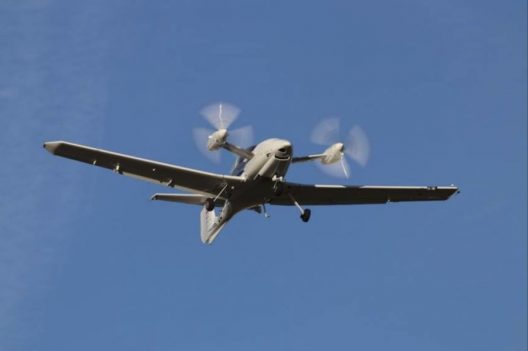 Partnered with Austria’s Diamond Aircraft Industries GmbH, Siemens motors powered an adaptation of their DA40 four-seat airplane.  A Diesel engine/generator in the nose of the formerly single-engine machine charges two 12-kilowatt batteries behind the passenger compartment and provides power to the two Siemens motors on the canard.  The whole thing looks a bit like a large economy-size Cri-Cri.

Started in 2013, the project is under the supervision and finance of the Bundesministerium für Wirschaft und Energie (BMWi, German Ministery of Economics) and the Forschungsförderungsgesellschaft GmbH, FFG (Society for the development of the research, Austria). The project has been split into two main work packages.

Siemens AG was responsible for the design and development of the electric powertrain, done within the framework of the German LuFo program, run under the DLR, Germany’s NASA.  Diamond Aircraft was responsible for the reconfiguration of the aircraft and installation of the hybrid-electric powertrain.  Diamond partnered with the TERA Group and the Johannes Kepler Universität Linz to perform aerodynamic analysis of powerplants and airframe. 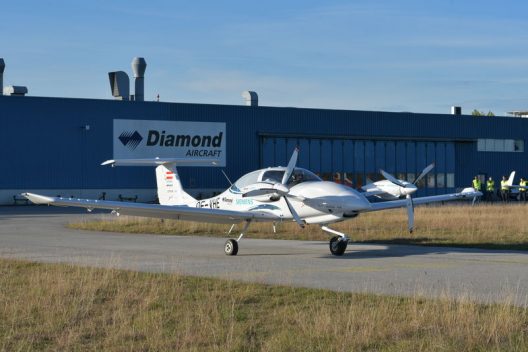 With a 110 kilowatt (147.4 horsepower generator in the nose and two motors on the canard putting out a combined 150 kilowatts, a pilot has a range of choices that allow safe flight.  Diamond reports, “With a dedicated power lever, the pilot can control the energy flow between the generator, batteries and motor. The pilot can select either pure electric mode (generator off), cruise mode (generator provides all power to the motor), and charge mode (generator charges the batteries). Pure electric, the aircraft has an endurance of approximately 30 minutes. The hybrid system extends this to 5 hours.” 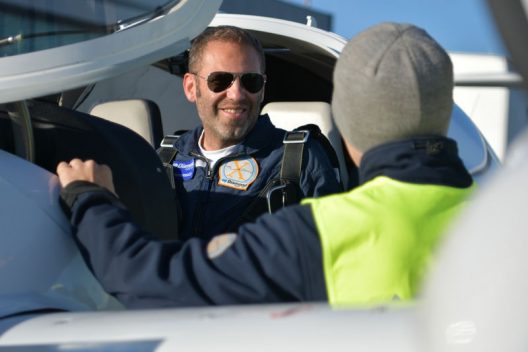 Diamond’s test pilot, Ingmar Mayerbuch, was satisfied with the system and the results of his 20-minute outing in the hybrid.  “The first flight exceeded all our expectations. The combination of the hybrid powertrain and the configuration of the aircraft is just perfect. We reached 130 knots at medium power output and climbed to an altitude of 3,000 feet.”  Ingmar was able to try out all three power modes during the October 31st flight.

Siemens and Diamond anticipate a five-percent growth per year in air traffic over the coming decades.  Each firm realizes it needs to take responsibility to counter growing aircraft emissions.  Until batteries are able to pull all the weight of that charge, we will probably see hybrid aircraft of varied configurations to increase fuel efficiency and lower emissions.

This configuration provides added safety, with the airplane capable of a safe landing even with partial systems’ failure.  Dr. Anton sees the reduced use of fossil fuels, the economy of operation and the safety of the approach as good omens for the future.  He explains, ““Serial-hybrid electric propulsion systems and distributed propulsion architectures for us are the key to a more sustainable flight future also in higher power classes. The Diamond flying testbed will help us to understand the requirements for these new propulsion technologies and to be prepared for the challenges of larger-scale applications.”

He sums it all up in an October 30 Tweet.

#HybridElectricPropulsion technology for #eAircraft is more than just a compromise until batteries improve. Many advantages of its own. Distributed propulsion with cables instead of shafts. Battery as backup power. Low noise. Better fuel economy.