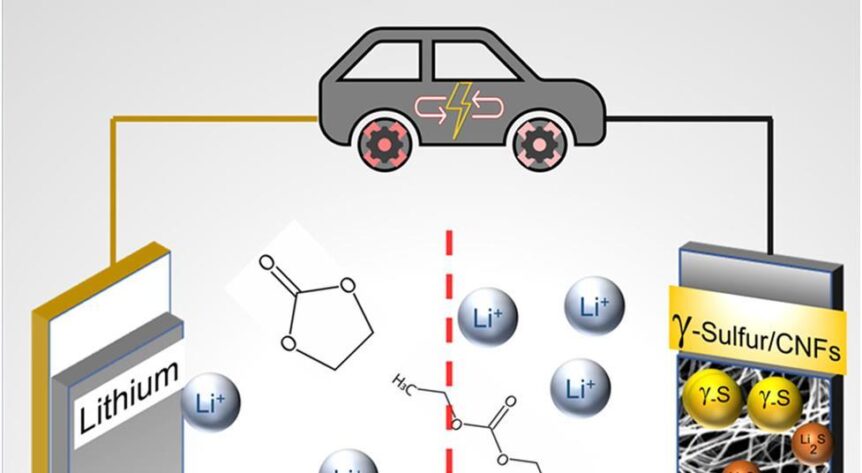 A sulfur battery uses an abundant, energy-dense material not subject to the limitations of many supply chains like those for lithium, cobalt, and nickel – all necessary for batteries as they are now constructed.  William Lockett, writing for freethink.com, highlights the potential magnitude of a discovery by Drexel University researchers. 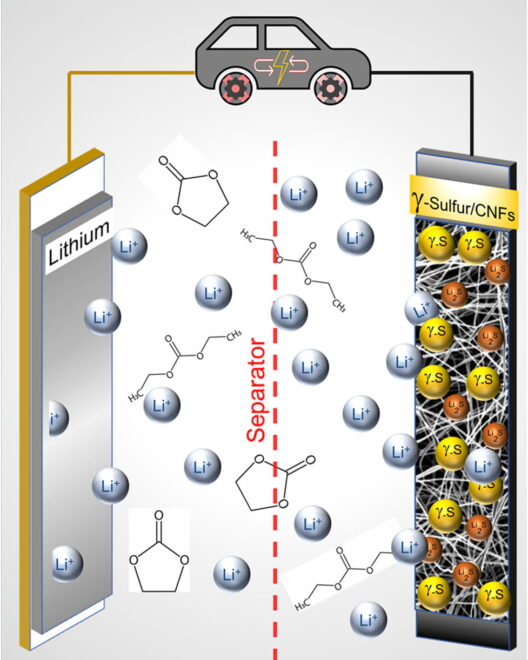 “Every now and then, revolutionary technology seems to spontaneously appear out of thin air and change our world. Dynamite, penicillin, X-ray machines, and even microwaves are all examples of such revolutionary accidental discoveries.

“Well, this year we may have had yet another. However, this time it is set not only to revolutionize the way we live, but potentially save our planet from looming climate change by unlocking an elusive technology: lithium-sulfur batteries.”

Drexel University may have come up an answer to that need, even big enough to justify Lockett’s enthusiasm.  Vibha Kalra, PhD. leads the school’s Department of Chemical and Biological Engineering, and reports on, “a way to introduce sulfur into lithium-ion batteries – with astounding results,” according to the Drexel news release.  Your editor becomes uneasy seeing words like “astounding” in scientific reports and papers.  Traditionally, such phrases are reserved for paid reviews of the latest superhero film.  That aside, the Drexel researchers seem to be on to something.

Published in Chemistry Communications under the title, “Stabilization of gamma sulfur at room temperature to enable the use of carbonate electrolyte in Li-S batteries,” the paper describes how the researchers stabilized “a rare form of sulfur that functions in a carbonate electrolyte,” widely used in commercial lithium-ion batteries.  Besides making the batteries commercially viable, Drexel’s cells could have three times the capacity of Li-ions and last 4,000 cycles – about 10 years of normal use.

To achieve this, researchers had to work around some sulfur shortcomings.  They changed the chemistry in the cathode to prevent reactions that create polysulfides that leach sulfur out of the electrode during charge-discharge cycles.

Drexel News outlines the outcome.  “Having a cathode that works with the carbonate electrolyte that they’re already using is the path of least resistance for commercial manufacturers,” Kalra said. “So rather than pushing for the industry adoption of a new electrolyte, our goal was to make a cathode that could work in the pre-existing Li-ion electrolyte system.”

Trying to confine sulfur in a carbon nanofiber cathode mesh substrate using vapor deposition didn’t quite go as planned.  Researchers did stumble on one of those accidents of science that make all the difference, though. 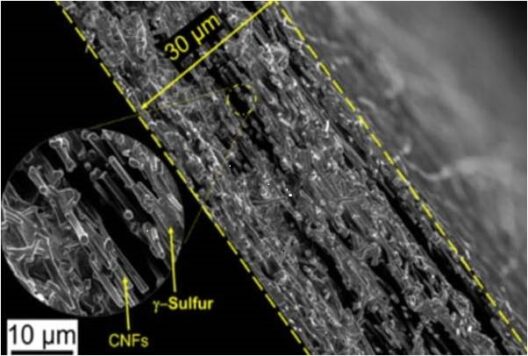 Dr. Kalra explained, “As we began the test, it started running beautifully – something we did not expect. In fact, we tested it over and over again – more than 100 times — to ensure we were really seeing what we thought we were seeing.  The sulfur cathode, which we suspected would cause the reaction to grind to a halt, actually performed amazingly well and it did so again and again without causing shuttling.”

It turned out that while vaporizing sulfur and depositing as a solid on the carbon nanofiber mesh,  “It crystallized in an unexpected way, forming a slight variation of the element, called monoclinic gamma-phase sulfur.  This chemical phase of sulfur, which is not reactive with the carbonate electrolyte, had previously only been created at high temperatures in labs and has only been observed in nature in the extreme environment of oil wells.”

Rahul Pai, a doctoral student in the Department and coauthor of the research, shared the group’s incredulity.  “At first, it was hard to believe that this is what we were detecting, because in all previous research monoclinic sulfur has been unstable under 95 degrees Celsius.  “In the last century there have only been a handful of studies that produced monoclinic gamma sulfur and it has only been stable for 20-30 minutes at most. But we had created it in a cathode that was undergoing thousands of charge-discharge cycles without diminished performance — and a year later, our examination of it shows that the chemical phase has remained the same.”

After 4,000 charge-discharge cycles, or 10 years of regular use, the cathode remains stable.  The battery’s capacity is more than three-fold that of a Li-ion battery.  Its success still intrigues the researchers.  Dr. Kalra reflects, “While we are still working to understand the exact mechanism behind the creation of this stable monoclinic sulfur at room temperature, this remains an exciting discovery and one that could open a number of doors for developing more sustainable and affordable battery technology.”

Affordability could come from replacing expensive, hard-to-find materials such as cobalt, nickel, and manganese with “more earth-abundant,” budget-pleasing alternatives such as sodium.

Dr. Kalra concludes, “Getting away from a dependence on lithium and other materials that are expensive and difficult to extract from the earth is a vital step for the development of batteries and expanding our ability to use renewable energy sources.  Developing a viable Li-S battery opens a number of pathways to replacing these materials.”  As the video suggests, Drexel researchers now need to determine how they got here, and what other possibilities exist for different applications of their findings.  We can all hope for rapid commercial success with better and less expensive batteries.