Elektra Solar introduced its Trainer, a new two-seat craft, at this year’s Aero Expo.  As reported here last year, the airplane features side-by-side seating to facilitate training, doubtless enhanced by the low noise level – 50 dB, according to the company.  Based on German ultralight standard LTF-UL 2020.  Compared to a “moderate rainfall noise,” the low sound level allows operation in noise protected areas and should enable easy communication between student and instructor.

With safety in mind, Calin Gologan, the plane’s designer, chose Geiger Engineering’s HPD50D dual motor.  Putting out 50 kilowatts continuously or 70 kW peak power, the 16 kilogram (37.3 pound) unit can run on either or both rotors.  Both independently controlled motors drive a 1.75 meter (5.74 foot) controllable-pitch propeller at up to 2,600 rpm.  If one motor fails, the remaining unit can maintain a climb rate of 1.5 meters per second (295 feet per minute).  With both motors running, the craft can climb at up to three meters per second (590 feet per minute). 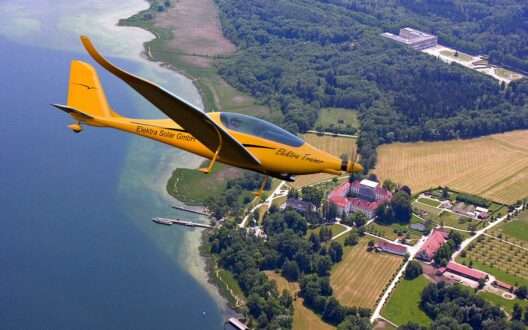 One appreciable difference between the Elektra Trainer and older conventional machines is in the low power – 12 kilowatts – required to cruise at 75 mph.  The 35 kilowatt-hour battery pack can provide sufficient energy for 2.5 hours of flight with five kW-hr. left in reserve.  The firm claims that this allows an, “Unlimited number of flight training cycles: 50 minutes flight, 35 minutes charging with 18kW power.”

A J-3 would cruise at around 70 on 75-percent of its available 65 horsepower (48.75 hp. or 35.8 kW).  A Cub or Champ is a lot draggier, with nowhere near the 28:1 glide ratio of the Trainer.  None of the older trainers could achieve the high efficiency of Calin’s design.

Since the Trainer cruises at 120 kilometers per hour (74.4 mph), its performance is close to that of a conventional light plane in which many of us learned to fly (50 year ago).  The landing speed is a little hotter than that of a Cub or Champion, 82 km/hr. (50.8 mph) with flaps, and 91 km/hr. (56.4 mph) without.  The retractable mono-wheel should help with that, and a tricycle gear might be an option for those who want simplified landings.

Considering the cabin comfort, with student and instructor sharing a nearly four-foot wide fuselage, the quietness of operation, and reasonable performance, the Trainer’s best feature may be its economy of operation. 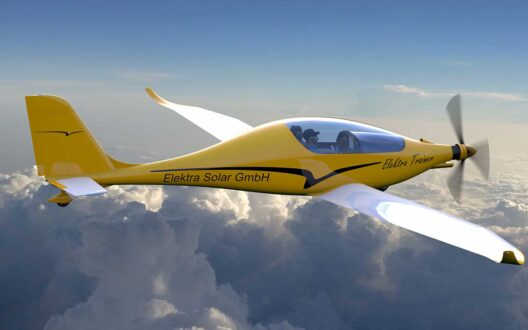 As 100 LL supplies become more limited (several airports were out), and gas prices face an uncertain future because of the war in Ukraine, unstable “friendships” with Middle-Eastern countries, and uncertainties of world trade and supply lines overall, home-grown electricity becomes a beckoning option.

Even given the premium price for the Trainer, Elektra Solar claims its 50 euro’s per hour cost of operation will more than pay for the airplane in its 10,000 hour lifetime.  That includes depreciation, electricity from chargers, battery replacement, maintenance, and insurance.  Total cost of operation for that lifetime would be about 500,000 euro’s ($521,750), half that of the anticipated 1 million euro’s ($1,043,500) a conventional trainer would cost in the same time.  That means an operational saving of 500,000 euro’s in that lifetime.

Part of this can be attributed to low maintenance costs, electric motors and controllers being far simpler than even the simplest four-stroke engine.  This will probably improve with time, batteries becoming lighter, more powerful, and cheaper.  On-field solar charging could defray the cost of electricity obtained from public utilities.

Trainers like this and Pipistrel’s Velis mark potential ways to build new markets for flight training.  The lack of vibration, quietness, ease of operation, and greater safety coupled with low operating costs may be the start of a new golden age of flight.