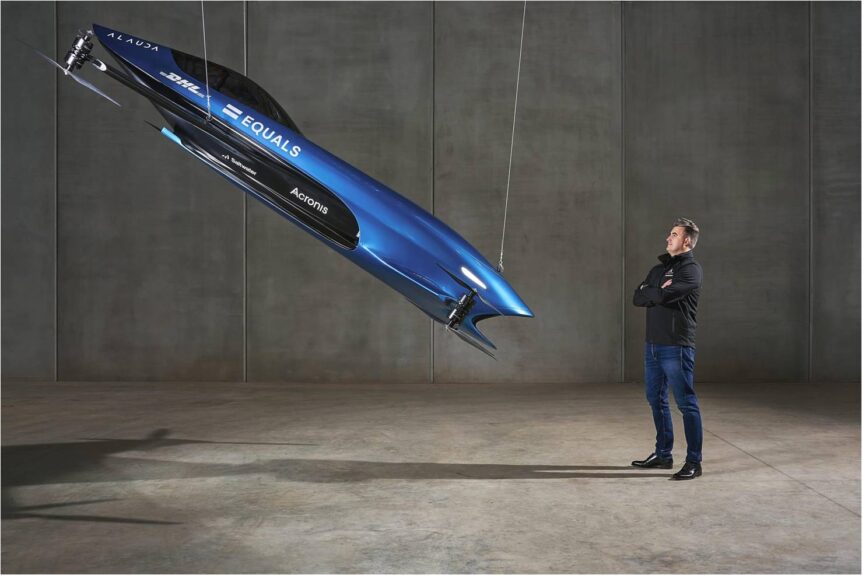 Electric Air Racing is a modern take on an age-old idea.  Ever since people tamed horses, the idea of comparing their speeds became important.  Boats, cars, and aircraft followed the same path.  As with horses, the idea that “racing improves the breed” held sway.  Now, one Australian company and a major aeronautical organization hope to make air racing a path to the future.

Matt Pearson founded the Airspeeder  racing program with the credo, “Competition accelerates progress.”  Toward that end, he partnered with Alauda, an Australian firm, to develop a group of high-performance aerial racers.  Looking somewhat like the vehicles flown by Luke Skywalker in the Star Wars films, the “flying cars” certainly evoke a performance image.

Alauda unabashedly uses the term “flying cars,” as in, “Racing to deliver a revolution in personal air mobility so everyone will own a flying car.”  They follow that up with, “At Alauda Aeronautics our purpose is to deliver on the dream of flying cars that anyone can own and anyone can fly – to transform transport to become truly sustainable.”

To fulfill that promise, they have recruited personnel from auto racing, including Head of Aerostructures Henri Nicolas, a veteran of Scuderia Ferrari’s composites team during the time when Michael Schumacher was making podium wins.  Of the 180 races Schumacher competed in for Ferrari, he won 72.

Now, Nicolas oversees structural work and flight control management.  His understanding of how to achieve light weight with great strength is particularly noteworthy, with Alauda claiming, “A greater thrust to weight ratio than a fighter jet.”  Since the Airspeeder requires its 400 kilogram (881.85 pound) weight to be lifted at all times by its eight rotors, each racer requires high power batteries.  That conflicts with the high energy needed to provide endurance and range, a challenge for any designer wanting performance and longevity.  Regardless, zero to 100 kilometers per hour takes only 2.3 seconds – quicker than a Tesla S or even a Lamborghini Huracan.

As a sad example, the playful lads at Top Gear ran an early Tesla Roadster around their airport track just a few times before running the batteries to ground, proving their dubious point about the superiority of dinosaur-devouring petrol cars.  Similarly, as with gas-powered vehicles, high power equals shorter ranges, with pit stops as part of the festivities.  Alauda’s battery packs are good for up to 20 minutes.  Such stops will probably require battery swapping, rather than charging.

A final element, that of keeping the racers out of each other’s way, is a problem to be faced at slower speeds with future urban air mobility vehicles.  Alauda must ensure that flying in close proximity at high speed is not an issue for safety, coupling eight broadcast cameras, forward-looking RADAR, laterally-looking LIDAR, an  active altimeter, and 22 sensors to collect images and data.  will enable constant monitoring of aircraft performance and operations.  Whether future races will include pilots in the cockpits remains to be seen.

Airspeeders are buzzing around a closed-circuit course in Australia, somewhat like an airborne NASCAR operation.  Open circuits over longer distances will help sell electric air racing, too.

“The first Pulitzer Electric Aircraft Race, planned for May 2023, will be a four day, 1,000 nm cross-country event beginning in Omaha, NE and ending near Kitty Hawk, NC.  The race will be open to piloted aerodynes of all types using zero-emission electric propulsion (e.g., fixed wing aeroplanes, helicopters, or multi-rotor eVTOL Advanced Air Mobility [AAM] vehicles). Because many of the potential competitors may be in a research and development phase and using experimental aircraft, the race will be a day only, Visual Flight Rules (VFR) event.  The race winner will be the pilot/crew with the fastest speed calculated from the cumulative flight time, not including time on the ground for maintenance, charging, or overnight stays.  The specific race rules have been developed by the NAA Pulitzer Race Committee and are available here.” 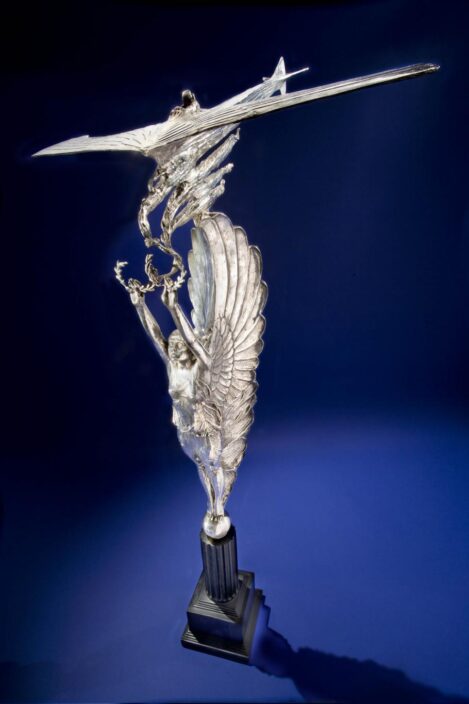 The Pulitzer Trophy was won five times in the early 1920s, mostly by Naval aviators

Several pilots have already managed flights long enough to qualify for the event.  Even in 2011, Green Flight Challenge competitors were required to round a 200-mile course at a speed better than 100 mph.   Klaus Ohlmann has flown e-Genius and other electric aircraft to many world records, and here explains the ties to the Green Flight Challenge, in which he and Eric Raymond took second place.

Electric aviation is still a young endeavor, and will benefit from competition.  Whether we end up as a participant or spectator, there are great times ahead.

Note:  The featured image is of Matt Pearson with an Alauda Airspeeder.