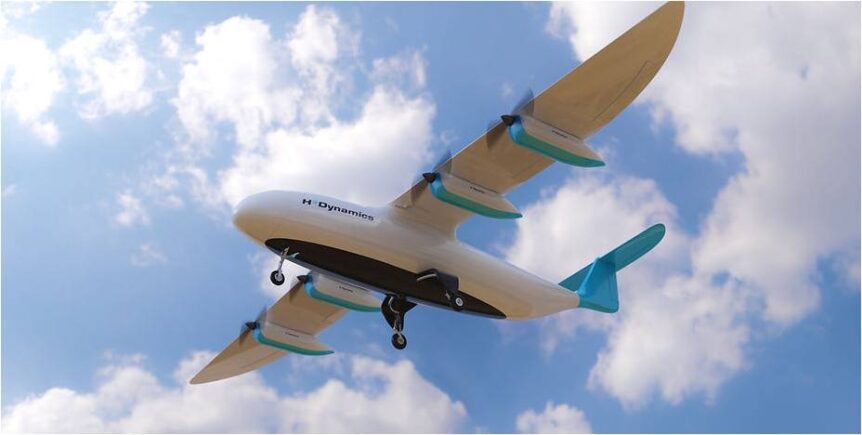 H3 Dynamics (formerly HES – Horizon Energy Systems) has flown a small example of its hydrogen-electric nacelle that could power many craft now in the concept phase.  H3 headlines its web page with the words, “Dreaming Big,” followed by the premise, “The future of aviation is hydrogen-electric, autonomous, and digital.”  Their press release declares, “The future of hydrogen aviation powered by H3 Dynamics’ distributed hydrogen propulsion nacelles has taken flight for the very first time in France.”

Hydrogen could be a dream fuel, clean burning and leaving only a little water vapor in its wake.  It has a few drawbacks, though.  H2 takes up four times the space of gasoline or kerosene for a roughly equivalent amount of energy.  In something sizeable like a semi-truck or a seagoing ship, such space requirements can be accommodated.  Airplanes need to be streamlined and svelte, so trying to carry enough energy for long ranges and endurance can spoil otherwise beautiful lines.

H3 notes it completed its first working hydrogen propulsion nacelle prototype in November 2021, and managed a first test flight in July 2022.  The aircraft seems to be an outgrowth of a design presented in this blog in 2018, and its distributed power system seems to be a refinement of the nacelles pictured in that entry. 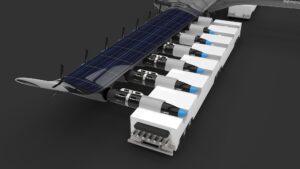 In 2018, HES planned on semi-automated insertion of H2 power pods that would connect to fixed motor on leading edge of wing

Starting small with multi-rotor drones and the growing to the flight of the 25 kilogram (55 pound) twin-motor craft at the “Hub Drones – Systematic” airfield near Paris, H3 received DGAD (the French civil air authority)

It’s the latest in a series of small leaps forward, exemplified by a single-propeller craft flown late last year.

H3 explains, “We all need to learn today with small commercial applications and gradually increase aircraft size over time together with all stakeholders – most importantly, the regulators.”

The twin-motor demonstrator features under-wing nacelles that contain the motor, fuel cell and hydrogen tank, freeing up the fuselage for cargo or passengers in future larger versions.  H3 seems to intend moving quickly on that point – scaling the power level to enable a two-to-four-passenger aircraft by the end of 2023.

H3 sees its 25-kilogram test vehicle as a “breakthrough” able to fly up to 900 kilometers (558 miles) on liquid hydrogen or 350 km (217 miles) on pressurized H2.  Even on this small demonstrator, that frees 30 liters (1.06 cubic feet) of space in the craft’s “cabin.”  At passenger-carrying scale, the volume would be revenue enhancing.  As shown on the concept  design four years ago, H2 tank/fuel-cell pods would fit in the trailing edge of the wings and power the motors in the leading edge.  The nacelles contain the entire power system and could be attached or detached quickly.

Renderings from H3 show craft with four, six, and eight propellers, an indicator of the units’ flexibility. These would be “clean-sheet” designs unlike the converted existing craft of other fuel cell purveyors.  They have a six-nacelle aircraft in development as a larger test bed/  H3, working with ISAE-SUPAERIO in Toulouse, France, looks forward to flying the Atlantic” in the coming two years.”  This ambitious goal reflects what Tine Tomazic anticipates for a 19-passenger Pipistrel design and shows the range capabilities for H2-powered aircraft.

H3 Dynamics looks forward to what a 2022 study forecasts, a global nacelle market of $7 billion 2030.  With green hydrogen becoming a growing segment of the energy storage world and bigger players such as Airbus showing an interest, there will be room for innovation and inspiration as the technology moves forward.