Jekta’s amphibious commuter liner made its debut at the Abu Dhabi Air Expo 2022.  The 10-motor amphibious, 19-passsenger craft could become a familiar sight at coastal landings around the world based on initial interest.

Deena Kamel, reporting for The National News, revealed PHA-ZE 100, short for Passenger Hydro Aircraft Zero Emissions, is now in its design stage, “with a prototype scheduled for 2026 before entry into market by 2028,” according to Jekta CEO George Alafinov.

Intended to transport people in mega-cities and coastal areas “sustainably and affordably,” according to the article, the 19-passenger is a response to a “world population with an appetite to travel safely, cheaply and ecologically.”

Mr. Alafinov makes the case for amphibious craft.  “The solution is in front of us: Instead of building airports with devastating irreversible environmental impact, we can use nature’s gift of oceans, lakes and rivers to create an affordable transport system using amphibian aviation.”

As reported in Urban Air Mobility News, Alafinov thinks, “Investors, production partners, operators see the prospects of PHA-ZE 100 as the one to revive the economy of coastal and island states, significantly reduce greenhouse gas emissions, and use its unique capabilities to operate in tourism sector while preserving nature in its original form. This is a further indication that we are on the right track, and is an inspiration for our team.” 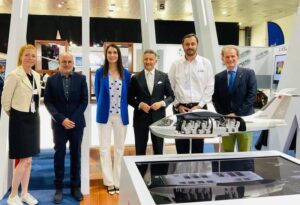 There are no hard orders yet, but Jekta is negotiating with several potential clients.  Even so, the firm has plans for a factory where the electric amphibian will be built at the Swiss Aerospace Cluster in Payerne Airport, site of other clean aviation projects such as Solar Impulse and SolarStratos.  Cost of the overall project will be 280 million Euros ($288.4 million).  Potential clients include India, Indonesia and the Philippines in South-East Asia, Brazil in South America and countries in the Oceania region. 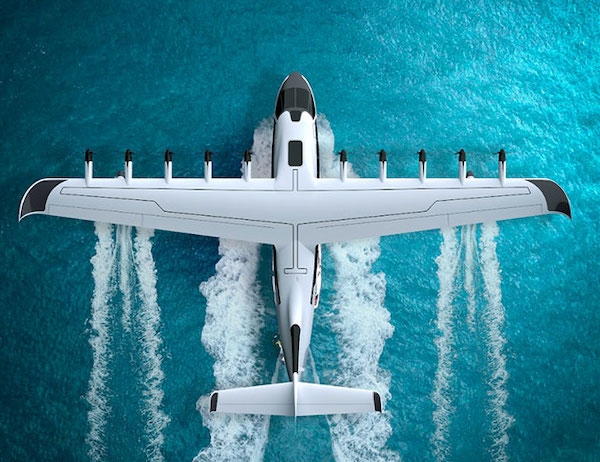 So far, Mr. Alafinov has not revealed the name of the electric engine maker, although he did show images of an axial flux motor in his Abu Dhabi presentation.

Built of fiberglass, carbon and Kevlar fiber composites, the amphibian can be configured in several passenger configurations, or as an air ambulance or cargo ship.  Interiors will include a bathroom and kitchen.  Designed to offer passenger service at the “lowest cost per passenger possible,” and with the least damage to the environment.  Most existing amphibians are old, polluting, and noisy – an untenable combination for the future.

Its low noise and “green” carbon footprint will enable flights over otherwise limited access areas such as wildlife refuges and other vulnerable sites.

Perhaps the only comparable type of “flying boat,” the Regent Seaglider might be competition for connecting seaside destinations, but it is a sea-skimming airplane, where the PHA-ZE 100 is claimed be capable of reaching 45,000 feet – probably unnecessary for short hops.

With increased numbers of tidal generators and sea-borne wind turbines in the works, a developing electrical infrastructure may be coming into play just as these seaplanes bring their need for power.  All would be welcome additions to coastal communities.