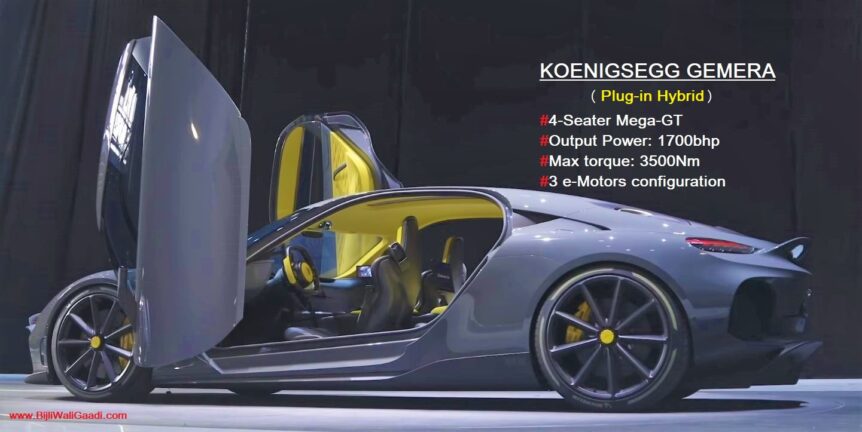 Koenigsegg (Cone-igs-egg), a Swedish car maker that enjoys shocking with its sticker prices, is going hybrid with a new, torque-dense electric motor and hybrid drive train.  The Swedish car maker is known for its ultra-exclusive, ultra-high-performance vehicles, which have even undone the Stig, anonymous race driver on the BBC Series Top Gear.

David Koenigsegg’s Gemera manages as much as 250 mph on a two-liter, three-cylinder engine, augmented by a set of three electric motors.  Describing him as, “an inveterate tinkerer” who squeezes “extraordinary amounts of power out of internal combustion engines,” Clean Technica explains the “breakthrough products that could transform the world of electric cars.”

One “breakthrough” would seem to be a package of a three-cylinder engine coupled to some powerful electric components.  The “Tiny Friendly Giant (TFG) engine pumps out 600 horsepower (450 kilowatts) and weighs only 70 kilograms (154 pounds).  It has no camshafts, relying instead on solenoid-actuated, artificial-intelligence-controlled valves to let the fuel and air in and the exhaust gases out.

Even the dual turborchargers are unique. Road and Track reports, “The sequential turbo setup is ingenious. The TFG has two exhaust valves per cylinder, one of which is dedicated to the small turbo, the other to the big turbo. At low revs, only the small-turbo exhaust valve opens, giving sharp boost response. Past 3,000 rpm, the big-turbo exhaust valves start opening, building huge boost and lots of midrange power and torque.”  The engine works and plays well with the three electric motors to provide large amounts of power and torque.

Quarks are electric motors that put out 335 horsepower (250 kilowatts) and 443 foot-pounds (6oo Newton meters) of torque for up to 20 seconds.  Combining radial and axial flux (raxial), they reportedly give a balance between power and torque.  Each motor weighs a mere 66 pounds (30 kilograms), giving it a respectable 8.33 kilowatts per kilogram power density.  A 400 horsepower Quark coupled to the TFG drives the front wheels. 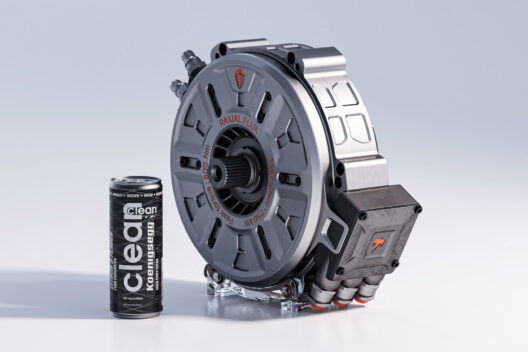 Koenigsegg’s quirky PR-speak explains the new motors.  “The Quark E-motor relooks at the fundamentals of magnetism, materials, cooling and packaging instead of following the norm, hence its name. The Quark elementary particle is the only particle to experience all four fundamental forces (electromagnetism, gravitation, strong interaction, and weak interaction). Given how it also relates to the mystery of magnetism, the name Quark rendered itself well for a novel E-motor design.”

Two Quarks and a Terrier

Arranged in a transmission/motor unit, two Quarks drive the rear wheels.  They flank a central Koenigsegg Direct Drive (KDD) system, which contains two David (named for the Biblical hero) inverters.  The whole package, at least according to one report, is called Terrier. 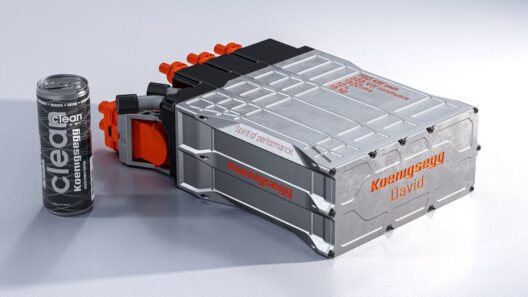 David is lightweight inverter, one per motor

Combined, the engine and three motors produce a total of 1,700 horsepower (1,268 kilowatts), enough to launch the nearly two ton car from zero to 62 mph (100 km/hr) in 1.9 seconds – roughly new Tesla Roadster times.  But Koenigsegg is not satisfied to go fully electric.   David Koenigsegg explained all to Road and Track.  “We don’t make pure electric cars because for the time being, we think they’re too heavy, and they don’t make a cool sound. And as long as we can be CO2 neutral and frugal and clean comparatively, we will push the combustion engine.” 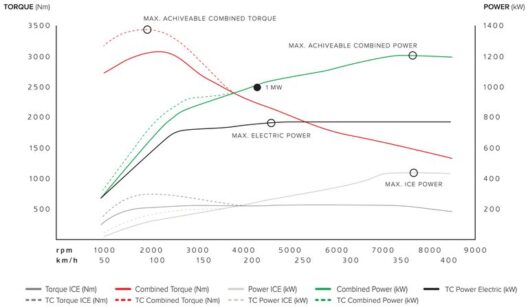 The whole package ends up being a bit of a hyper-Prius, but remember that such hybrids have been winning Le Mans for the last decade.  That Koenigsegg can claim 1,000-kilometer (620 mile) range and reasonable fuel economy is perhaps its most noteworthy achievement.

A sign of its luxury market, Gemera comes with eight cupholders – two per passenger.  One is heated and the other chilled to enhance the driving experience. 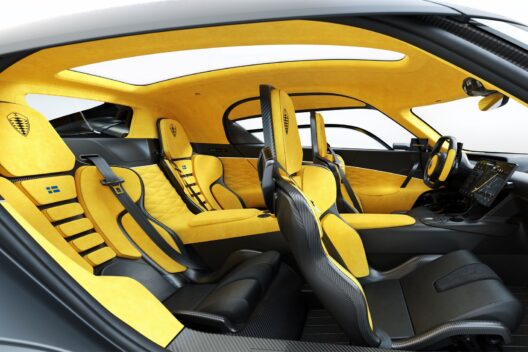 Koenigsegg’s proclivity toward light weight and extreme power contains some valuable insights that aircraft designers may find helpful.  Hollow crankshafts, adaptive valves, and other innovations show the company’s desire to “future proof” its products.  Its electric motors are competitive in terms of power-to-weight ratios, although aircraft don’t need the high rpms involved.

With the impending loss of 100 low-lead fuel for legacy engines and probably increasing prices for fossil fuels, sustainables will become ever more important, and engines for hybrid systems will need to be capable of using them.

The drive for Sustainable Aviation Fuels (SAF) is growing, and technological solutions are following demand.  We can hope for vehicles that emulate Gemera’s innovative approaches, but at a price a little lower than $1.7 million.