Phil Barnes has one of the most fascinating web sites on the Internet, combining his aerodynamic expertise and love of soaring birds with his radical approach to staying up perpetually (or until the pilot grows exhausted).  Albatross, birds he’s studied for decades, soar along the tops of ocean waves, seeking food for themselves and their broods, often traveling thousands of miles before setting down.  They have the advantage of bifurcated brains, able to stay awake in one hemisphere of the brain while the other hemisphere nods off, a trait they share with dolphins. 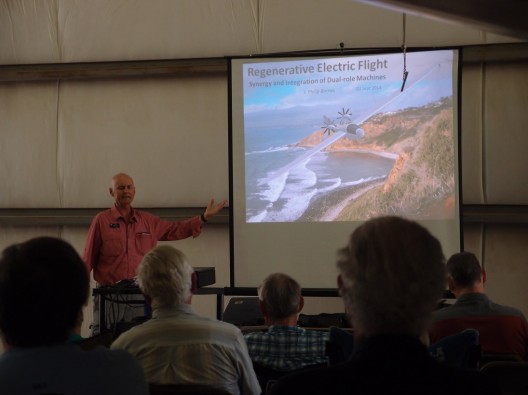 Would it be possible for humans to tap the energy in the air to soar for indefinite periods?  Could truly fuel-free flight be a reality?  Phil is betting both sides of his brain on an affirmative answer to that.

His presentation at this year’s Experimental Soaring Association Western Workshop in Tehachapi, California was more than an addendum to previous work in this area, but an expansion of the concept of regenerative soaring he and Taras Kiceniuk have pursued independently for years.  Taras has demonstrated the plausibility of the idea with a model of his Regenerator aircraft, actually increasing the amount of energy stored in the airplane’s batteries after a long flight. 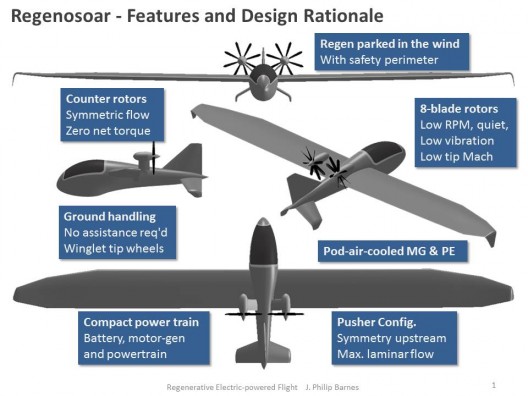 Phil Barnes’ latest iteration of his “Regenosaur” aircraft uses ideas from the Toyota Prius battery boost system, where 200 Volts rises to 600, propeller concepts that change the operation and “look” of formerly familiar propulsion systems, and application of the flying modes employed by large birds in using the least energy for the greatest gain.  The airplane is not only different from what we’re used to, but the manner of flying becomes a new arena in which to explore regenerative soaring. 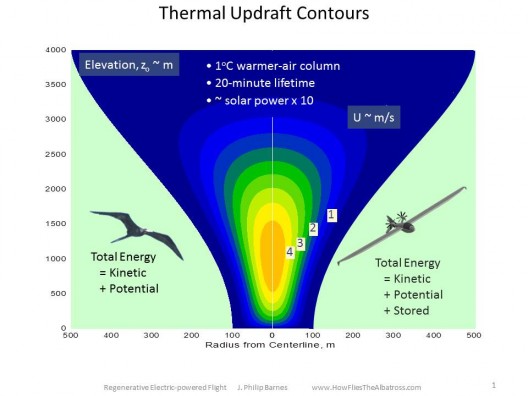 Regenosaur will share characteristics with large soaring birds, but won’t have to land to refuel

Phil explains the distinctions for the two latter conditions: “Although we include max-capacity regen here for study, only max-efficiency regen has competitive flight performance. In particular, while battery energy storage rate (last row) is highest with max-capacity regeneration, the total energy rate (dzt/dt) increases most rapidly with max-efficiency regen. Nevertheless, max-capacity regeneration proves useful in many scenarios, including strong wave lift, slope lift, and final descent. Indeed, if the last encountered updraft is near the airport, landing with significant reserve could become routine. As already noted, ground windmilling (with a safety perimeter) may be sufficient to prevent loss of charge between flights. “ 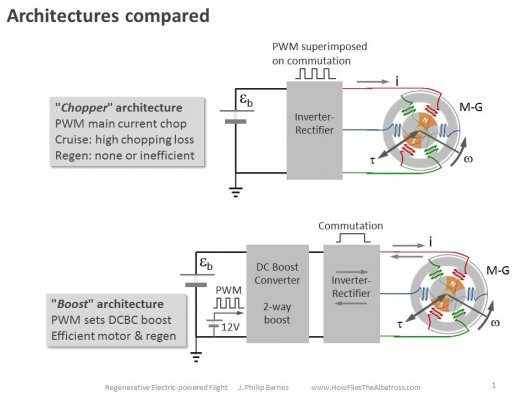 Phil discusses use of a Toyota Prius-like boost circuit in place of a “chopper” or pulse-width modulation approach to controlling current flow to motors.  See his paper on his web site for a full explanation

Regenosaur’s success will depend on its being able to exploit rising air currents at a rate that will enable batteries to be recharged within the time frame of each thermal.  The goal is to land with stored energy equal to or better than that on takeoff.  A bird can find food to replenish its energy reserves.  Regenosaur will feed from the air itself.  This, coupled with the possibilities offered by new lightweight and reasonably efficient solar cells, could bring a new and exciting technology into sport and competitive soaring.