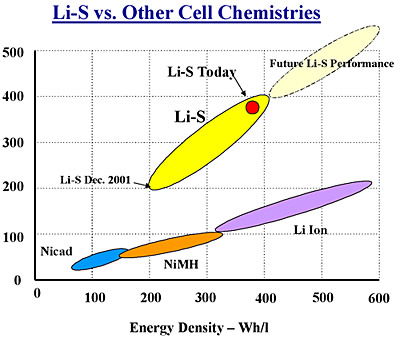 Echoing work done at Sakti3, ORNL researchers demonstrated an all-solid-state lithium-sulfur cell, addressing flammability issues shared by batteries with solid electrolytes.  Using lithium polysulfidophosphates (LPSPs) in the cathode, and which have ionic conductivities eight times higher than that of lithium sulfide (Li2S) the team coupled that with a lithium anode to create “an energy-dense, all solid battery.”  Energy density was a noteworthy 1,200 mili-Amp-hours per gram, about 7 to 8.5 times that of conventional lithium batteries.

A number of blogs repeated the slightly overheated lines from the Vanderbilt University press release: “A fevered search for the next great high-energy, rechargeable battery technology is on. Scientists are now reporting they have overcome key obstacles toward making lithium-sulfur (Li-S) batteries, which have the potential to leave today’s lithium-ion technology in the dust. Their study appears in the American Chemical Society journal Nano Letters.”

PR-speak aside, the accomplishments of Xingcheng Xiao, Weidong Zhou, Mei Cai and their colleagues result from looking for lighter and less expensive materials to replace the metal oxide in lithium-ion batteries.  They faced the problem that lithium-sulfur compounds escape from their surroundings, causing batteries to lose charge quickly.  This meant coming up with a way to encapsulate the active ingredients.

Researchers “made tiny, hollow shells out of carbon, which is conductive. They then coated them with a polymer to help confine the Li-S compounds inside. When tested, the structures kept up a high-energy storage capacity (630 mAh/g versus less than 200 mAh/g of lithium-ion batteries) over 600 cycles of fast charging and discharging.”

Myriad other projects are attacking the problem of making lithium-sulfur batteries a practical reality, and we may soon have commercial validation of their efforts.  The blog will continue to report on these and other efforts.