Magnesium carries two positive charges for every one which lithium carries.  This simple fact was inspiration for Jordi Cabana, a University of Illinois at Chicago assistant professor of chemistry in developing a magnesium-based battery.  Using magnesium in place of lithium led to this thought: “Because magnesium is an ion that carries two positive charges, every time we introduce a magnesium ion in the structure of the battery material we can move twice as many electrons,”  He added, “We hope that this work will open a credible design path for a new class of high-voltage, high-energy batteries.”

Cabana and his associates have shown they can replace the lithium ions, each of which carries a single positive charge, with magnesium ions, which have a plus-two charge, in battery-like chemical reactions, using an electrode with a structure like those in many of today’s devices. 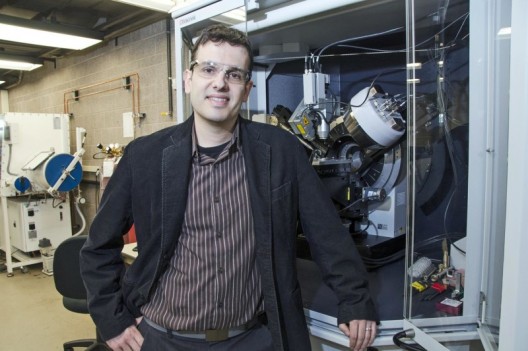 Jordi Cabana, Assistant Professor at UIC. leading his team’s research on the use of magnesium in batteries – potentially doubling energy over lithium batteries

According to the University, the research is part of the Joint Center for Energy Storage Research, a Department of Energy Innovation Hub led by Argonne National Laboratory, that aims to achieve revolutionary advances in battery performance. The study is online in advance of print in the journal Advanced Materials.

During recharging, that exchange is reversed, but with a not perfectly efficient chemical reaction.  Because the ions being moved around distort the structure of the battery, battery life is limited.

Cabana explains that he wants to maximize the number of electrons moved per ion, “”The more times you can do this back and forth, the more times you will be able to recharge your battery and still get the use of it between charges.”  Maximizing the number of electrons moved per ion increases the energy produced while reducing the battery’s distortion from ion flow.

“Like a parking garage, there are only so many spaces for the cars,” Cabana said. “But you can put a car in each space with more people inside without distorting the structure.”

Proving that magnesium can be reversibly inserted into an electrode’s material structure is a step toward a prototype, and Cabana notes that, “It’s not a battery yet, it’s piece of a battery, but with the same reaction you would find in the final device.”

The University gives credit to the researchers on the project and to the agencies funding this research.  None of these projects seem to be garage science, but rather require dedicated researchers and substantial funding.

The Joint Center for Energy Storage Research (JCESR), JCESR is a major partnership that integrates researchers from many disciplines to overcome critical scientific and technical barriers and create new breakthrough energy storage technology. Led by the U.S. Department of Energy’s Argonne National Laboratory, partners include national leaders in science and engineering from academia, the private sector, and national laboratories. Their combined expertise spans the full range of the technology-development pipeline from basic research to prototype development to product engineering to market delivery. JCESR is a DOE Energy Innovation Hub supported by DOE’s Office of Science.

Additional support was provided by the Advanced Light Source DOE Office of Science awards DE-AC02-05CH11231, and DE-SC0012583. Use of the Stanford Synchrotron Radiation Lightsource, SLAC National Accelerator Laboratory, is supported by the U.S. DOE, Office of Science, DE-AC02-76SF00515. The UIC JEOL JEM-ARM 200CF is supported by an MRI-R^2 grant from the National Science Foundation (Grant No. DMR-0959470).

(Editor’s Note: Howard Handelman, a regular reader and constructive critic of the blog, sends this reminder that magnesium, like lithium, is highly reactive and can present a fire danger.   The notes and video are instructive, to say the least.)