Sonex and Gabriel DeVault have partnered to create an electric kitplane, marketing components for a different type of powerplant.  Sonex has been in the kitplane business since 1998 (having built from a decade’s-old earlier company) and Gabriel DeVault has been working with the electrification of aircraft for a decade.  Combining their expertise, we have a kit built path toward an inexpensive electric kitplane. 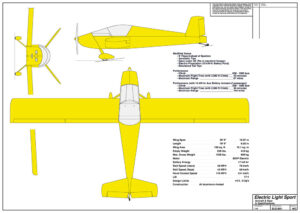 Gabriel commutes a lot by air, traversing the globe between his home in Watsonville, California and Cranfield, England for work on Zero Avia’s electrification of Dornier 228s – one in each country.  He flies between Watsonville and Hollister, California in his Zero Motorcycle powered eXenos, a kit built product from Sonex Aircraft in Oshkosh, Wisconsin.  Before that, he flew a Mark Beierle eGull powered with a Zero motor.  Gabriel was instrumental in the design and manufacturing of that motor, making him a bona fide expert on the powerplant.

His experience with the eXenos has led Sonex to market a motor/battery mount for their Xenos motorglider using DeVault’s Zaeoro (See what he did there?) electric propulsion package.  The conversion and demonstrated capabilities of the now electric aircraft impressed Paul Dye, editor-at-large of Kitplanes magazine, enough to cause him to start his own eXenos project.  Your editor knows of at least two other eXenos projects underway.

Converting a standard Xenos B to electric power is fairly straightforward, but with a few points unique to the differently-powered eXenos.

Because of the unique power requirements, eXenos becomes more than just a simple one-stop shopping trip.

Gabriel DeVault found a mostly complete Xenos, which the motivated builder had improved on with dimpled skins and flush rivets.  The rest of us can buy a kit from Sonex.  A complete Xenos-B airframe kit for $31,995.  Sonex has few options for the kit, with a checklist on their order form that allows a buyer to get a pre-assembled main wing spar ($4,000 extra) and variations on the cowling and engine mounts.  Sonex recommends keeping the standard cowling.  You will drop the standard engine mount ($2,180) intended for a Jabiru 3300 engine and replace it with the electric motor/battery mount. 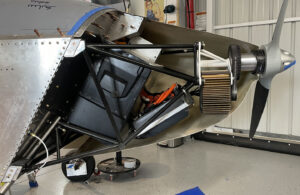 Gabriel worked with his friend Bob Mackey to fabricate a motor/battery mount and propeller speed reduction unit (PSRU).  Luckily for those wanting to follow in their footsteps, Sonex sells the mount for $2,995, but only for the standard landing gear model (who would want a tricycle-geared motorglider anyway?)

Gabriel sell the mount and belt assembly through his company, Flit LLC.   His contribution consists of the Zaero reduction drive, an electronic throttle control, and a Zero spline-to-TaperLock adapter. 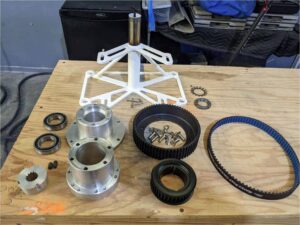 Components supplied in FLIT drive system.  The Gates carbon fiber drive belt is 50-percent wider than those on the Zero Motorcycle

Through FLIT LLC, Gabriel will provide motor mount/reduction drive units, throttle controllers and general advice to support other Xenos builders as-well as builders of other experimental aircraft types that can use this power package.

Zero, like many ground-bound firms, is reluctant to support its motors use in aerial applications.  Liability and litigation are fearful specters in the business world.  One can find used examples of Zero Motorcyles, strip them of their running gear, and recoup some of the cost from reselling wheels, tires, and the bike’s frame.  One ends up with an integrated set of components – motor, controller, a bespoke battery pack, and an instrument that monitors motor health and operation.  It even reports on airspeed for some spooky reason. 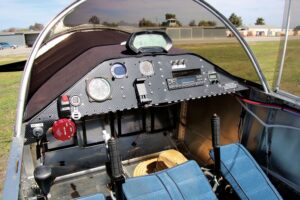 Since Paul Dye is crafting his own eXenos, look for on-line and print articles on his latest project.  He already owns a SubSonex personal jet and will explore the other end of the performance and fuel use spectrum with the electric motorglider.  Paul’s ability to carry a reader through the build process will be invaluable for newbies working on their own projects.

Follow Paul’s progress and that of Gabriel DeVault at www.Kitplanes.com/tag/exenos/.  They should be able to help builders navigate this brave new world of electrified flight.