Engineers at the Department of Energy’s Pacific Northwest National Laboratory in Richland, Washington have beat nature by millions of years in turning algal glop into crude oil,  cooking a “a verdant green paste with the consistency of pea soup” into oil, water, and a nutritious batch of byproducts.

Algae produces the hydro-thermally produced products on the right

Douglas Elliott, the laboratory fellow leading PNNL team’s research says, “It’s a bit like using a pressure cooker, only the pressures and temperatures we use are much higher.  In a sense, we are duplicating the process in the Earth that converted algae into oil over the course of millions of years. We’re just doing it much, much faster.”

“Faster” means an hour or less, researchers having combined several chemical steps normally associated with bio-fuel production into one continuous process.  Wet materials in this process reduce costly and time-consuming steps normally required to dry the algae.  This simplification, among other steps, makes the process commercially viable.

Elliot notes that, “Cost is the big roadblock for algae-based fuel.  We believe that the process we’ve created will help make algae biofuels much more economical.”

Admittedly small scale at this point, the process runs continuously, starting with about 1.5 liters of algae slurry each hour.  After cooking the algae for 350° Celsius (662° Fahrenheit) at a pressure of about 3,000 pounds per square inch for about an hour, the process yields about 50 to 70 percent of the algae as crude oil, some clean water, and fuel gas.  The water can be re-used to grow more algae and the gas can be burned to make electricity and power the process.  It could also be used to make natural gas for use in compressed natural gas applications.

According to PNNL, the system is “not easy or cheap to build,” but “cost savings on the back end more than make up for the investment.”  The process avoids the use of solvents such as hexane used in extracting oils from other algae-to-fuel processes, using hot water instead to convert the biomass to liquid and gas fuels.  This doubtless reduces costs associated with toxic waste storage and disposal. 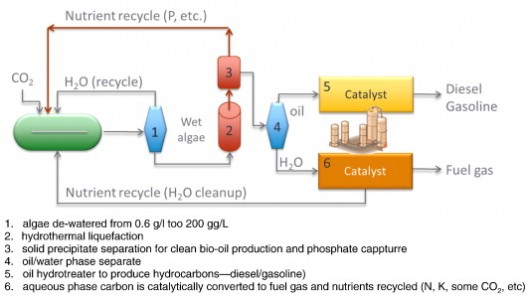 No inclusive life cycle analysis has yet been undertaken, but the reuse of clean water and nutrients for growing fresh batches of algae would add to the overall economy of the process.  The high temperatures and pressures involved, even for short periods, may be an offsetting factor In requiring large energy inputs.  Obtaining the source algae is a low-energy process compared to drilling for and refining crude oil, though, and having that source at the point of production eliminates the costs of transportation to refineries associated with normal fossil fuel extraction and processing.