Too Similar Not to Have Joined Forces

The PRNewswire.com press release lauds the acquisition of Airflow.aero by Electra.aero: “Hybrid-Electric Blown-Lift eSTOL Plane Developer Electra Acquires Airflow to Create a Leader in Advanced Air Mobility.”  The two companies have been developing similar multi-motor, blown-lift aircraft for the past few years.  Electra’s has eight motors distributed across its wingspan, Airflow’s has 10.

A Great Idea, but Better with Electric Power

This is not a new concept, having been demonstrated in the 1960s by French manufacturer Breguet and American McDonnell.  The 188 was a demonstrator that didn’t pick up any orders in either country.  The narrator explains propeller control was a mechanical-hydraulic process and no electronics were involved.  The complex system might have been a maintenance challenge airlines were unwilling to take on.  Electra.aero’s hybrid-electric approach might be the answer to simpler, reliable propulsion, essential for the multiply-driven propellers.

Combining order books, the team has almost 800 planes on order, “beyond break-even for commercial development.”

Both firms worked on eVTOL (electric Vertical Take Off and Landing) craft in past endeavors, and have been developing eSTOL (electric Short Take Off and Landing) airplanes.  Possibly, the enormous loads imposed on batteries during lift and hover operations dissuaded further efforts in the vertical world. eSTOL craft usually manage better range and payloads for the same power. 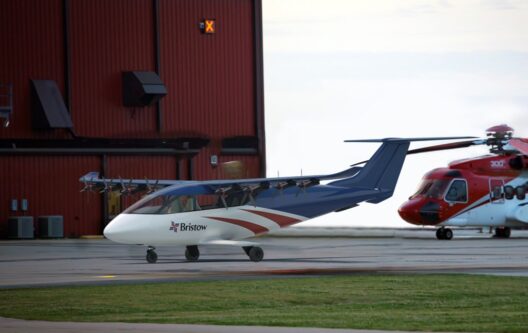 Electra.aero already had 50 orders from Bristow, a UK-based helicopter operation – up to now

Jessica Reed, writing for Aviation Today, answers one question about the respective firms’ future plans.  “Both companies have developed electric short take-off and landing (eSTOL) aircraft, and Airflow’s eSTOL business will now be consolidated into the Electra brand. Marc Ausman, co-founder and CEO of Airflow—now Chief Product Officer of Electra—believes that working together with Electra will be a much stronger approach for bringing their eSTOL aircraft to market. ‘We are combining the best of both worlds,’ he told Avionics International in an interview, “taking the best of what each company has learned.’ The most immediate objective for Electra is to fly a technology demonstrator within the next 12 months.”

Besides the difference in how many propellers send propwash over the wings and flaps, Electra’s product is fairly svelte and swoopy.  Airflow’s machines are boxy and functional looking for their anticipated large payloads.

Their mutual announcement shows the two companies will probably continue on their individual development paths, with solid orders for the two complementary types of craft shoring up the overall health of the combined enterprise.

Just before Pipistrel was acquired by Textron, it had formed a partnership with Airflow to provide motors, motor controllers, and battery systems for use in Airflow’s Model 100 and Model 200 aircraft.  The 100 will be able to carry four passengers or 800 pounds of cargo over 250 miles.  The 200 can carry nine passengers or a ton of cargo for up to 500 miles.  Both aircraft are claimed to be 100 percent carbon neutral.  Just how this partnership will continue, with both Airflow and Pipistrel involved with new partnerships, remains to be seen.

Regardless, the similar mission profiles for all the aircraft in the expanded Electra lineup show why the acquisition was seemingly inevitable.  Electra’s eSTOL craft will carry nine passengers and a pilot or 1,800 pounds of cargo up to 500 miles “in all weather conditions.”  The company claims their technology delivers 2.5 times the payload and 10 times longer range 70-percent lower operating costs than vertical takeoff alternatives.

Flying continues its report on the acquisition with compliments being traded between Electra’s CEO and its new CPO (Chief Product Officer). 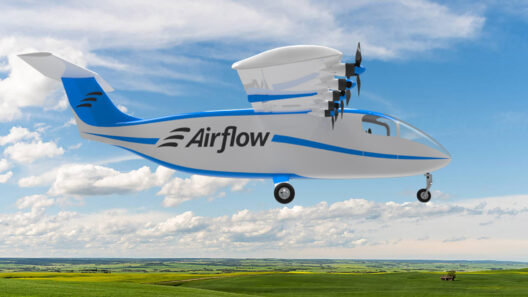 Marc Ausman, former CEO of Airflow, explains, “The Airflow team and the Electra team both have deep experience in the development and testing of battery-powered aircraft. This experience convinced us that physics and the economics both strongly favor a solution that uses a wing throughout the full flight versus a rotor-borne vertical takeoff and transition. Distributed electric propulsion allows us to take off and land within two vehicle lengths to access parking-lot sized spaces.”

Details of the amalgamation are not disclosed because both partners are privately-held companies.

A Long, but Worthwhile Talk

John Langford lectures at a symposium in Falmouth England, explaining his background and the origins of Electra.aero.  The video is over an hour, but well worthwhile.

Marc Ausman, now Chief Technical Officer for the newly-consolidated Electra.aero team was kind enough to clarify a line in the this blog entry.
“Their mutual announcement shows the two companies will probably continue on their individual development paths, with solid orders for the two complementary types of craft shoring up the overall health of the combined enterprise.”
Marc added this amended version: “We are going forward with one production aircraft that represents the best of what each company has learned. Right now we are showing two different designs, as you mentioned, and those will be merged into a single Electra design going forward.”
Marc and the Electra team will be at Airventure at Wittman Field in Oshkosh, Wisconsin for Airventure 2022, from July 25 through the 31st.   “We will be showing a small model this year and will be  part of the Air Force Agility Prime exhibit. In the future we’ll have full-size aircraft there”