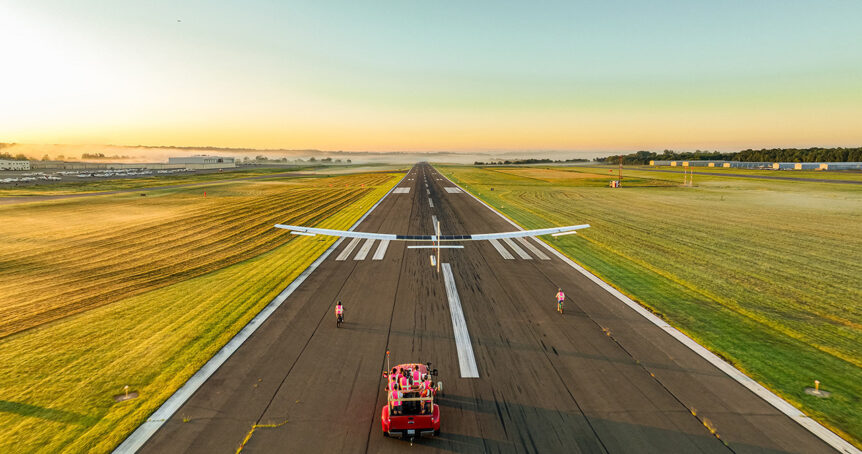 Dawn One is a solar-powered climate observatory, one of many to come and an outgrowth of a long career for John Langford, Electra Aero’s CEO, and collaborator with Professor James G. Anderson of Harvard University.

A seeming callback to John Langford’s human-powered aircraft from his MIT days, Dawn One is a 90-foot span unmanned aircraft system (UAS) destined to fly at stratospheric altitudes (49.000 feet maximum) while observing data for quantitative forecasts of risks in the climate.  We see its first flight from the Manassas Regional Airport in Virginia on September 9.  The assistants in hot pink  and orange vests are Hokies, part of Virginia Tech University, and whose name is explained in a lengthy Wikipedia entry.

The “solar-battery hybrid electric research aircraft” is part of the Stratospheric Airborne Climate Observatory System (SACOS) program.  The program will consist of “an ensemble of solar powered aircraft operating for months in the stratosphere,” each “ each “focused on critical climate observing missions that satellites or aircraft cannot fulfill.”  According to project leaders, SACOS missions will include:

The program takes note of something perhaps intuitively observed by many – rapid changes in climate.  Anticipating yet faster and more disastrous changes, SACOS intends to counter that scarcity by widespread observations of such changes.

Dawn One’s 289 pound flying weight means its 90-foot span carries only 3.21 pounds per foot. a fraction of that carried by even ultralight aircraft.  That allows Dawn One to cruise on a mere 700 Watts, model airplane territory.  Twin motors on short booms beneath the wings look sufficient to ensure a healthy rate of climb, and the low span loading enables long, leisurely cruises in the stratosphere.  Imagine a fleet of these craft deployed to provide rapid intelligence on weather developments and linking these observations into meaningful climate patterns.

Dawn One is part of SACOS, developed under the leadership of Professor James G. Anderson at Harvard University. The project is supported by a contract from the National Aeronautics and Space Administration (NASA) and by the Weld Foundation for Scientific and Environmental Development.  He and Langford collaborated on an early higher-altitude project, Odysseus for Aurora Flight Sciences and Boeing.

Dawn One is smaller, and in great numbers, could provide broader coverage of weather patterns being surveilled.  Professor Anderson explains, “The high-spatial resolution observations from SACOS will provide, for the first time, quantitative forecasts of risk associated with rapidly expanding wildfires, the increasing rate of sea level rise, the intensification of severe storms, and global shifts in arid regions that trigger water shortages. Moreover, these quantitative forecasts of risk will, in turn, establish the essential intellectual links directly coupling irreversible changes in the climate structure to economics, public policy, and associated societal instability.” 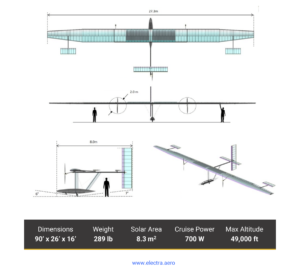 The Dawn One project originated at the Massachusetts Institute of Technology (MIT) led by Professors John Hansman and Mark Drela.  Drela was part of the team that developed Daedalus, the record-setting human-powered aircraft.   The craft. with a skilled cyclist at the controls, managed a 74-mile flight over water.   Detailed design, construction and testing of the aircraft was led by Electra. This solar-battery aircraft is part of Electra’s ongoing development of reduced and zero-carbon aircraft propulsion technologies, which also include turbine-electric and hydrogen fuel-cell based hybrid systems.  Future plans for this aircraft seem to include revised pod and motor fairings and the addition of more solar cells.

Langford’s Electra Aero has been responsible for final development of Dawn One, and has applied its specialized knowledge of lightweight structures, automated flight, and flight testing.  His previous firm, Aurora Flight Sciences, created many advances fully self-flying craft.  Dawn One is the first project to come from Electra Aero and its new development center in Virginia.  With his background, impressive accomplishments, and coterie of skilled partners, Langford’s latest endeavor should prove to further atmospheric knowledge.